Another â€œNew to the NRAâ€ item that caught my eye is the .300 Win Mag AR platform rifle by NEMO. In recent months the AR-platform has seen an explosion of offerings in the .30 caliber area, especially in the hot new .300 AAC BLK cartridge. NEMO is making a bold step into the arena and going for gold with the extremely powerful .300 Win Mag chambering found in their Omen rifle. 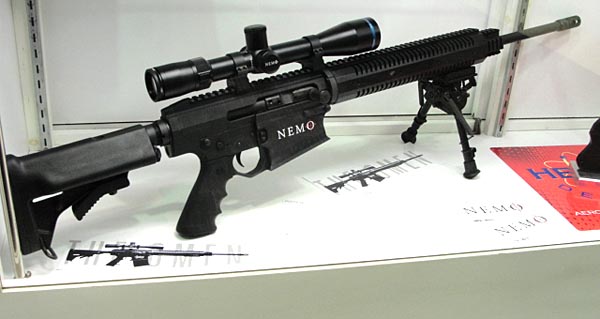 NEMO is a relative newcomer to the AR arena, but in looking this rifle over it appears that the designers and engineers are serious about quality firearms. NEMO stands for New Evolution Military Ordinance. The Omen, or Magnum Assault Rifle has taken several years in research and development to produce, but the wait sure seems to be worth it. The rifle was designed as an â€œadvanced weapon solutionâ€ for military special operations, and federal law enforcement.