Was it the ultimate in home defense or just a Brazil-born boondoggle?

The Taurus Raging Judge 28 gauge revolver certainly stood to be a unique big bore handgun in the US market. However, the project was eventually killed and the gun was never made available to the American public due to legal technicalities.

Let’s take a closer look at the 28 gauge Judge that promised so much, yet failed to sell a single unit.

Introduced at the 2011 SHOT Show, the Raging Judge was a surprise to all of the attendees when it wasÂ announced. At that time, the original Judge and its spin-offs were selling well. However, there had not been any hint from Taurus that a new caliber would be introduced.

The gun was a real eye catcher at the company’s show display. At nearly 4.2 pounds, the gun was massive. It had a 6.5″ vented barrel and a huge 5-shot cylinder.

Taurus stated the Raging Judge had a frame made of “strong, ordnance grade steel.” Ordnance steel is a term that typically refers to 4140 steel. 4140 is commonlyÂ known as chrome-moly steel. Chrome-moly is a tough steel and isÂ a carbon steel, not stainless. 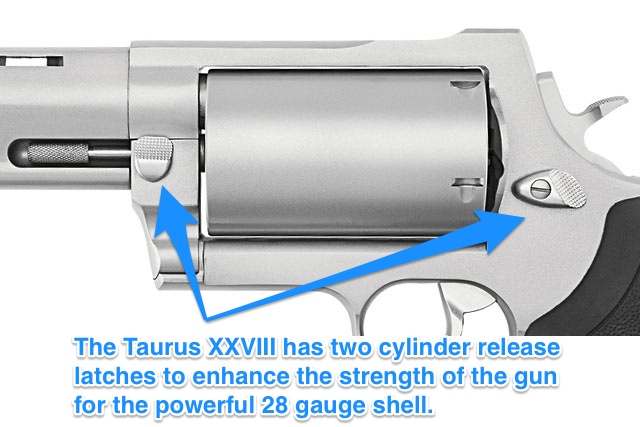 The cylinder used a double lock-up with latches on the crane and behind the cylinder. The same style of locking is used on the company’s Raging Judge Magnum that is chambered for the .454 Casull.

The gun was to be available in both a matte stainless finish and a blued finish. Taurus has a remarkably good bluing process, and this gun would have looked great with it. As it was, the only gun on display at the show was in matte stainless.

Alas…It Was Not to Be

Unfortunately, the Taurus M528 never made it into production. The gun on display was a prototype designed to generate interest in buyers at the SHOT Show. While a great deal of interest suggested the XXVIII would be an excellent seller, federal laws would ultimately prevent its importation.

Under US federal law, the gun could be interpreted as either a shotgun or a handgun. Either way, the revolver would not be allowed for sale to the general public.

Technically, it would be possible to have a 0.50″ barrel that would act as a full-length choke for shotshells. While this would meet the bore requirement for a handgun, it would also further illustrate that the gun is more shotgun than pistol. After all, what handgun has a choke?

During the SHOT Show, there were rumors that the BATFE visited Taurus and seized the 28 gauge Raging Judge. The fact that the gun was not on display for the second half of the show certainly suggested the rumors were true.

However, the American Rifleman’s Mark Keefe reported that nothing of the sort happened. Rather, Taurus had invited the BATFE to their booth for a sit down about the gun to ensure they made it in a way that would allow importation.

Regardless of the truth regarding the BATFE visit, the gun was not shown again in public.

In March of 2011, then-CEO of Taurus USA Bob Morrison told radio host Tom Gresham that the gun was still in development. Morrison stated that Taurus was working with the BATFE to make sure the gun met all legal requirements.

When the April 2011 NRA show rolled into town, however, the gun was not on display. Taurus reps began saying that the gun would not be manufactured. The gun that had graced the cover of the company’s catalog was gone, and Taurus even rushed a catalog with a new cover into production.

No statement was ever given by the company on why the gun failed to enter production.Â In the end, it seems the legal requirements wereÂ inflexible, and there was little Taurus could do to make the gun legal for sale in the USA.Â To my knowledge the gun never entered production, and none were made beyond the prototype(s).

It is not known where the prototype(s) may be now.

I would buy this revolver in a new york minute.

I’d love to have one of these .