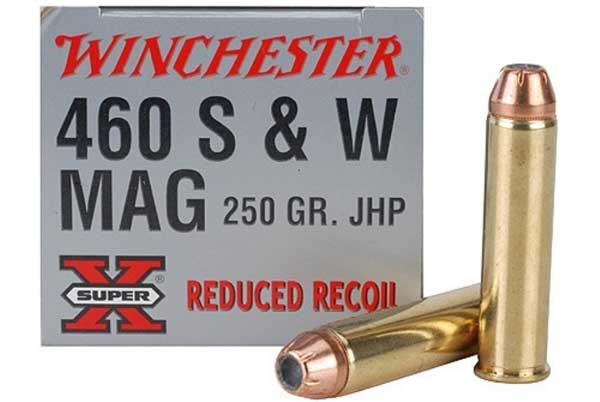 Winchester Ammunition introduced a reduced recoil loading for the .460 S&W Magnum cartridge. Winchester claims an almost 50% reduction in recoil compared to their other loads, but still throws a 250 grain JHP at 1450 fps. Â This works out to be about 1167 ft-lbs of energy.

By way of comparison, the Winchester 260 grain Partition Gold load in this caliber uses a slightly heavier bullet (260 grains) at 2000 fps. Â This works out to be a little more than 2300 ft-lbs of energy. Â Stepping down a little,Â Winchester’s .44 Magnum cartridge launches a 250 grain JHP at 1230 fps. Â So this load is going to be more powerful than a .44 Magnum, but will be significantly downloaded from the top .460 S&W Magnum loads.

Winchester recommends this load for hunting hog, deer, elk and similar sized game. Â I would expect this load would be acceptable for black bear as well, but that choice is up to you. Â Expect to pay about $2 per round for these cartridges.

No one would claim the .460 Magnum is a good plinking round, but for developing the skills to better handle this cartridge in the field, these are not bad loads to work with. I’d personally start a shooter out with something even lower power, such as the .45 Colt (which can be fired in a .460 S&W Mag revolver,) first. Then once they had mastered that cartridge, I would move them up to either moderate powered 454 Casull or these loads. It would just depend on their shooting skills and experience.

This load should be enough for medium game such as whitetail deer. I would also be comfortable in taking wild hog with it. The round should penetrate deep enough and cause enough immediate damage for a clean kill. However, you want to make sure you can deliver the shot, as the margin of error is much smaller that with a more powerful loading in this caliber.