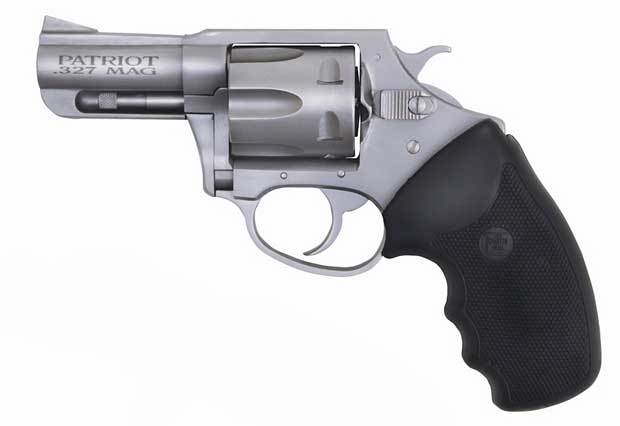 The Charter Arms Patriot was a short-lived line of revolvers chambered for the .327 Federal Magnum. Â In all, three Patriot models were manufactured between 2008 and 2011. Â The three models were the standard model, the Target Patriot and the Crimson Patriot.

The standard model patriot was a 2.2″ barreled revolver with a cylinder that held six shots. Â It had a fixed ramp front sight and a foxed notch rear sight.

Due to the relatively short barrel, it appears the gun was designed for concealed carry. Â Unlike the company’s Off Duty revolver, the Patriot had an exposed hammer, allowing the shooter to work the gun in double-action or single-action modes.

The standard Patriot revolver weighed 21 ounces while unloaded. Â Rubber grips were standard on the gun. Â Charter Arms only offered this gun with a satin stainless steel finish. 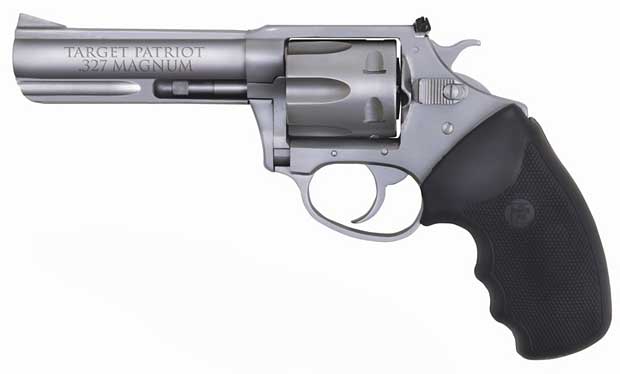 This version of the Charter Arms Patriot features a longer barrel (4″ vs. 2.2″) and has an adjustable rear, target-type sight. Â The barrel has a full length underlug, which is likely to help tame the recoil of the little magnum cartridge. Â The Target Patriot carries a $593.00 MSRP. 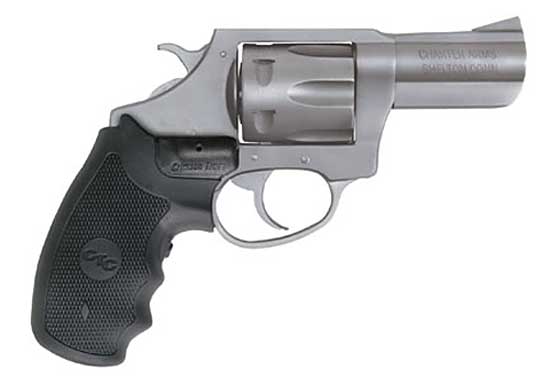 The Crimson Patriot was also chambered in .327 Federal Magnum and had a 2.2″ barrel. Â The gun shipped from the factory with the Crimson Trace LG-325 Lasergrips.

The Crimson Patriot shares many of the features of the standard Patriot revolver.Â  The Crimson Patriot is a six-shot, exposed hammer revolver made of stainless steel that weighs 21 ounces unloaded.Â  It has fixed sights, using a ramp front and notch rear.Â  The big difference is the addition of the rubber overmold Lasergrips.

The Patriot revolvers were discontinued by the end of 2011. Â Charter Arms did not make any announcement regarding why the handguns would no longer be produced. Â I can only assume that the line was canceled due to sales. Â If the company was selling a boatload of them, I would expect that Charter Arms would have continued the production. Â It looks like the total time these revolvers were made is about three years.

Here are a few videos of the Charter Arms Patriot being shot:

Charter Arms introduces the new Patriot in .327 Federal caliber with 2.2 barrel fixed sight and 4â€ barrel with adjustable sights to their extensive line of quality revolvers. The new Patriot .327 features a stainless finish and full-sized grips.

Built on the same frame as the popular â€œBulldogâ€, the new 4â€™â€™adjustable site model is an excellent choice for shooters who are looking for a revolver for target shooting and maintaining proficiency, the front target sight and square-notch rear sight provide a crisp, clean, sight picture for improving accuracy.

The 2.2â€ barrel model will prove to be a reliable and potent carry gun, If you like punching the center out of targets or popping tin cans on a Saturday afternoon, the new Patriot will be an accurate and affordable addition to your collection.

If any of you have had to interact with customer service at Charter, Ruger, or Taurus — can you please comment on how accessible, helpful and responsive they were (or were not)? Given any .327 handgun is still a fairly new production and “bugs” are possible, I’d like to buy from a manufacturer with good customer service. Thanks in advance!

Can I still find a 327 Patriot. I would like to have one from Carrie you know anyone who may have them in stock.
Frank Flores
Thank you
USN Vietnam Veteran

Charter Arms discontinued the Patriot. However, Ruger makes the SP101 in .327 Federal Magnum. I couldn’t find the 3″ carry version of the gun in stock anywhere. You’re best bet might be to talk to your local dealer and see if they can put one on order for you. I hope this helps!