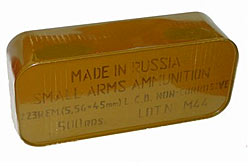 During the past few days, there has been a firestorm of questions and panic on the Internet forums regarding the US government banning all Wolf ammo from being imported into the United States.Â  A lot of the information thrown out there is incorrect.Â  To make it perfectly clear:

On August 4, 2006, the U.S. Department of State announced sanctions against Rosoboronexport, because the Russian government, who controls Rosoboronexport, violated the Iran Nonproliferation Act of 2000.Â  In December 2006, the ban was confirmed and extended two years.Â  The ban prohibited the United States government, not its citizens, from doing business with Rosoboronexport.

On October 23, 2008, the U.S. government announced a new two-year ban that prohibits itself from doing business with Rosoboronexport.Â  This ban relates to Russia selling anti-air missles to Iran, presumably to defend against air-raids on the Iranian nuclear programs.Â  The new ban is, in effect, simply an extension of the old ban that is set to expire in December 2008.Â  Again, this ban only prohibits agencies of the U.S. government from doing business with Rosoboronexport.

So, unless you are (1) looking to buy Wolf ammo as an agency of the United States, and (2) wanting to buy the military ammunition exported by Rosoboronexport, this ban does not directly affect you.

I have also read that the ban applies to all Wolf-branded ammunition from the Tula arsenal.Â  Not true according to the Wolf PR folks at the Tula Cartridge Works.Â  After conversing with the people actually at Tula (their English is better than my Russian), they confirmed that only military manufactured ammo (regardless of which factory) is affected by the Rosoboronexport ban. The Wolf staff said the civilian ammunition made at Tula is unaffected.

Indirectly, the ban may affect you because a lot of people: read a post at one of the forums, thought the sky was falling, and ran out to buy up all of the Wolf ammo they could find.Â  This certainly cannot help ammo prices.

One last thought… the executive branch can place a large variety of import bans in place that DO affect the supply of foreign made ammunition and firearms.Â  These bans do not go before Congress and can be made at any time without any real “due process.”Â  So, if you have a firearm that depends on imported ammunition or uses imported magazines, I humbly suggest stocking up prior to January 20, 2009.

2 replies on “Wolf Ammo Ban Does Not Exist!”

FYI, I returned from a rifle club range this morning that leases it’s property from the Los Padres National Forest. I was approached by the range manger while shooting .223 Wolf ammo. The range manger asked if she could check my bullets for “steel.” I told her no problem. She placed a magnet next to the bullet (not the cartridge) and sure enough all the bullets in the box of ammo that I had open reacted positively to the magnet. She then checked my son’s Wolf .45 ammo with the magnet and got the same results. She then informed us that the Los Padres National Forest has “banned” all ammuntion whose bullets (not cartridges) contain steel and that we had to immediately cease using our Wolf ammo. From what I was able to learn the national forest authorities are worried that bullets containing steel could spark a fire. That is to say a steel bullet striking another steel bullet laying close the surface of a berm may start a forest fire. It was the range manager’s opinion that this ban extends to all national forests throughout the country.

Note: My son and I checked our Wolf ammo boxes and there is no mention anywhere that the bullets contain steel. I have no complaints at all with the range manager as I had other ammo with me and they did not react at all to the magnet. This leads me to believe the Wolf ammo does contain “steel.”

I hope this message helps those of you who plan to shoot on federal land to be aware of the “steel” bullet ban.

Except the yellow and black boxes, wolf ammo is steel jacketed with a thin, thin, thin layer of copper on top of the jacket. If you ever dig up a round, you’ll notice the mangled jacket is steel on the inside. As for this causing a fire in a park? Seems a lot less likely than campfires, cigarettes, etc. starting a fire. The berm is dirt and the sparking is typically going to be subterranean, and the sparking is pretty minimal.

I have a very small berm at my own home in a field that is quite dry during the summer. Thousands of rounds with steel core ammo later, no forest fire started. The concern is definitely there, but a ban is a bit silly.