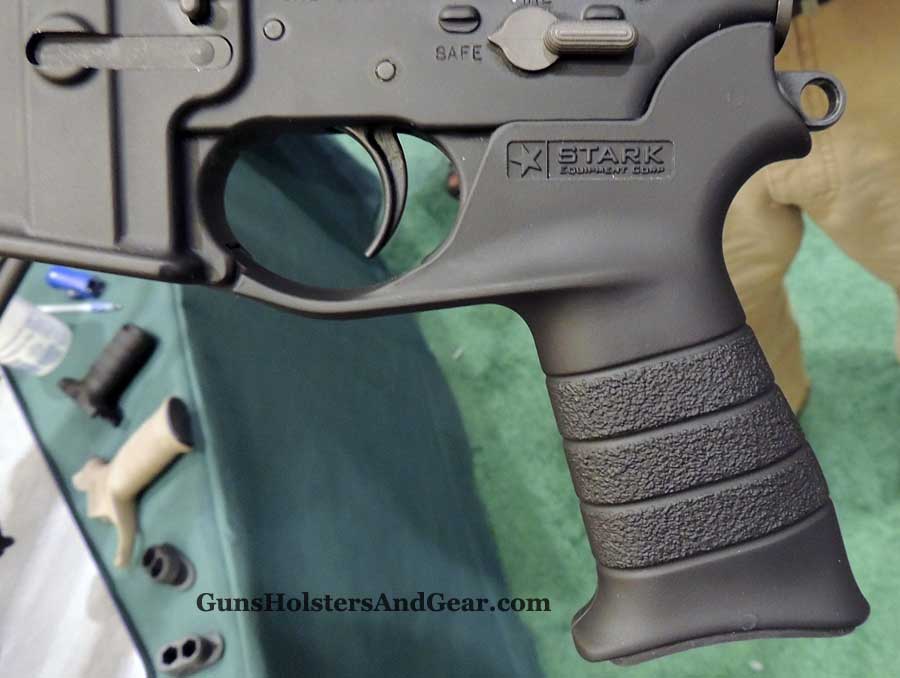 The Stark Equipment SE-1 is a polymer grip that replaces the standard AR-15 grip and trigger guard with a single polymer unit.Â  At the 2009 SHOT Show, I had a chance to preview the Stark SE-1, and I was impressed by the look and feel of the floor samples.

Stark Equipment is now shipping the SE-1, and I was able to get one of the early production grips.Â  I am just as impressed by the production model as I was by the samples.

The SE-1 feels good in my hand, with just the right amount of palm swell and what appears to be a good grip angle.Â  The Stark grip features three texture rings around the center of the grip, providing good adhesion to the hand.Â  There are also grooves around the textured rings.Â  These grooves are designed to allow fluids, such as sweat and rain, to flow away from the hand and not disrupt the mating of the hand to the grip.

There is a removable rubber plug on the bottom of the grip that allows you to store two CR-123 or AA batteries for any light or optics accessories you may have.

The SE-1 is available in black, dark earth, or OD green.

Features of the SE-1 include:

I will be replacing my current AR-15 grip with the Stark SE-1 for a full test in the near future.Â  When I do, I will post some photos and a full review of it.

Update: Since the original introduction of the Stark SE-1, the pistol grips have become quite popular and are not standard equipment on some factory builds.

Stark EquipmentÂ announced their pistol grips and vertical grips are now available with ArmorSoft. Â ArmorSoft is a surface treatment that “which gives Stark’s patented grips a soft, non-stick, velvety smooth feel for an ultra-sure grip with or without gloves.”

ArmorSoft is chemical and weather resistant. Â The grips are available in black, earth, green and digital desert camo.

I tested one of the original Stark AR pistol grips and found it to be comfortable and durable. Â If you are building your own rifle, or just don’t like that grip that’s on your gun now, take a look at the Stark grips.