Smith & Wesson is updating one of their best selling handguns:Â  the model 642.Â  The 642 is an aluminum framed .38 Special revolver that is carried by thousands of cops and armed citizens as a pocket or ankle gun.Â  In fact, it may be the most popular back-up gun in the United States.

The new 642 has a pinned, black blade front sight, the standard fixed rear notch and the seemingly “hammerless” fully enclosed hammer.Â  Unloaded weight is only up to 16 ounces, and the overall length is 7″.

As a very nice extra, S&W is including Tuff Strips with the new 642.

Although the current 642 may hold a slight edge for pocket carry, I have to say I really like the idea of this update to the 642 line.Â  The extra barrel length can add critical velocity to the .38, which is what I consider a ‘bare minimum’ for defensive work.Â  Additionally, the extra length can help tame the sharp bark of +P rounds fired from the lightweight revolver.

MSRP is set at $640.Â  I expect that S&W will be showing these off at the 2010 SHOT Show.Â  GunsHolstersAndGear.com will have photos and videos from the Smith & Wesson booth of this and other new products. 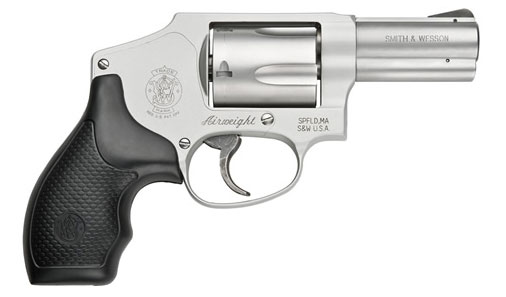 The longer barrel S&W 642 wound up being dropped from the company’s catalog. Â No reason was announced, but I would assume sales were not high enough to warrant the continued production of the revolvers. Â This is unfortunate, but not surprising. Â There is no information regarding any possible re-introduction of the gun, or if Smith & Wesson has any plans for other variations on the 642 revolver beyond custom grips (such as the Crimson Trace Lasergrips the company offers.) Â If we are able to obtain additional information on this gun’s demise, we will be sure to update this article.

Nice looking j-frame! I think it would look best in matte black (as a 442), without the internal lock, and with an XS front sight.