Olympic Arms had their new Gamestalker rifle on display at the 2010 SHOT Show.Â  The Gamestalker is an AR-platform rifle chambered in .243 WSSM, .25 WSSM and the brand new .300 OSSM (scroll down for more information on the cartridge.)

The Gamestalker features a 22″ barrel, free floating aluminum handguard, ACE skeleton stock and an ERGO “Fat Boy” grip.Â  The upper receiver has a flattop for easy installation of your choice in optics.Â  The rifle weighs 7.5 pounds and has a camouflage pattern.Â  It ships with one, seven-round magazine.

The rifle has a retail price of $1359, but expect street price around $1200-1300. Â Olympic Arms staff state the rifles are in production now, but supplies will be limited initially due to the amount of time needed to properly apply the camouflage pattern.

The Gamestalker feels well balanced and solid.Â  According to one staff member who has taken it shooting, the recoil is less than a .30-06, and it is an easy gun to carry into the field. Â If you are in the market for a North America big game hunting rifle, check out the Gamestalker. 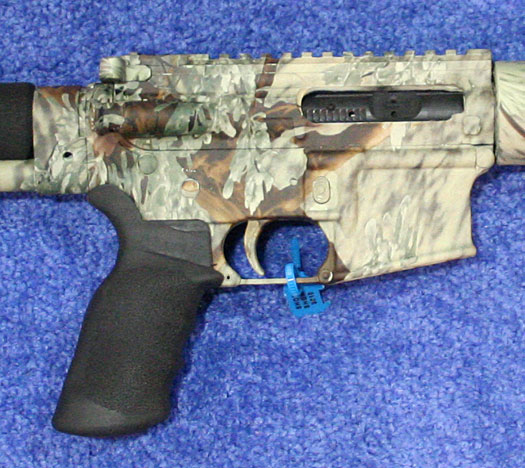 Olympic Arms introduced a new cartridge: the .300 Olympic Super Short Magnum.Â  According to Olympic Arms staff, the .300 OSSM is a .308 bullet in a shortened WSSM case that was designed to shoot out of a standard AR-15 platform.Â  The result?Â  A cartridge capable of taking any game on the North American continent that can be shot out of a handy, lightweight rifle. Â That is a fairly bold, and exciting, claim from OA.

Introduced in conjunction with the Gamestalker rifle (see additional information here), the .300 OSSM is specifically designed for big game hunting in North America.Â  The cartridge is capable of launching a 150 grain, .30 caliber bullet at more than 3040 fps from a 24″ barrel.Â  In a 22″ barrel, the same bullet is traveling at just under 3000 fps.

Currently, ammunition is available directly from Olympic Arms, but will soon be available from HSM, who helped develop the cartridge.Â  Three loads are available now:Â  110 grain V-MAX (at 3400 fps), a 150 grain Speer Grand Slam (at more than 3000 fps) and a 150 grain Sierra boattail (at more than 3000 fps.) Â These loads should be good for taking a wide range of game in the United States and Canada. Â I know several people who have had a great deal of success with the Speer Grand Slam bullets, and I know that the Hornady V-MAX have worked well for me in the past for hog hunting.

Hornady Manufacturing is already making dies for the .300 OSSM, so handloaders will be able to get to work immediately with this load. Â Although some people might figure this load to be a niche caliber, and I suppose it is, it really has the opportunity to grow into a cartridge with a good following. Â The AR-style rifles are becoming extremely popular in hunting, and having a big game cartridge for the platform – with just a upper swap – will be very popular with some people.

I’m from California. Is the 300 going to be available in my state?

No idea, sorry. You may want to contact Olympic Arms directly.

Rick I am from California to. If you already have a california legal lower reciever you can just get an upper.
Another option is to build your own upper reciever and spin on a 300ossm barrel.