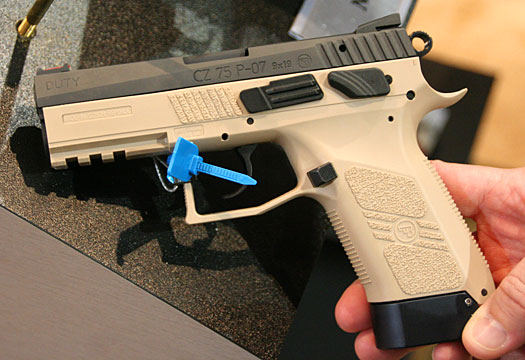 At the 2010 SHOT Show, CZ showed a concept pistol that the company may begin selling later this year.Â  The pistol is a tactical version of the P-07 Duty pistol that is, as yet, not named. Â (Ed. note: Â Scroll down to the update for more information on this pistol.)

The pistol is chambered in 9mm, and will feature a threaded barrel for the addition of a sound suppressor.Â  Suppressed models will have elevated sights.Â  The new P-07 has a tan polymer frame, but other colors (OD, foliage green, flat dark earth, scorched earth, etc.) may be offered. 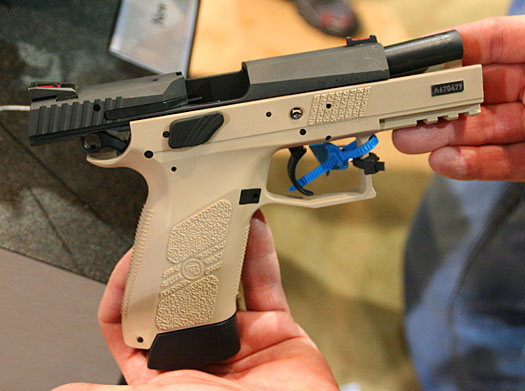 Update: Â This precise gun was never introduced by CZ. Â Too bad, as I found that the gun had a great combination of features and cosmetic attractiveness that I believe would have made it a very good seller for the company. Â However, variations of the gun were rolled out – just not this specific collection of features on a single P-07 Duty pistol. 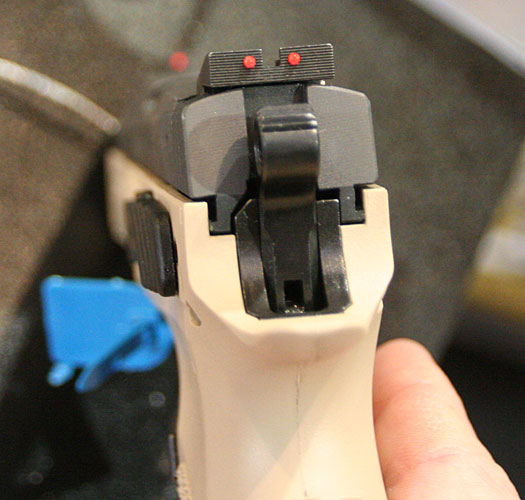 The fiber optic sights were very bright on the sample P-07 Tactical that was at the SHOT Show. Â The almost literally jumped out at you. Â I personally would prefer a fiber optic front with a plain black rear sight. Â That helps eliminate any visual confusion in an actual tactical situation. 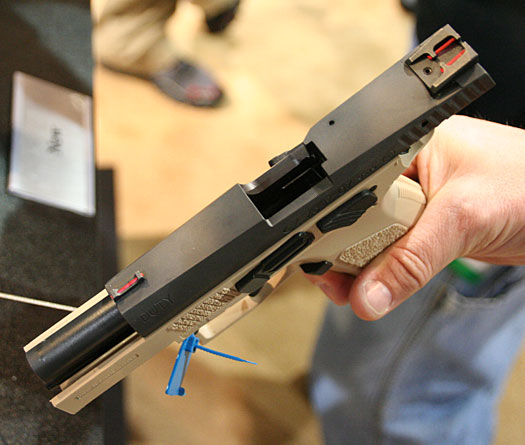 The pistol feels good in the hand and just looks good. Â I have reviewed the P-07, and found it to be a reliable pistol. Â I did not like the trigger reach, but that is a subjective thing. Â If that reach is ok with you, the P-07 is an awesome pistol. 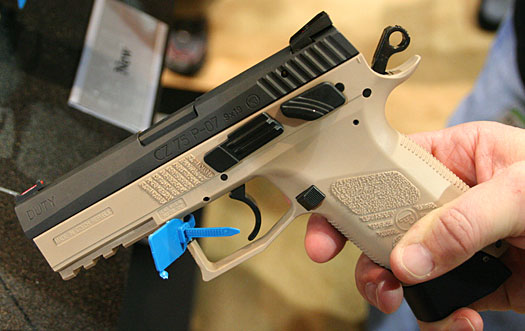 I was with Richard at SHOT SHOW 2010 and tThis was a really light-weight and extremely comfortable pistol to hold. I’m hoping these become available soon. They’re sleek and have some great features for a modern pistol. This is a great addition to the CZ family of guns.

Something to add on this pistol review. This is a DA/SA pistol with a 12+1 capacity. It has a decocker and manual safety. The tapered barrel is great for looks and making it lighter. The ergonomic suregrip pistol grip felt great in my hands and the enlarged magazine release button made magazine changes extra quick. The button does not get in the way of a solid grip on the pistol either. You’ll also note that the magazine has an extension on the bottom. This was designed to also aid in fast magazine changes. The Picatinny for end is great for the tactical community or patrol officers looking for a simple light solution to those low-light shooting scenarios. Matt Hunter of CZ told me that there will be a simple replacement on the standard safety that will allow for “cocked and locked” carry mode. Again, a very cool pistol that I’d like to fire a few hundred rounds through.

Bought one in black a few months ago, but can’t carry it concealed because no one makes a dedicated holster for it. Some of the makers say they do, but they are trying to pass off holsters for other makes–because they ‘almost, kinda, just about fit’ type of thing.

As great as this weapon is, Now I wish I’d bought something more common so I could carry it concealed.

CZ-USA has had holsters for the Duty for a couple years now.

Look at my albums for more pics.