Ruger announced the new Mini Thirty Tactical rifle today. Â Chambered in the 7.62×39 cartridge, the new Mini-30 has a 16 1/8″ barrel, synthetic stock, ghost ring sights, and flash suppressor. Â The Tactical ships with one 20-round magazine for this rifle.

Ruger machined scope bases into the receiver, and includes a set of scope rings. Â This makes things a lot easier for a shooter who wants to add a scope or other optic to the rifle. Â The 7.62×39 cartridge is certainly capable of taking medium sized game, and dropping a nice Leupold scope on top of this will give you good accuracy for taking that white tail.

Compared to the standard Mini Thirty, the Tactical has a barrel that is almost 2.5″ shorter. Â This makes the gun a little handier for moving around, which could be useful in a home defense situation or if the Brits ever come to collect back taxes (that might be closer than you think, by the way…)

Additionally, the barrel and receiver are a blued alloy steel instead of a matte stainless steel. Â After all, everyone knows a true tactical model has to be black, otherwise it just isn’t operator enough. Â The ‘standard’ Mini Thirty rifles don’t have the flash suppressors that the Tactical does. 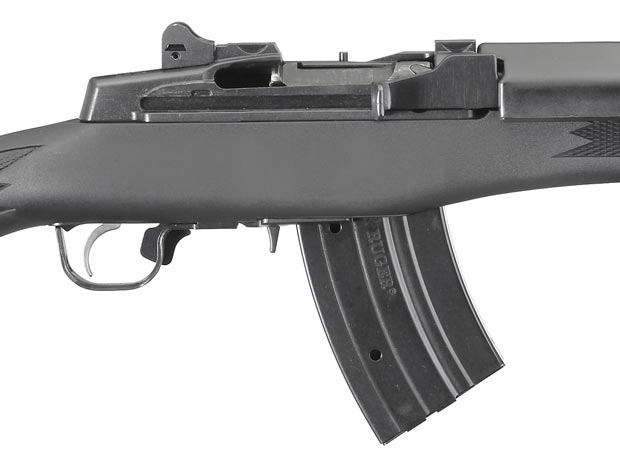 MSRP for the new Mini Thirty Tactical is $921, which is less than the $949-966 price tags on the other Mini Thirty variants. Â And no, it is not California legal.

The tactical version of the Ruger Mini Thirty rifle is still being sold, suggesting sales have been good for the company. Â The suggested retail price has gone up slightly in the past three years. Â MSRP is now at $989. Â This makes it only slightly more expensive ($10) than the standard model and $50 less than the model 5853, which has a stainless steel finish and an 18.5″ barrel.

if the new mini 30 tactical was a 5 or 10 shot clip would it be avalibal in Comy fornia?

No, it’s the “flash hider” on a detachable-mag long gun that makes it illegal in CA. If the flash hider was replaced with a compensator or removed altogether, then it would be CA-compliant.

Thanks for checking in. California’s laws make my head hurt, and I can never keep them straight. Feel free to chime in any time.