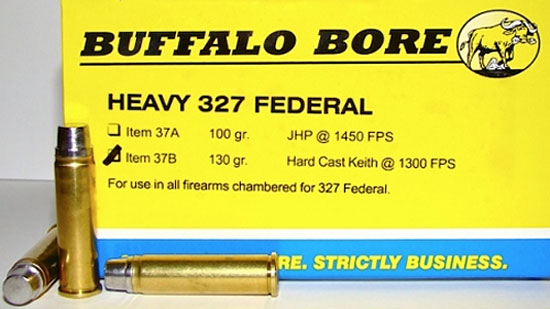 Buffalo Bore recently introduced two new loads for the .327 Federal Magnum. Â The first is a 100 grain JHP while the second is a hard cast 130 grain Keith-style load.

The 100 grain JHP load appears to use the Hornady XTP bullet, which has a thicker-than-typical jacket. Â The thick jacket allows for deeper penetration than might otherwise be expected from another brand of hollowpoint. Â The load is rated at 1800 fps from a test barrel. Â From a Ruger Black Hawk with a 5.5″ barrel, the load made for 1466 fps at the muzzle, and Buffalo Bore rates the load as 1450 fps.

The 130 grain hard cast load uses a solid lead, semi-wadcutter bullet. Â The bullet is heavier-than-typical for the caliber and is designed for deep penetration. Â This load would be excellent in a lever action rifle as a trail gun.

From a test barrel, the 130 grain bullet is pushed to 1700 fps. Â Using the same Ruger Black Hawk from above, the bullet makes 1391 fps at the muzzle. Â Buffalo Bore rates the load at 1300 fps in their literature.

I am glad to see that there are some additional variety in the ammunition options for the .327 Federal Magnum. Â I think the cartridge has a lot of potential, and when companies like Buffalo Bore step in to support the cartridge it suggests there is demand in the marketplace for these loads. 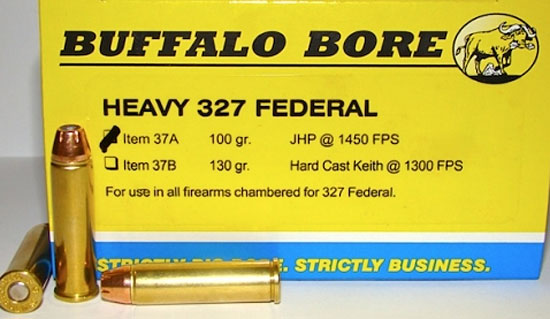 Checking the Buffalo Bore website, the company is still selling both of these loads several years after their introduction. Â The MSRP on both of these ammo loads is $30.18 currently. Â I haven’t tested any of this ammunition, but Buffalo Bore manufacturers some very good ammo. Â I’d like to hear feedback from anyone who has tried either of these two loads. Â Has anyone out there run some of this ammo in their own .327 Magnum revolvers? Â I bet that JHP load would make for a very good self defense load, while the hard cast load would probably make a good small game load – especially if someone would make a lever gun in this caliber.

Oh, and in case you were thinking the 327 Mag was a failed cartridge, Ruger re-introduced the SP101 revolver chambered for it. Now I just wish someone would make a lever gun for the cartridge.

I’m taking several strips of the 130 gr BB hard caste for my 327 federal magnum Ruger SP101, as a backup sidearm for archery feral hog hunting. It’s the only handgun I have, and the best load for that gun for that potential work. Thank you Buffalo Bore for supporting the .327 federal magnum!