Two versions of the new M&P rifle will be available: one with aÂ Realtree APG finish (shown here) and one with a black finish. Â The Realtree version of the M&P15 will featureÂ a 5/8-24 threaded barrel along with an A2-style flash hider, while the black version of the rifle will use a Yankee Hill flash hider. Â Both rifles will have a 16″ barrel.

The black version of the 300 Whisper rifle will have a free floating, 10″ quad rail for accessory attachments. Â Both rifles are “optic ready” with a Picatinny rail for the addition of traditional or electronic sights.

Both the 300 Whisper and the 300 BLACKOUT cartridges are designed to work well with suppressors. Â According to Smith & Wesson, “The feed ramps and gas system have been optimized to run effectively with a full-range of factory loaded sub-sonic and supersonic ammunition, both suppressed and unsuppressed. The barrelâ€™s twist rate is compatible with a wide variety of bullet weights from 110 to 220+ grains.” 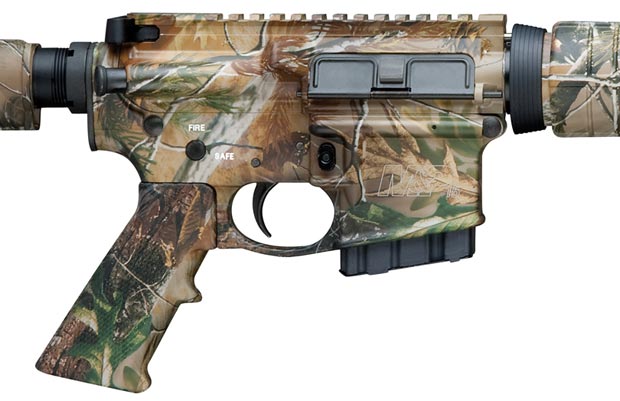 For a time, S&W offered uppers chambered for the .300 Whisper cartridge, but right now it does not appear the company is selling them. Â A single reference on the company website states that the uppers are “out of stock” and lists a MSRP of $819. Â The upper pictured matches the uppers that used to be sold on the non-camo version of the rifle (black and using the Yankee Hill flash suppressor.)

Here is the current Smith & Wesson literature on the .300 Whisper upper: