I recently came across Black Aces Tactical, a Florida company making quad-rails for the Remington 870/1100 and Mossberg 500/590 shotguns.

The rail system is a single piece made from 6061-T6 aluminum alloy weighing about 16 ounces.  The rails are black anodized (type II). The rails will accept any standard AR-type accessories: lights, lasers, coffee makers, whatever.

Black Aces Tactical states felt recoil will be reduced by about 15%.  There is not a specific explanation on the website on why this is, but I imagine the additional weight on the top and end of the gun help reduce the recoil impulse and muzzle rise.  An extra pound may not seem like much, but think about how much extra recoil you feel when you drop a pound from a rifle or scattergun.  So the recoild reduction of weight is not to be underestimated.

According to Black Aces Tactical, the shotgun rails only take about ten minutes to install.  The quad-rail system will fit both tapped and untapped receivers.  The installation kit comes with the tools needed for installation.  Supposedly even an old cretin like me can figure it out.

The rails are made in the USA.  MSRP on the rails is $179. Considering a Surefire shotgun forend with light typically runs between $380-440, a $139 rail system that allows you to add any light you want is definitely attractive. 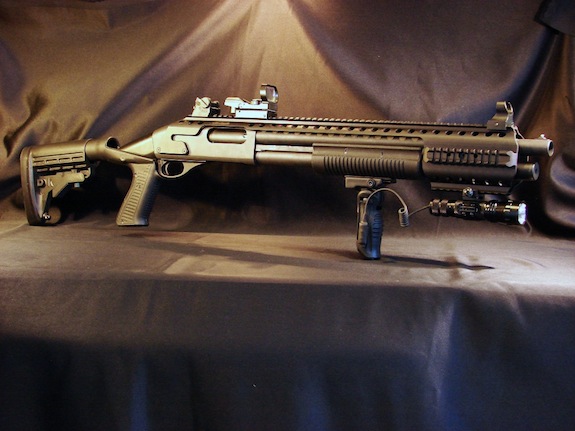 If anyone has installed one of these systems, I’d love to hear about it.  Drop a note with some feedback in the comments section below.  I’m sure that there are a lot of people who would like to get your thoughts on the rail system before they spend the money and time on one of these Black Aces systems.  Real feedback, from real people is important. 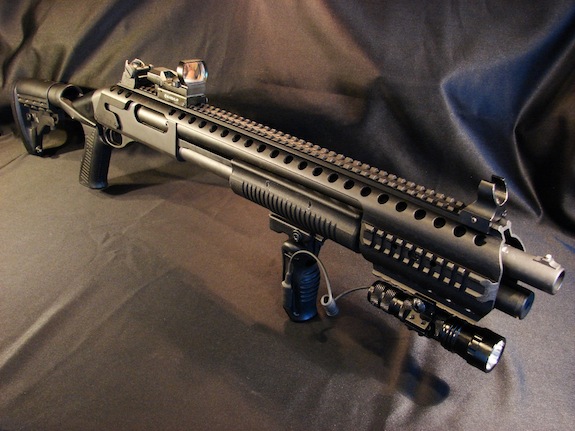 The Remington AND Mossberg versions are available right here!!: