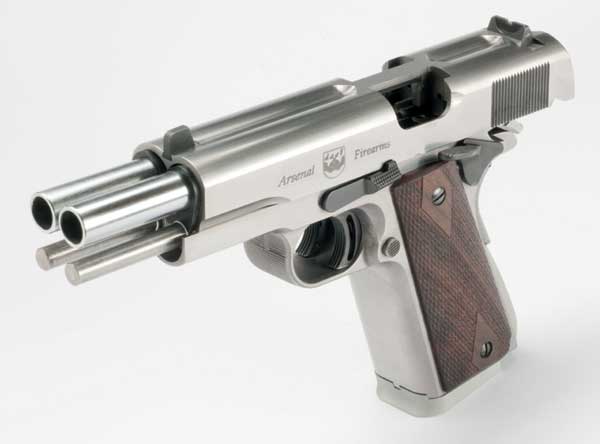 In the greatest case of “Because we can” manufacturing, Arsenal Firearms introduced the AF2011-A1 pistol.  The AF2011-A1 is a double-barrel 1911 pistol complete with dual triggers and dual magazines.

Major props to Arsenal for developing the gun.  I can’t imagine that working out the physics of this pistol was easy.  I’m certain more than just welding two 1911’s together takes place to make this a viable platform. 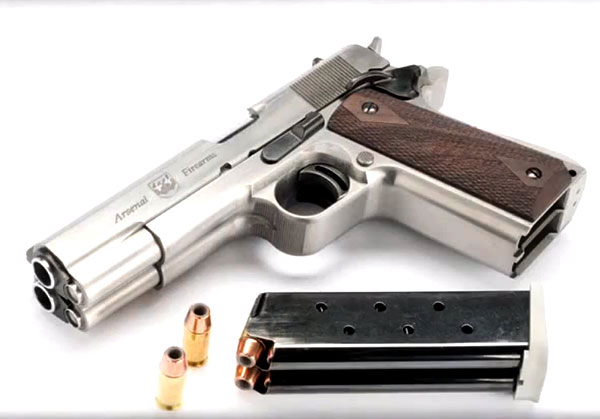 However, I just don’t know how well a gun like this will sell.  Collectors and speculators will jump on this in a heartbeat.  But is there a niche large enough to support regular production of the AF2011-A1?  I don’t think there is, but I’ll happily admit I’m wrong if this gun becomes the next big thing.

The AF2011-A1 has many parts that are custom fabricated.  These include the slide, frame and grip safety.  However, there are many internal parts that are interchangeable with any other Colt 1911-A1 pistol parts.  This makes for slightly easier manufacturing, and also means that AF2011 owners can swap out a lot of parts for a custom gun.

It seems that the new Arsenal Firearms AF2011-A1 pistol is generating a bit of a stir on the intertubes.  Since I posted information on the gun several days ago, that article has been (by far) the most popular page on the site with tens of thousands of views. 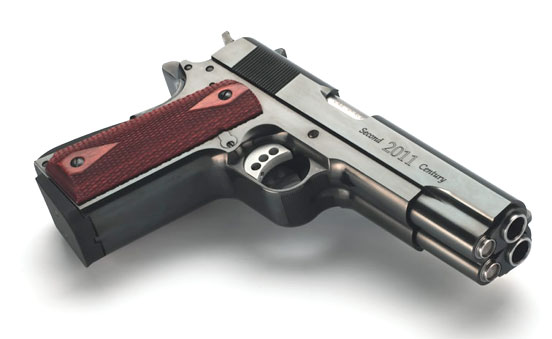 But, AF2011-A1 fever extends beyond our little corner of the cyber-world.  Tech giants like Gizmodo have run stories on the new double-barrel pistol.  Even the [sarcasm]estimable[/sarcasm] MSN reported about the “chilling” new double-barrel handgun with the power to “knock down a bull.”

Yeah…bull is what I was thinking too.

Arsenal Firearms announced that the new AF2011-A1 pistol will be chambered in .38 Super later this year.  Currently, the double-barrel 1911 pistol is available in only .45 ACP.

Arsenal also announced they are testing a “mix-calibre” pistol which would combine .38 Super and .45 ACP into a single pistol.  So, one trigger pull and you send one of each downrange.  Arsenal states this “…will also break new barriers and offer to the self-defense shooter or the hunter an unprecedented opportunity of a high penetrating and powerful stopper at each pull of the trigger.”

Credit to Arsenal Firearms for breaking the mold on this series of firearms.

Arsenal Firearms is designing a new “long slide” double barrel pistol in the AF2011 line.  The new handgun “…will not follow the commemorative “A1” lines of the Second Century edition,” states Arsenal.

The AF2011-A1 created quite a stir earlier this month when they unveiled the pistol.  However, the company is not sitting down, waiting to see how the pistol is welcomed.  Rather, they seem to be running wide open at the R&D department.

Arsenal Firearms at the SHOT Show

Against many people’s expectations, the Arsenal Firearms AF-2011 double barrel 1911 pistols were at the SHOT Show.  I was able to put my hands on them on the show floor and believe they are nothing more than a very limited, very expensive run of handguns that are (at best) merely an attention-getting campaign for the company.

The guns are unwieldy, very heavy and definitely lack any useful purpose.  I’ll be the first to say that you don’t need a purpose to buy a gun (other than “I want it,”) but I just can’t imagine anyone buying one of these for anything more than as a purely speculative investment.

The grip is, of course, way too big around, which causes problems with properly addressing either, much less both, triggers.  Did I mention these things are expensive?

The plain, blued double 1911 carries an MSRP of $4400.  That comes with walnut grips and fixed sights.  If you step up to the satin stainless steel gun with rubber grips and adjustable sights, the retail climbs to $4950.  I just don’t know how many “stocking dealers” there will be at these prices. 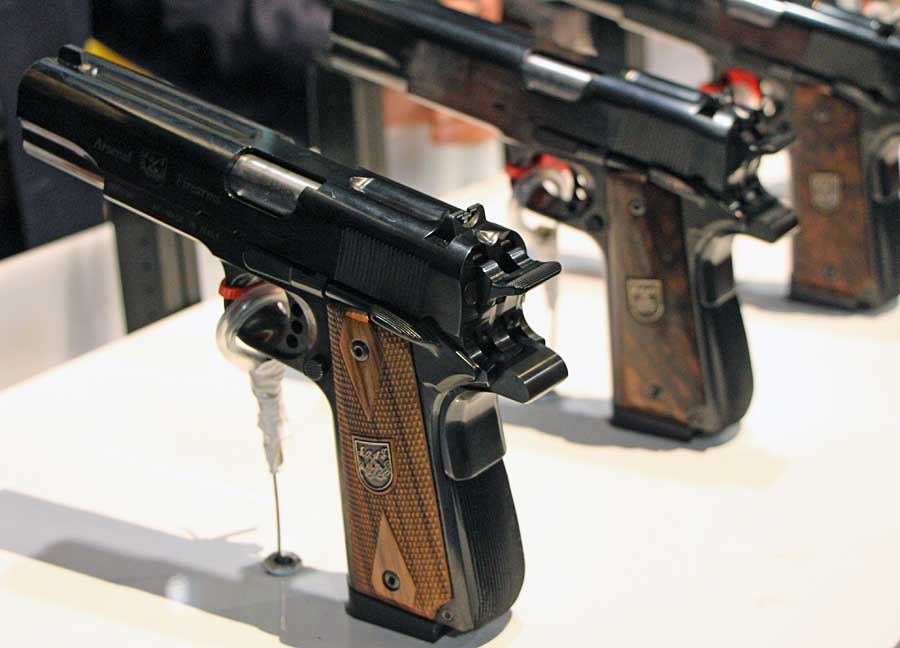 If you want one, you might have to wait, though.  The blued guns are shipping to dealers now, but in what numbers, I don’t know.  Arsenal Firearms states that all of the initial shipments are spoken for (presumably by distributors,) and September will be the earliest guns not already sold show up.  The stainless steel guns won’t ship until fall 2013 anyway.

Well, I guess anyone who is willing to invest that much money into the AF-2011 is also willing to drop $550 for the clear security case with the Arsenal Firearms logo.  Of course, big spenders will go for the Satin Gold edition of the case, which comes in at $1750.

A standard black leather holster sets you back a mere $125, while “The Texan” rig (wide brown belt, brown holster, and loops for individual cartridges) is $410.  A single (or is it technically a double?) brown leather mag pouch is $72.

Presumably, the pistols would bring a great deal of attention, and they have, but if the company planned on capitalizing on the AF-2011 attention to push their other product, the Strike One pistols, they seem to have failed miserably.  If I put together a major (read: expensive) publicity campaign to get noticed, I would make sure that everyone who showed up at my display would get pitched the real money maker.  But, I never saw the Strike One pistols pitched to anyone.

In my opinion, Arsenal Firearms was poorly represented by their floor staff.  I went to their booth on two different days in an attempt to engage the staff in a conversation about their products.  The people I spoke to generally weren’t interested in talking guns, and seemed to have little actual knowledge of the guns anyway.

On the first occasion I stopped by, I tried to introduce myself and was handed a couple of paper flyers in a folder.  They didn’t tell me anything new, and the person I tried to talk to didn’t seem to have a good grasp on the English language.

That’s ok, I figured, I’ll talk to someone else.  Only there was no one else.  Sure, there were other people on the scene, but when I tried to make eye contact with them, they would purposefully move away.  (And for those interested – I HAD bathed that morning.  I was even wearing a black suit, thank you very much.)

The second time I stopped by, I tried several times to get information only to be ignored by a young woman and young man who were arguing whether she as a Brit had more fashion style than he as an Italian.  Frankly, I didn’t think either of them was dressed particularly well, and they were certainly not in what I would call professional attire.  Their self-absorbed, and rather loud, argument certainly wasn’t helping the company sell any guns.

There is undoubtedly a niche in the US for the AF-2011, but Arsenal Firearms could have shown up with two dunces in sweatpants and made a better impression on me.

for real where can i get one and whats the price

Arsenal has not yet begun shipping the pistols, though they insist the guns will ship in the near future. When they do, I will be sure to post an update on the site.

When will the AF2011-A1 be ready for public sale in the United States? What is the cost? Where can I obtain accessories?

These things are COOL beyond belief. And do they really NEED a reason other than that to exist. The project became much more complex than it seemed. Tolerances that worked well on std. 1911s don’t here. Example:: This pistol must fire BOTH cartriges an the same exact time. Bullets must exit in the same nano second, so that the opposing muzzle blasts effect each projectile in identical manner. Both barrels recoil at same time so no undue torque is introduced. It would seem that even the loads would have to be identical so ballistic forces would keep gun in line and bullets on straight flight to target.
Kudos to the development team for a job well done.
As to why I want one… why the hell not,,, nobody else will have one, So I’ll win with the best toy….
As to the price considering it’s more than just sticking two guns together w/ ducktape. I’m thinking it’ll be about as pricy as 4-5 nice 1911’s. Lots for a gun,but cheap for what it is.

Here are the facts of this gun. It was introduced in 2011 and it has been a troublesome couple of years trying to get them imported to the United States from Italy. However they have finally got 158 of these guns (54 Stainless and 104 blued) imported in by EAA (European America Armory). EAA is severing ties with Arsenal Firearms and there are NO predictions as to when and IF any more will be imported. Keep in mind it took 2+ years to get 158 of them, also there is a company trying to import from Israel a double barreled AR-15 and the ATF is currently blocking that import. The argument has been brought up that there is no difference between the 2 guns but with our current political environment, we all know that the ATF cannot allow a double barreled ‘assault weapon’ into the country. Therefore I believe they will have more issues getting any more of the AF2011’s into the country.