Here are a few new guns and other gear I have stumbled across recently.

ARES Defense is now selling an AR upper that allows the user to swap between magazine fed and belt fed. Â This upper is chambered in 5.56 NATO and is compatible with all M4/M16 magazines and M27 linked SAW ammo. Â No word on pricing.

I’m really not clear on what I would ever use this for, but I’m sure some serious engineering went into the development of this kit. Â Made by Ballista Tactical, the Nautilus Rotating Rail gives the shooter a “shift on the fly” capability to rotate rail accessories in 45 degreeÂ increments.

Lewis Machine and Tool Company is making a Pig Man .308 rifle as part of an endorsement deal with Brian Quaca’s television show. Â The show is called “Pig Man: The Series.”

The rifle has a 16″ chrome lined barrel with a 1:10 twist. Â Other features include a 20-round magazine, sling, “tactical” iron sights, SOPMOD Buttstock, two-stage trigger group, and an ambi-selector and ambi-mag release and it comes with a Leupold VX-R HIG 1.25 – 4x20mm FireDot Pig Plex. Â MSRP is $3,488.96.

GWACS Armory acquired all of the rights to and the equipment to make the old Cavalry Arms CAV-15 lowers. Â The CAV-15 lowers are one-piece polymer AR-15 lowers that areÂ inexpensiveÂ and can be had in a variety of colors. 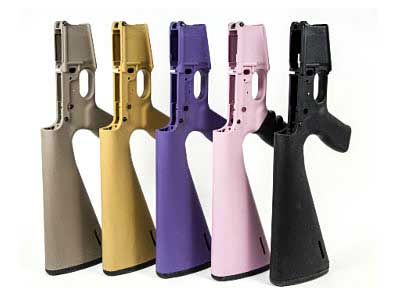 I’m glad to see that someone is finally producing these again. Â I know that there were some mixed reports on the original manufacture of these, but I think this is a great concept and has the potential of putting more of these fun rifles into the hands of more people. Â Besides, my daughter wants a purple AR.

3 replies on “Around the Web: New Guns and Gear”

The rotating rail is creative, and I love that. However, I see it more as a novelty item than a must have one. The idea of having “eight different accessories” to choose from is just silly. Great for zombie movies, but really practical. I’ve heard that 3-gun competitors have set their iron sights on the side rail for close up shots, leaving the holographic sights for longer distance. In that way the rotating rail “might” be useful, but probably would take more time than a simple cant of the rifle.

The LMT “Pig Man” rifle has some really nice features. Unfortunately it has a price tag that reflects that too. It’s a hard pill to swallow for most of us to drop $3500 on just one gun – even as nice as LMT rifles are.

Like the ARES Shrike. The belt-fed option is pretty cool.

I agree with Aaron that this a a pretty creative concept, however might not be super practical in the heat of things. It seems it take a lot of time, as well as hands moving off of the ready, to rotate around. It may end up having some practical uses, though – guess we’ll see.

[…] harder-recoiling rifles. Â There have been other polymer AR lowers made (such as the Cavalry Arms CAV-15 now being made by GWACS Armory), but I’m not aware of anything reliably working with .30 caliber or larger cartridges. […]