In 2005, Smith & Wesson filed a patent application for a “high velocity ammunition system and firearm.”  The abstract stated the bullets fired from this handgun would achieve muzzle velocities in excess of 25,000 fps!

When I started reading the patent application, I expected that the 25,000 fps was a typo.  It just seemed so far outside the realm of possibility to achieve those speeds from any conventional firearm, much less a handgun.

Well, several pages into the application, I find a second reference to “high velocity.”  This time the term is used to describe speeds in excess of 2,500 fps.  This velocity definitely seems much more reasonable.  I’d have to say the first figure listed was a typo.

However, the application is interesting for reasons other than typos.

It seems that S&W was attempting to patent a sabot-type ammunition and matching revolver.  Smith & Wesson cited the inability to develop a revolver design that would reliably shoot and extract bottleneck cased ammunition.  This limited the guns to using straight wall cased ammo.

In an effort to overcome this limitation, S&W came up with the idea of using a disintegrating sabot to achieve similar results to a bottleneck cartridge.

The patent application described a smaller than normal projectile that was partially encased in a sabot.  The sabot was then seated in a straight wall case like used in a .357 Magnum or .44 Magnum cartridge.  When fired, the sabot would move the projectile forward.  The projectile would then engage the rifling and be propelled forward.

The sabot would be made of plastic that would then disintegrate and be expelled out of the bore.

Interestingly, the diagrams included with the patent application showed a square extractor.  S&W obtained a patent for a square revolver extractor in 1993. 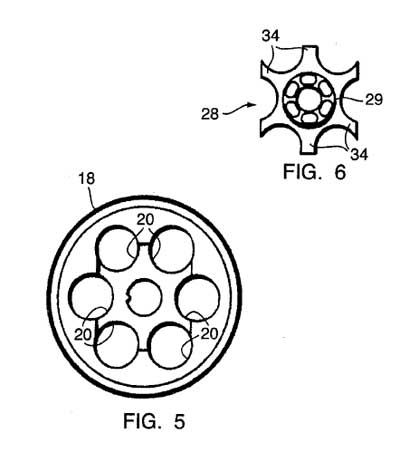 I could not find where a patent was actually issued.  However, I am intrigued by the idea.  I wonder what kind of velocity one could get with a .22 projectile from a .45 Colt case?  Probably not 25,000 fps.

The speed of an explosion is 25k plus it’s possible, I’ve designed a prototype, but the average solider can not see past 600 yds to recognize and enemy, and the recoils would be pretty great depending on the projectile, this concept is better for anti-material, I imagined what one solider with 3k ammo could do, try a penetrive capiblity equaling 10in of armor plate, or a bullet traveling 10 plus miles, I stopped creation, but am interested in replacement of the m2 or help weapons, but who knows…

“You keep using that “k”, I do not think it means what you think it means”
Kilo (from the Greek χίλιοι, literally a thousand) is a decimal unit prefix in the metric system denoting multiplication by one thousand.
Your “prototype” “can kill out to 1200k”… what? Yards? Twelve hundred thousand yards is a lo-o-o-o-ong way, a little over 682 miles. Even 1200k feet is almost 230 miles. Can you hit anything at that range? Like Montana, maybe?
And the sabot will do “little damage” because … ?
Because it’s going half the speed of light? Yup, “The faster things go the less damage they do” – Fudd’s First Law of Motion..
That’s why I’ve given up using a gun to hunt deer and I just throw my bullets by hand.

Every time I try reading his comment it makes less sense. And wtf is pentrive capibilty

And I’m assuming he doesn’t realize that a sabot is just a outer casing to create and air tight seal for the projectile… smh I can’t stand when people talk out their asses like this. Thank God he stopped production on this lol

I’m happy to see that the first reply was exactly what i was thinking. His lack of ability to describe the capabilities of a round in general instantly lost him any credibility he might have had. Then to claim that because “the speed of an explosion is 25k makes it possible” clearly he has 0 understanding of physics. Let’s just say this is true. To make a projectile travel at the same speed as thus said “explosion” you would have to create a vacuum within the barrel so that the projectile wouldn’t instantly run into an equal amount of air pressure on it’s way out. I forget the exact formula but it basically says that the faster and object is traveling inside or out of a barrel and as long as we are on earth the pressure it is facing and creating in front of it grows exponentially making it impossible to push a bullet to certain speeds. Hence why rail guns are the only way to really make a projectile travel at these speeds. This guy reminds me of a friend we hung around with thay claimed he had inventions that broke the laws of physics and actually got away with his bs to the uneducated guys in the neighborhood. But for example he claimed he designed a jet pack that could operate for hours…..nuff said. Luke stop pretending bud.