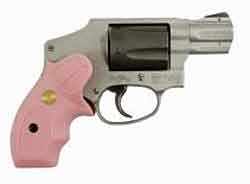 The Clip Grip is a polymer revolver grip with a portion that sticks out to hook onto your belt or waistband.  This allows the shooter to carry the gun without using a holster.  This new model is in pink and will fit Smith & Wesson J-frame revolvers with a round butt.

While I don’t care much for pink gun parts, I have to admit that pink stocks are less likely to get you “made” should your shirt ride up and expose them briefly.

For less than $30, you can get a black leather belt that is reinforced for concealed carry duty.  DeSantis originally designed this belt as garrison belt for NYPD, but discovered it worked extremely well as a CCW belt also.  [Ed. note:  A garrison belt is used by police officers as a normal belt, that the heavier duty belt then attaches to.  The garrison belt runs through the pant loops and is not visible when a duty belt is worn.]

The DeSantis Pocket Shot is a leather pocket holster that allows the user to shoot the gun without removing it from the scabbard.  The new model fits a Ruger LCP with a Crimson Trace LG-431 Laserguard attached.  The Laserguard mounts on the exterior of the LCP, and requires specially fit holsters.