The recently announced SIG SB15 brace is now a standard option on several of the company’s pistols.  The new pistols include the P516 with the 7.5″ and 10″ barrels, the SIG P556 SWAT with a 10″ barrel and the P556 Classic.

The SB15 brace is a forearm brace that looks like a very short buttstock with adjustable straps that affix the unit to the shooter’s forearm.  The idea is to provide greater control and stability when shooting one of these large pistols. 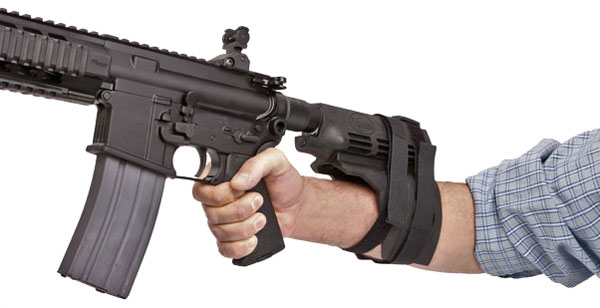 SIG Sauer announced the SB15 earlier this year, and these are the first pistols on which SIG is offering the device as a standard option.  The pistols are similar to the rifle versions of the gun, but without a buttstock and with shorter barrels.  Magazines and other accessories will interchange between the guns.

The brace was developed by a US military veteran.  Word is he developed it to assist injured combat vets who might not be able to handle a full size rifle due to injuries sustained in service.  SIG donates a portion of the SB15 sales to the Honored American Veterans Afield (HAVA) non-profit. HAVA helps wounded vets get back into the field to enjoy hunting and other shooting sports. 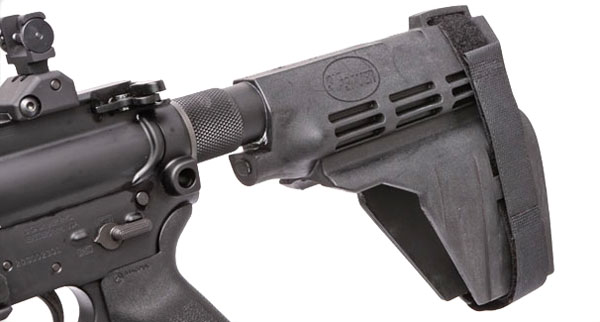 HAVA was created by members of the shooting community in 2007, and is supported by firearms companies including Smith & Wesson, Glock, Hornady, Mossberg, Barrett, Ruger, XS Sights and more.

Clearly this pistol brace isn’t for everyone.  However if you have an AR-style pistol with a buffer tube, the SB15 might be a good option to help you improve control and accuracy with the weapon.  For someone who has been injured or disabled, this accessory might be just what they need to enjoy the shooting sports.

I like the open bottom design that allows the “stock” to fit around the forearm to provide greater wrist control, but I hate the velcro straps. Those straps may be all good and fine on the target range, but if you use these pistols as a self-defense weapon you begin to see drawbacks to the velcro.

First – In a dynamic self-defense situation the shooter is unlikely to have time to strap the velcro down. Not that velcro is difficult, but it is one more step in a very stressful situation. A shooter should be able to grab and gun, because often in those situations that is all the time they will have to defend themselves.

Second – If that weapon runs dry, or has a critical malfunction, the shooter is left with a 10-pound weight, awkwardly strapped to their arm. Attempting to transition to another weapon becomes almost impossible.

I could use that as a shoulder stock very easily – be a cheap and easy way to get into a SBR. I like it!

Good point Aaron; maybe they should have elastic straps. In the meantime you could pre-adjust the straps for a relatively tight fit while still allowing you to slip it on.