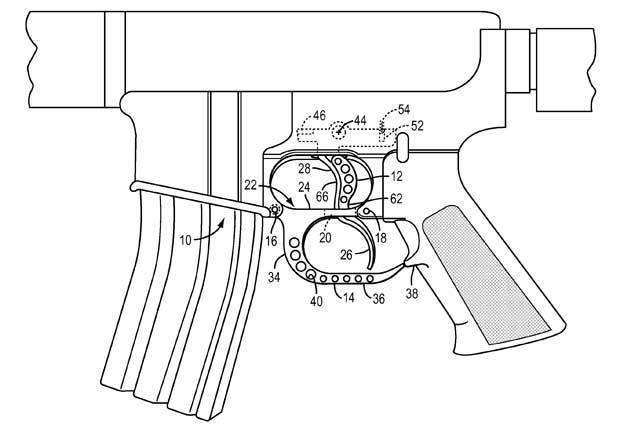 The D-TR is a drop-in trigger system for the AR-15 platform that introduces a second trigger guard with a double-hump, really long trigger that can be pressed from both the standard trigger position and the newly added position.  This essentially lets a shooter slap the triggers in a one-two motion with the pointer and index fingers to throw a lot of rounds downrange in a manner consistent with paintball players.

The company touts the lower trigger as improving accuracy due to it’s greater leverage and lower felt trigger pull.  Of course the other side of that coin is that the shooter is either making a precision shot with a non-trigger finger or the shooter is dropping his or hand farther down the pistol grip and losing control due to less grasp on the gun.  Watch the shooters’ grips in this video:

Contrary to the statement made at 1:55 in the video, I do not think “everyone’s rifle should be outfitted with [a D-TR double trigger].”

Something to consider is that the lower (extra) trigger guard may not mate up with the pistol grip you have installed.  For example, every picture I have seen of a D-TR on a gun with a Magpul MOE grip shows a not insignificant gap between the trigger guard and the grip.  I have visions of stuff getting hung up on it or something making its way into the space and causing a negligent discharge.  So, make sure your gear will work with the D-TR if you want one.

Look, if you want something neat to play with, something that will let you shoot a lot of rounds quickly from a semi-automatic rifle, then give the D-TR a look.  The drop-in module is $249 plus $7.50 shipping.  Get one with a needle bearing for an even faster trigger pull for $275 plus shipping.  For shooting a lot of rounds quickly, I like this better than the Slide Fire stocks, and the D-TR is cheaper to boot.

As far as being a precision trigger, I have serious doubts.  Mechanically, the trigger might be great.  However, the shooter has to adapt to new methods of shooting to properly utilize the lower portion of the trigger for maximum precision.  For about the same money, a shooter can pick up a Geissele Hi-Speed National Match trigger and maintain the same shooting grip he or she is familiar with.

I don’t know what to say about this. I guess I’m not “operator” enough.

Wow. Seriously…wow. Just when I had figured no one could come out with a gadget for the AR that would surprise me, we get this trigger to help people shoot more ammo even faster just for the sake of shooting more ammo.

This has to be a hoax…