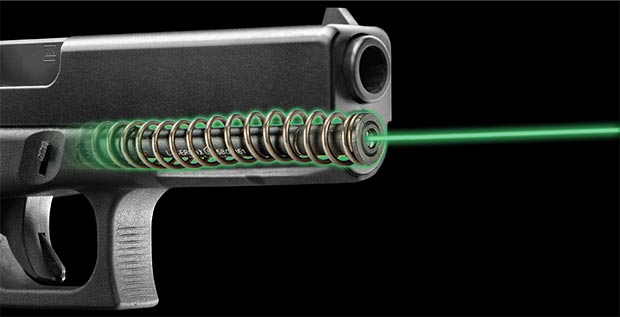 LaserMax officially introduced the green guide rod laser for Glock pistols on Friday. Â The new guide rods uses a green laser for aiming instead of the traditional red laser the company used in the past. Â LaserMax hinted to this announcement recently on the company’s website.

The new lasers are completely contained in a replacement guide rod assembly. Â There are no external accessories attached to the gun. Â The obvious benefit is that a Glock can be outfitted with one of these LaserMax devices and still fit in normal holsters.

Having the green laser contained in the guide rod allows for an aiming device that is more closely aligned to the bore. Â While that does not improve the accuracy of the gun per se, it does reduce the amount of variation or error introduced by parallax. Â For most shooters, this may not make a significant difference. Â However, for someone relying on the laser for precise shot placement, it can reduce the cone of error.

a modified slide lock lever serves as LaserMaxâ€™s signature Controlled Activation switch, allowing the shooter to operate from concealment without risking a potentially dangerous reveal of his or her position.

The new guide rod laser units are expected to ship in mid September and will carry an MSRP of $449. Â I would expect that the street price will be less than $400.

Most models of Glock pistols will have a green laser guide rod available, including the new Gen 4 Glock pistols. Â Noticeably absent, however, are the subcompact Glock pistols such as the 26 and 27. 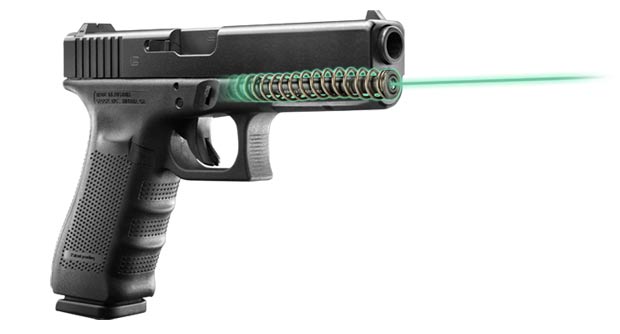 Using the Native Green technology, LaserMax has the potential of making more reliable, more efficient green lasers. Â Time will tell if these claims will prove true in the hands of consumers, but the advancement of green laser technology is exciting.

One of the problems I discovered with green lasers is their sensitivity to temperature extremes. Â When testing the Streamlight TLR-2 G, I found I was able to greatly reduce the capabilities of the laser by sticking it in the freezer. Â While no one is storing a gun in the freezer, for someone spending a lot of time outdoors in the winter, this could be a concern.

LaserMax claims a reduction of temperature sensitivity, but also refers to “less heat sensitivity.” Â This suggests to me that the LaserMax green guide rod laser may also be subject to reduced performance in sub-freezing temperatures.

How come no green laser for the Glock 27?

That’s an excellent question, and one that I’ve forwarded to LaserMax for an official response. Thanks for reading and commenting.

Unfortunately, I’ve not heard back from LaserMax yet. I’ll let you know if they send me a response.