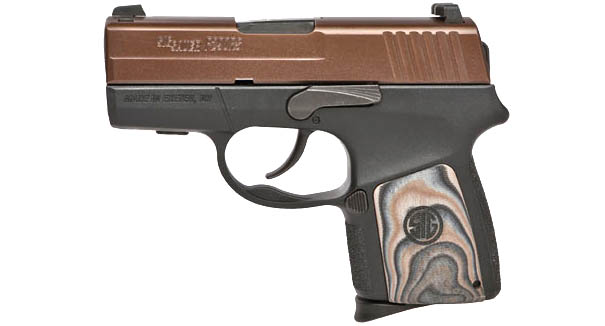 SIG Sauer announced a new version of the P290 pistol. Â The SIG P290 ORB is functionally identical to the P290 ES I previously reviewed, but it has an oil rubbed bronze coated slide. Â This is the same finish used on the popular SIG 1911 Spartan pistol that we saw at this year’s SHOT Show.

The new pistols also use G-10 grip panels similar to the ones on the ES model. Â However, the new grip panels have a color pattern that matches the bronze color of the slide better than the original ES grips.

If you are not familiar with the SIG P290 series of pistols, they are polymer-framed, subcompact handguns. Â The P290 series is hammer-fired, not striker-fired, and has a double-action only trigger. Â The guns are chambered in 9mm. 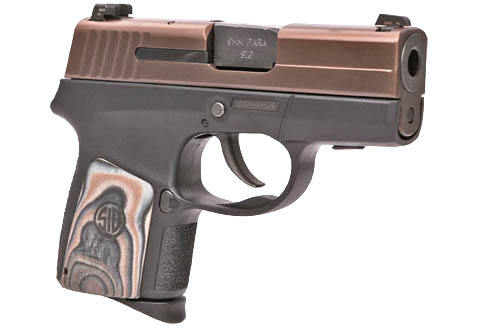 In my evaluation of the P290, I found it to be very reliable and easy to shoot. Â The trigger was longer than I like, but it did not prevent me from accurate shooting. Â I fed +P and +P+ ammo through the gun without any problems. Â Unlike other subcompact pistols, this gun has very good sights.

I don’t know how durable the oil rubbed bronze finish is, but since SIG Sauer has used it on other guns in the past, I can guess that it has been holding up fine.

The P290 ORB comes with a six-round mag and an eight-round extended magazine. Â These pistols also come with a polymer paddle holster. Â The MSRP on the gun is $613, so I would expect street pricing of $550 – $575.

Dollars to donuts, I’d bet that the finish is Cerakote.

I’ve only got about 500 rounds through my Spartan, no wear so far. The oil rub bronze finish is just their standard Nitron coating colored differently. It’ll wear just like any other Sig pistol.