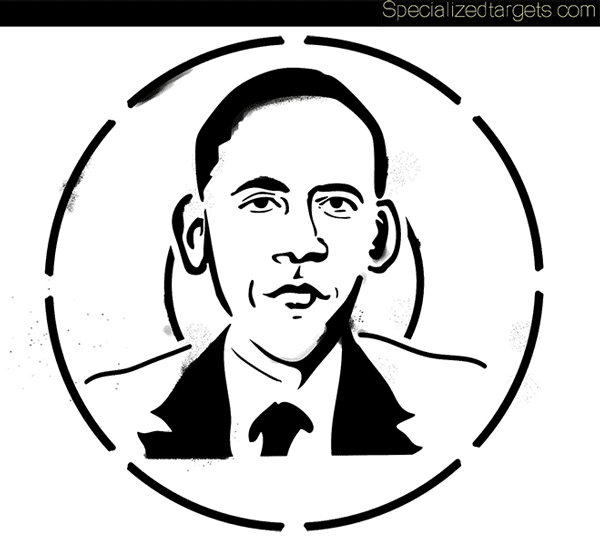 This is not a political website. Â While I happen to think the golfer-in-chief is just about the worst person possible to hold the office, I didn’t much care for the prior three office holders either. Â But, I would not want to see violence befall President Obama or any other elected official. Â That’s just one of the reasons why I think these new targets are in poor taste.

The folks at SpecializedTargets.com are now selling an aluminum stencil so you can spray paint an image of the president onto a target and spend your day shooting it. Â The stencils are $20 each and are supposed to be “anatomically correct.” Â I’ll take their word for it on that one.

While I would support the right of the manufacturers of the stencil to make and sell offensive products, I can’t say that I support their actions. Â Just because someone can do something doesn’t mean they should should do it. Â Sounds like a lesson I have had to teach my children in the past.

With all of the crazy leftists this president has surrounded himself with, and with the history of violence that leftists have in assassinations and attempts, I fear for the safety of our elected leaders. Â I don’t like the man occupying the White House, but I much prefer peaceful transfers of power as opposed to third world juntas. Â Your mileage may vary.

I understand your distaste at the target but I love the idea, if it were economically feasible I’d like to see these made for every civil servant, down to the local dog catcher. Remind them that they work for productive people who pay taxes. Remind them that “When democracy turns to tyranny the armed citizen still gets to vote.”

They have overstepped their bounds, whether its constitutional limits or like bloomberg in NYC and limits of good taste. And I don’t really think they see the ballot box much anymore as a restraint on their power.

This is literally the last soapbox before the ammo box. I think it is good to put that idea in their heads.

That is what the second amendment is about, correct?

Could not have said it better myself!!!

The president, no matter who it is, is not our “leader”. He is our employee. Elected by the American people to carry out our will as expressed through the laws passed by the Congress.

I agree that they are in poor taste (not to mention that owning one might bring a rather unpleasant visit from the Secret Service), but no more heinous than those so-called “No More Hesitation” targets that portray pregnant women, women with kids in hand, grandmas and children holding guns. While it’s true that law enforcement (and legal concealed carriers who get training in defensive shooting techniques) center on focusing on a potential threat’s hands to determine if a weapon is present, the people portrayed in these targets are designed to desensitize cops against shooting such people.

While the former is a poor joke, given the ongoing militarization of police departments the latter can have really bad consequences.

Although the debate on “militarization” of police departments is a heated one currently, the use of realistic targets should not be. I’m unaware of any psychological data that suggests that simply using images of women, grandmas, children, etc. with guns or other weapons desensititze police officers to the point they shoot those people without thought.

However, there are numerous examples of police officers failing to fire their weapons when confronted with deadly force situations, because the training on the range centered around bull’s eye or generic silhouette targets that merely displayed marksmanship of the officer and not the critical thinking necessary for an officer to decide shoot/no-shoot situations. Sometimes that results in the officer being wounded or killed, which then leaves innocent people in harm’s way.

It is unfortunate that in the last 20-30 years we have seen more deadly encounters between police and “normal-looking” people, but that is the reality. Simply training police to shoot at “thugs” with scars, tattoos, and ski masks does not adequately prepare officers to properly evaluate the situation they may face.

The key point is that those images had the person brandishing a firearm – a deadly force encounter. The best way to use those targets is to have the same or similar targets next to each other, but only some have the firearm displayed. That requires the officer to evaluate each target for what they are – shoot or no-shoot.

Last year 27 cops died from gunfire. So far this year cops have shot 500 innocent citizens. All too often it is the srmed government employees brandishing weapons. It is time to start training them to leave thier pistols holstered. “Officer safety” needs to be the LAST cocern of government employees.