FNH USA, a division of FN Herstal of Belgium, is no stranger to high quality firearms. They have also produced some of the finest military weapons and weapons systems that are currently on the front lines of todayâ€™s battle for freedom with dozens of countries, including the United States.

For years FNH has impressed with the FN SCAR, FN TSR precision rifles, and FN series of pistols. The FN P90 and FN FiveSeveN pistol were incredible designs and technological advancements when released. So when FNH announced their jump into the AR-15 market, there was quite a stir, as one could imagine.

FN even had a lot of advertising at the SHOT Show this year. The FN15 was displayed on a huge wall banner, and there were mentions in other literature as well. When I finally made it to the FNH booth I by-passed the more familiar lines of rifles and handguns and went right to the â€œnewâ€ FN15 Series stand. 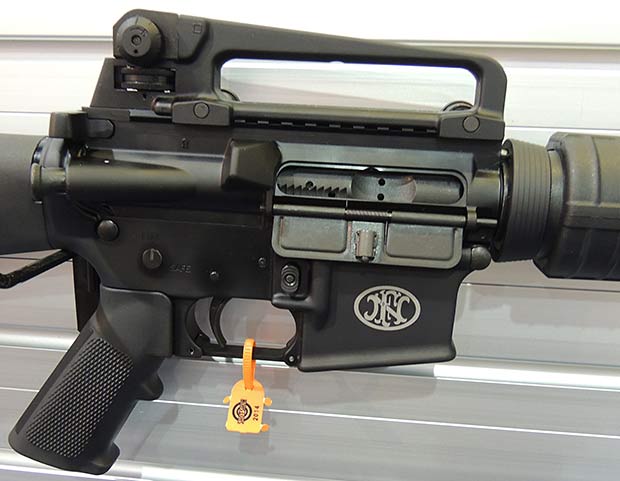 Uh, O.K., is this some kind of joke? Surely this cannot be the only options in the new FN15 Series? Unfortunately, that was my initial and lingering opinion of what I saw. FNH is more than a little late to the AR-15 market. Thatâ€™s been fine for them because of their other very popular lines of firearms. So most, like myself, were expecting a much more impressive launch than what FNH had on display.

The â€œnewâ€ FN15 Series of rifles is anything but new. The only claim to â€œnewâ€ is that they are new to FNH production. The FN15 rifles probably would have been a hugely popular product if they had been released, say, 10 years ago! At that time the American market, the largest in the world, was exploding in growth with the expiration of the â€œAssaultâ€ Weapons Ban.

Now, however, the FN15 Series is about as basic an AR-15 platform as you can get. About the only, advanced features are the basic collapsible stock, and the detachable carry handle exposing a Picatinny rail on the upper receiver. Yeah, thatâ€™s about it!

I have no doubt that the FN15 Series rifles will be high quality firearms that meet the stringent standards from a world firearms leader. Obviously the FN15 Series can be upgraded with after-market accessories. I just donâ€™t think FNH can get a pass for introducing such basic models in a saturated market.

FNH could have made such a more powerful jump into the AR-15 market with superior match-grade barrels, stocks, hand guards, grips, receiver and bolt materials, compensators, match 2-stage triggers, or at least special combination packages with some of the most popular accessory manufacturers.

Unfortunately, the FN15 Series may be short lived, at least on the civilian side of the market. Perhaps, the civilian market was never really their motive in the first place. FNH has a long and successful history making military weapons.

Recent U.S. Government decisions to stay with the M4/M16 platform for the immediate future may have led FNH to enter the market in hopes of winning a contract for perhaps tens of thousands of rifles. FNH submitted the SCAR rifle for consideration before, but only in very limited circumstances (mostly Special Forces), has the U.S. Armed Forces accepted its use.

Time will tell, but for now the â€œnewâ€ FN-15 Series gets a big yawn from me.

I’m actually interested in the FN15 Rifle. I always preferred the 20″ variant of the AR15/M16 pattern rifle. I carried and qualified with M16A1 and’A2; they where the rifle of my youth.

When using gas impingement, they cycle better than the M4.

Seriously? There are dozens of companies offering myriads of more customized options all with certainly tricked out upgrades of every flavor. Here is the new mil contractor presenting a premium option for a classic frame to make the build that is uniquely yours. I give FN a thumbs up for breaking open in a true classic style rather than start with a bells & whistle campaign that is the popular norm. Dpms type companies have neat looking offerings but their quality is …well. FN is a precision oriented manufacturer & when you buy these first run FN workhorses your getting a piece of history.

I am going to pick up one of these as soon as I can. Seems like a great deal to me!

[…] this pistol, FN America is using a polymer frame with a FDE color. The slide is then finishedÂ using a PVD process. The […]