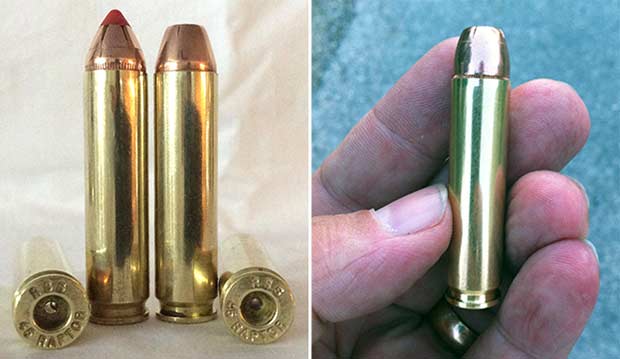 Imagine a .460 S&W Magnum in a semi-automatic rifle. Â Now take a look at the very real 45 RAPTOR.

The new cartridge is essentially a rimless .460 S&W Magnum load. Â It offers serious thump for hunting hogs and other game, while fitting a standard AR-10 rifle. Â The rimless design matches the specifications of the .308 Win, which means a new barrel and slight magazine modification is all that is needed to run the cartridge.

The genius behind this new cartridge is Arne Brennan. Â Brennan’s work with long range cartridges in competition shootingÂ helped introduce the 6.5 GrendelÂ to the shooting world. Â Brennan stated the cartridge works extremely well in rifles with a 16″ barrel. Â According to Brennan, testing had been done with other barrel lengths, but the longer barrels did not offer a significant performance increase when considering the additional length and weight in a gun that would likely be used in brush for hunting. 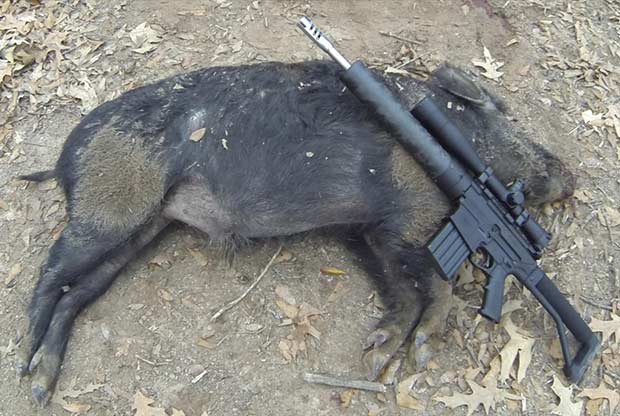 Velocity and energy levels from the cartridge are fairly impressive. Â From a 16″ barrel, aÂ 300 grain Hornady XTP Mag bulletÂ is good for up to 2300 fps and more than 3400 ft-lbs of energy. Â A lighter,Â 160 grain Barnes TAC-XP bulletÂ can be pushed to 3000 fps.

The 45 RAPTOR compares favorably to other big bore, semi-auto cartridges:

measurements at the muzzle from 16" barrel with 300 grain bullets; data provided by 45raptor.com

One of the features of the new cartridge is the ability to put rounds into a 6″ circle from point blank to 200 yards with no hold over.

Handloading these cartridges will be very straightforward using a .308 Win shellholder and .460 S&W Magnum dies. Â Load data, powders and bullets developed for the .460 Magnum will all work for the 45 RAPTOR without modification. Â Open your load book and build up your loads as normal using the .460 S&W Magnum recipes. 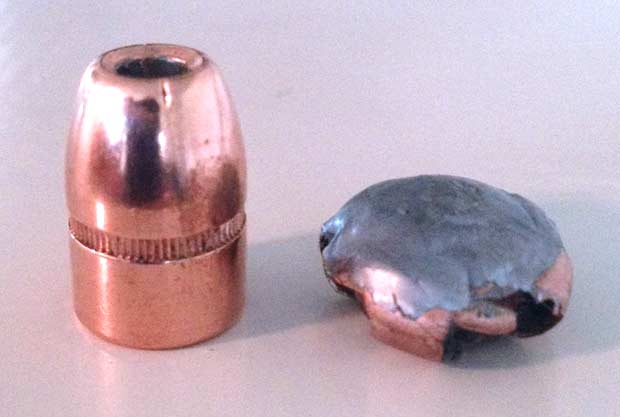 Brennan stated that the RAPTOR name will be trademarked, but he will not charge royalties to any manufacturer wishing to load ammo or make parts for the guns. Â (More information on thisÂ can be found here.) Â That means shooters will not be married to a single source of ammo or parts. Â In fact, other than the brass, all of the ammunition components and tools should be relatively easy to come by at local shops or online.

Initially, brass will probably be limited to a single source, but Brennan has already givenÂ Starline Brass permission to sell the brass direct and through retailers such as MidwayUSA. Â MSRP on brass will be $39.50/bag of 50.

Very little is needed to convert an AR-10 to shoot the 45 RAPTOR. Â The rifle needs a new barrel with a special extension, and magazines will need to be modified. Â According to Brennan, some of the big bore cartridges already on the market have difficulties in feeding hollowpoint ammunition. Â To prevent these problems in the RAPTOR, Brennan developed a different approach to chambering a round.

For the 45 RAPTOR, the feed ramp has been moved from the barrel extension to the magazine. Â Brennan states this allows the cartridges to feed hollowpoint ammunition flawlessly.

Magazine followers do need to be modified for the new cartridge. Â Essentially, the followers are shortened and an insert is placed in the forward portion of the magazine. Â The insert prevents the ammo from riding forward in the magazine and incorporates the feed ramp.

Standard AR-10 magazines from Lancer, ProMag and DPMS can be used with the 45 RAPTOR cartridge, and they maintain the same capacity: 20-rounds will still hold 20-rounds. Â Curved magazines will not work with the required modification.

Expect to pay about $300 for aÂ Liberty BarrelsÂ stainless steel barrel and extension designed for the RAPTOR. Â New 20-round magazines will also be available from Raptor Shooting Systems for $39 each.

Brennan anticipates rifles production will begin in late May. Â He has more than 100,000 pieces of brass on hand, and another 500,000 will be delivered during the next 9-12 months.

If you have an interest in learning more about the cartridge or rifles, visit 45RAPTOR.com.

I was wondering why it’s on an ar10 platform, and the 450 you show is well off what im gettin l have 2200 fps with Hornady ammo and much more with my own reloads.

Regarding the above velocities, those are for a 300 grain bullet. I believe Hornady only loads a 250 grain bullet in their 450 Bushmaster cartridge. With a 240 grain Hornady XTP MAG bullet, the 45 RAPTOR makes for 2,650 fps – quite a bit more than the Hornady ammo you mentioned. Of course, those are the initial loads worked up by Brennan. Once people start loading their own, I would expect handloaders to work up even hotter loads – just like people do with the 450.

[…] Gunsholstersandgear.com points out, these cartridges can be handloaded using a .308 Win shellholder and .460 S&W […]