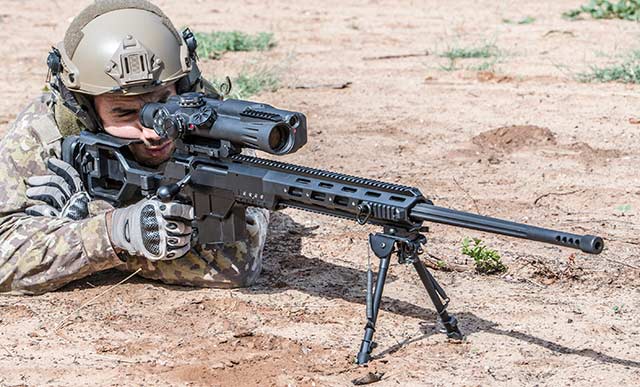 Israel Weapon Industries (IWI) announced the production of a new sniper rifle called the DAN.  The DAN rifle is the company’s first bolt-action gun and was developed with the Israel Defense Forces (IDF).  It is chambered in .338 Lapua Magnum.

The rifle has a variety of features that have become commonplace on military-grade sniper rifle, including:

According to IWI, the rifle has been through extreme endurance testing in all kinds of environmental conditions.  The company states the rifle offer “exceptional accuracy” up to 1,200 meters.

The guns will be on display at Eurosatory 2014 in Paris next week.

IWI manufactures another sniper rifle, the Galil Sniper SA.  Unlike the DAN, the Galil is a semi-automatic rifle chambered for the 7.62 NATO cartridge.

Currently, there is no word on any intentions to import the DAN rifle into the United States.  Given the success of the TAVOR rifles in the US market, I would expect IWI would consider exporting to the states if there was enough interest.

Make sure you also read my IWI X95 review.

This is a very interesting addition to the sniper rifle arena. The .338 has proven itself to be a masterful cartridge at long range accuracy, with very flat trajectories. The free float barrel is a standard now for superior accuracy. There is a lot of energy with the bullet as well.

This rifle also incorporates many of the latest advancements in rifle technology including a fully adjustable stock, Picatinny rail for scope mounting, and modular fore stock. The use of aluminum reduces weight, and a detachable box magazine allows for higher round capacity and quicker reloading.