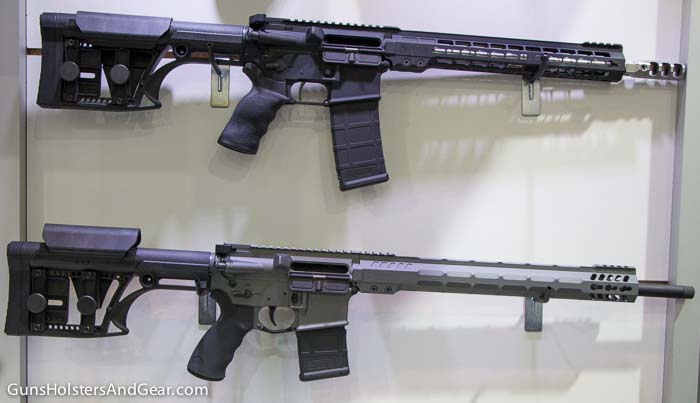 ArmaLite is introducing an all new M-15 line of rifles and pistols for 2015 according to the representatives I met at the recent NASGW Show. The new guns cover everything from tactical to competition with plenty of fun stuff in between.

While the guns are in the AR-style, these are a significant departure from the company’s traditional line up. Frankly, it looks like a major pivot on the part of ArmaLite. Let’s go over seven of the new guns right now…

Previously, ArmaLite sold a traditional pistol called the AR-24. These handguns were made in Turkey by Sarsilmaz, a well respected gun manufacturer in that area of the world. While the guns were generally considered reliable and accurate, they simply did not catch on and were eventually dropped from the ArmaLite catalog.

For 2015, the company is bringing back pistols – but not the typical handgun. The new handguns are AR-based pistols, which makes infinitely more sense to me considering we are talking about ArmaLite. You know, the company that hired Eugene Stoner in 1954 as its chief engineer and developed the AR-10 and AR-15 rifles.

Both M-15 pistols will ship with a SB Tactical SB15 arm brace installed. These are the same arm braces sold under license by SIG SAUER that have become extremely popular.Â The arm bracesÂ will be attached to the guns with a Law Tactical Gen 3 folding stock adapter. These will allow the arm brace to swing to the side of the gun for compact storage or transport. In an emergency, the guns can fire one time with the arm brace folded. After that shot, the brace has to be opened and the bolt operated via the charging handle to get back in the fight.

The barrels are double lapped, chrome lined cro-moly steel with a 1:7″ twist. KeyMod hand guards are standard on both of these pistols. Barrels are topped with an OSS flash suppressor. The 6″ gun will weigh 6 pounds while the longer pistol will weigh 7 pounds, 2 ounces.

ArmaLite includes a pair of Magpul back up sights and a single 20-round Magpul magazine. The charging handle is the ambidextrous Raptor fromÂ Rainier Arms.

In the new line up, ArmaLite has what seems to be three basic rifles with variations within each category. They are the Tactical, Versatile Sporting Rifle and 3-Gun. The names should be a pretty good clue as to howÂ each is set up. Let’s take a closer look at each.

The longer of the two guns uses a .223 Wylde chamber, which is not frequently seen in a rifle labeled as tactical. The .223 Wylde will shoot both .223 Rem and 5.56 NATO cartridges safely. Many shooters state the Wylde offers accuracy improvements over the 5.56 NATO chamber.

Both guns ship with Magpul sights, MOE pistol grip and a 30-round PMag. A 15″ KeyMod hand guard is standard on both rifles, as is the Magpul STR stock.

The Versatile Sporting Rifle, or VSR, shares a few features with the 18″ Tactical rifle but makes a few changes including aÂ different stock and hand guard. This model uses a .223 Wylde chamber with an 18″ stainless steel barrel using a 1:8″ twist.Â The barrel is threaded, but does not ship with any muzzle device. It does come with a threat protector.

The stock is a Luth-AR MBA-1, a modular unit that has an adjustable cheek riser and adjustable length butt plate. The cheek riser is reversible for peopleÂ shooting off of the left shoulder. Sights do not ship with this gun, though the Picatinny rail allows for the easy addition of irons or glass.

ArmaLite is introducing a pair of M-15 guns designed for 3-Gun competitions. One is a carbine with a 13.5″ barrel, while the second is a rifle with an 18″ barrel. The shorter gun has a permanently attached brake to make 16″. The same brake is used on the 18″ rifle, but it is removable. According to the ArmaLite rep I spoke with, the brakes are tunable and are being made in-house.

Both guns use a .223 Wylde chamber with a 1:8″ twist. Barrels are stainless steel. These guns use the same Luth-AR stock that is used on the VSR above. Like the VSR, the guns do not ship with sights. 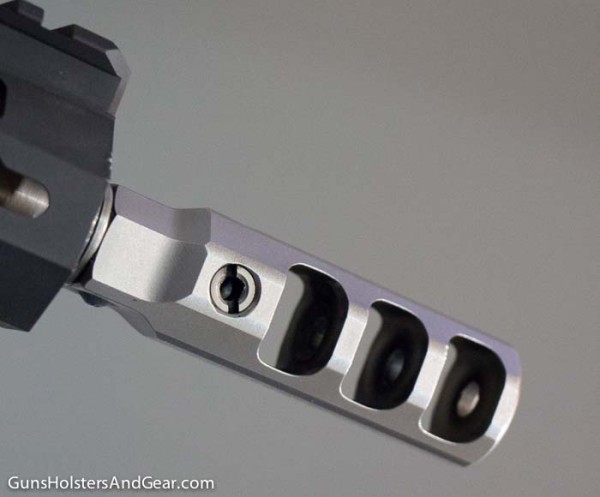 Timney single stage triggers set to 3 lbs are standard on both of these guns. Like the other M-15 pistols and rifles, these guns use an ambidextrous safety selector and the Raptor charging handle. Both guns use a light weight KeyMod hand guard.

ArmaLite is currently spooling up production on these guns. The first guns were expected to ship to distributors by October 31. As manufacturing comes online, more of the above models will be added. Currently, ArmaLite aims to have all of the gun mentioned in this article shipping by the end of March 2015.

At this time, I do not have an MSRP for the rifles.

As I’m sure you know, ArmaLite is the company that hired Stoner in name only.

Uh, ok… for those of use casual readers who don’t know the intimate details of ES’s life, what do you mean “in name only?”

He’s saying that the Armalite of today used to be Eagle Arms. The original Armalite went out of business.

I like the look of these. ArmaLite definitely needed to refresh the line since everyone in the industry (even S&W and Ruger!) are making ARs now.

Happy to see Armalite continue to use the 223 Wylde specs for the precision guns. I don’t know about the tunable brake, though.