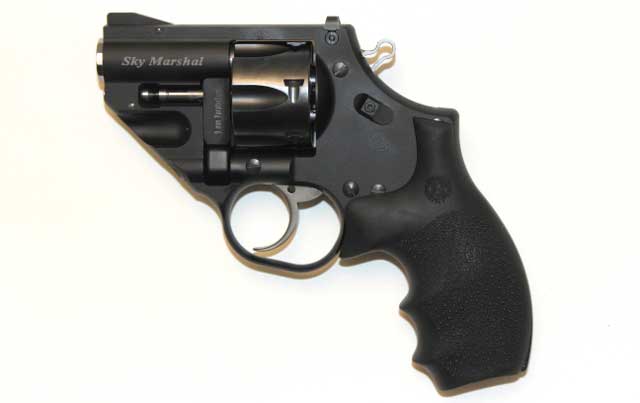 Korth will be showing the Sky Marshal revolver at the 2015 SHOT Show. This six-shot wheelgun is chambered in 9mm and does not need to use moon clips to chamber or extract correctly.

Here’s what we know so far…

The Korth Sky Marshal is a revolver chambered for the “rimless” 9mm cartridge. Typically, the 9mm is found in semi-automatic handguns. However, a number of manufacturers have made 9mm revolvers in the past, such as the Taurus 905 that I reviewed in this article.

Frequently, a manufacturer will use thin pieces of metal that the rimless 9mm will clip into. These clips may be full moon or half moon. The full moon are circular and hold a full load of ammunition – typically five or six rounds. A half moon clip is half the size and capacity of the full moon clip.

Over the years, a few companies have introduced clipless revolvers for rimless ammunition. Smith & Wesson pioneered this in the early 1980’s. To my knowledge, besides Korth, only Charter Arms currently makes a revolver designed for rimless cartridges that doesn’t use clips.

The Sky Marshal has a number of interesting characteristics beyond the 9mm use. One of the most obvious is the addition of a Picatinny rail along the right side of the barrel. Many people like to add a white light to their defensive handguns, and this would give buyers an easy way to do so.

The company plans on offering a laser aiming module to go with the revolver. Korth is a German company and lists the laser as “for official use only.” It is not known if the laser unit will be sold to citizens in the US. 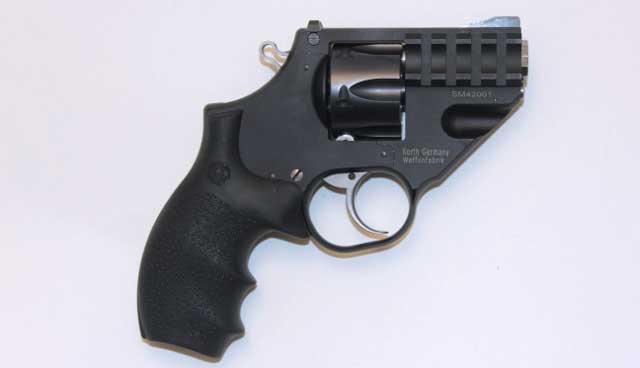 The Sky Marshal is a relatively compact revolver with a 2″ barrel and full underlug. It does not appear to be a replacement for a J-frame revolver, but might serve as a nice alternative to a Model 19 with a 2″ barrel.

The gun weighs 19.75 ounces unloaded. All things considered, that seems like a pretty reasonable weight. The 9mm is a high pressure round and can feel a little like a .357 Magnum load when using +P or +P+ ammo. Going too light can cause problems like bullet jump and can make shooting the gun unpleasant.

Double action and single action shooting are possible with this Korth revolver. The hammer is skeletonized.

I’ve always had a thing for revolvers – especially ones that are a bit out of the box. I look forward to seeing this gun at the SHOT Show. I’ll make sure I get additional information and post it here on the site.

Prior to the SHOT Show, I attended the Industry Day at the Range event in Boulder City, NV. During this pre-SHOT event, I had a chance to visit the Korth display and shoot one of the new 9mm revolvers.

The Sky Marshal grips filled my hand nicely, and the weight of the gun was nicely balanced. The sights were easy to pick up and use in the full desert sunlight. 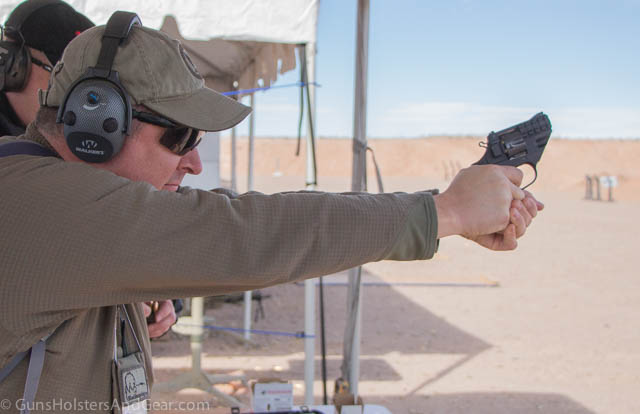 The trigger pull on this 9mm revolver was quite nice. In fact, it was one of the nicer double-action trigger pulls I have felt on a factory (ok, semi-custom) gun.

Recoil was a bit snappy, though I really didn’t notice it when shooting. For me, the grips did an excellent job at absorbing recoil. However, looking at the photos of people shooting the gun, I could see that muzzle flip was significant.

Everything about the Korth was great – and then I tried to dump the empty brass. Only five of the six shells dropped free from the cylinder. The case closest to the frame only partially ejected, and I had to pull it the rest of the way out by hand. Other shooters I watched had a similar problem. 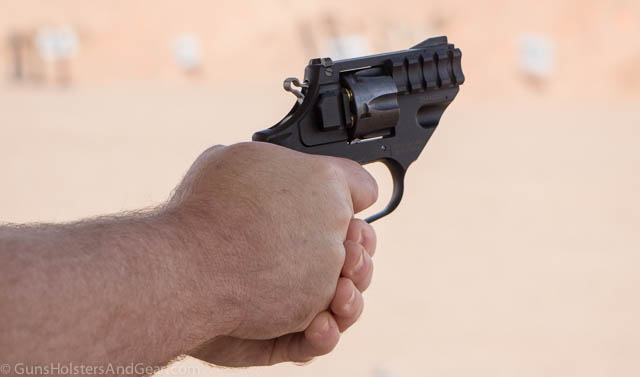 I only had a chance to shoot one cylinder of ammo, so I was not able to see if I could eject all cases by changing/improving my technique.

I like this gun a lot, but based on my very limited exposure, could not recommend it for personal defense. If I had a gun for test and found that it would eject spent cases flawlessly, then I would happily recommend it.

That is… pretty darn ugly.

My German is a little rusty. Does it have an aluminum or even a polymer frame? Under 20 ounces seems a little light for what looks like a larger than K-frame revolver if it were all steel. I wonder what the MSRP is in USD. Korth revolvers have never been known as “affordable,” kind of the Maybach of revolvers. That Korth won’t fit in any holster in existence. A Maybach won’t fit in my garage. And, man, those grapes look pretty sour to me…

It’s been three years since this gun was introduced…I need an AIWB holster for a Skyhawks. Does any ever read these things?

I imagine that few holster makers offer a ready-to-go solution for your needs. I suspect that you might be paying for a custom rig.

You might want to contact a company like Mitch Rosen and see if they can build you a rig for your Sky Hawk from the Ultimatum holster.

Alternatively, Wright Leather Works offers a build to order OWB for the Sky Hawk (here: https://www.wrightleatherworks.com/products/sky-hawk-predator ), so they might be in a better position to make you an AIWB rig in just a few months.

If you find what you need, would you mind posting the details here? I’m sure other Korth owners would like to know about it.

I discovered this past winter I’m allergic to leather….maybe just the finish on a couple of them…. right now I’m thinking a Remora might be my best choice. I’ve used them with success for several other guns. Thanks for the prompt response.