The original SUB-2000 has been a very popular folding carbine, and one of the company’s better known products. However, based on the feedback provided by thousands of shooters, Kel-Tec decided to enhance the classic gun and release it as the Gen 2.

Let’s take a look at the new gun, and how it differs from the orignal…

Many readers may be familiar with the original SUB-2000. It is a pistol caliber carbine that can fold in half for storage and transportation. The gun is largely polymer, uses a blowback design and is offered in a variety of models that allow for the use of Glock, Beretta, SIG SAUER and Smith & Wesson (59-series) magazines.

Many of the key features from the original gun carry forward to the Gen 2 rifle. Both guns fold in the middle, and both are available in 9mm and .40 S&W. However, there are a few changes that shooters will be interested in. 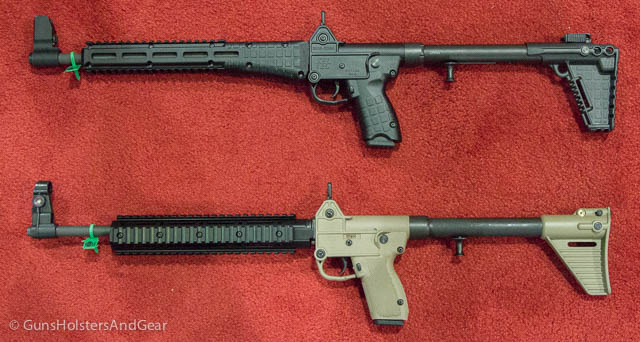 accessories – Adding lights, lasers and other accessories is a popular American pastime. The original SUB-2000 did not have any rails or other easy ways to attach things. Part of Kel-Tec’s upgrade to the carbine includes Picatinny rails at the 12 and 6 o’clock positions of the hand guard.

Kel-Tec also added Magpul M-Lok attachment points to the 3 and 9 o’clock positions on the hand guard.

adjustable stock – The new gun has a three-position adjustable buttstock. The stock does not rapidly adjust like an M-4. Essentially, you find the right position and lock it in. Adjustment lengths can add either 0.625″ or 1.25″ to the LOP. It is not adjustable on the fly.

sling attachment points – The new stock includes several new options for adding a sling. There is a wide slit in the stock for the attachment of a web-type sling. In the crook of the buttstock’s L-shape there is a single point attachment. A sling with a mash-type clip will work perfectly here.

new polymer – Kel-Tec is using a new polymer for the rifle stock. The new polymer uses a different blend of materials and has a different feel. I liked the new feel of the stock. Frankly, it feels like it is a higher quality material.

front sight – The front sight has been redesigned and is now made of aluminum. It is also removable, which exposes threads for the attachment of a flash or sound suppressor.

pistol grip – Combined with the new polymer, the redesigned pistol grip feels good in the hand. It is hard to quantify the feel of a grip, but I like the new version a lot.

The Gen 2 SUB-2000 will have models available that accept a variety of pistol magazines. New for the Gen 2 will be guns that will take Smith & Wesson M&P and Springfield XD magazines. The Kel-Tec rep said the two new magazine options are being introduced due to significant customer demand.

Kel-Tec products tend to be in high demand. The company’s guns seem to hit the right balance between price and performance with a dash of coolness mixed in. I expect the new Gen 2 SUB-2000 carbines to be very popular.

Currently, Kel-Tec expects to begin shipping in the third quarter. If past performance indicates future behavior, I would expect the initial production to be low volume that builds as the manufacturing process is perfected.

The expected MSRP is $500. This number is subject to change, but I would not expect it to increase by very much.

What do you think? Do you like the look of the new guns?

At the 2015 NRA show I was able to follow up with Kel-Tec on the Gen2 rifles. There are several things I want to pass along.

First, the guns are still on track for a Fall 2015 release. There are no anticipated delays.

Second, the MSRP is still at $500. I was afraid that in the time between announcement at the SHOT Show and the release there would be a price increase. Thus far, pricing remains the same.

Third, I was told that Kel-Tec is doing everything they can to ramp up production to meet consumer demand. According to the company, several design improvements in the SUB-2000 were made so that production is actually increased. So, for a given amount of time, Kel-Tec will be able to make more Gen 2 rifles than they were the original guns.

Just got in one in 40 and one in 9mm under the LEO program. Only had to wait two months. So far they look great cosmetically and mechanically and when it stops raining I will take them to the range for a good workout.

Do you have the info for the LEO program or can you tell me where to find it?

One of my buddies gave it to me a few years back, but I don’t have the email anymore.

This is the EMail of the person who handles the LEO orders at Keltec.Â Â  ([email protected])

Just bought mine today & shot it at the gun shop where I made the purchase. . First impression is that the trigger pull sucks !!! Peep sigh sighting hole diameter is way to small for point and shoot . The rear sight is easy to R & R but the trigger assembly is not so easy to remedy. Either way you are looking to spend $125 – 250. to remedy these glaring faults !