Perhaps the easiest way to visualize the new MPR 308-15 is to think of a standard AR-15 with a narrow channel extension in the forward portion of the magazine well. Add a third take down/pivot pin and you will have the basics of how the gun will be able to accomplish what it claims. 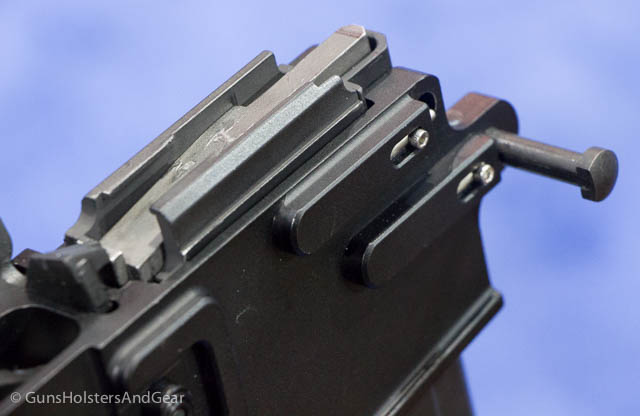 As the gun ships, it has a .308 Win upper and single stack magazine for the same cartridge. The upper attaches to the additional pivot and the magazine uses the new channel in the mag well. If you want to swap calibers to another short action round, such as the .243 Win or .300 WSM, just drop another Olympic Arms upper onto it.

Since the original AR-15 magazine well and pivot pin are left intact, a shooter can drop any caliber AR-15 upper onto the rifle. Standard AR magazines (GI, Magpul, etc.) will work to feed the gun.

Pistol grips and internals (trigger, hammer, etc.) are all swappable for any normal AR-15 components.

To ensure proper functioning of the gunÂ a unique buffer is used. For fixed length stocks, the shooter can swap out to any AR-15 fixed stock without any modification. 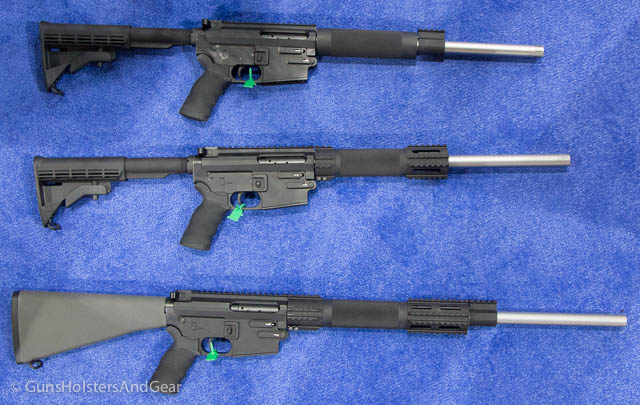 Adjustable length stocks are a little different. The Olympic Arms buffer tube has to be used – you cannot swap it out – but it has a commercial standard diameter. A shooter can slip a MFT Minimalist or similar stock onto the tube.

Olympic arms uses forged 7075 T6 aluminum uppers and lowers on the MPR 308-15 rifles. Match grade, 416 stainless steel barrels with button rifling are used. Rifles will come with either 16″ or 24″ barrels. Options are available to thread and/or flute the barrels.

In the 24″ configuration with the fixed, A2-style buttstock, the gun has an overall length of 42.75″ and weighs 9.0 pounds. The standard .308 Win magazines hold 10 rounds and can be blocked to meet hunting regs. Olympic Arms will also sell 5 round magazines later this year.

Currently, Olympic Arms will sell uppers in the following calibers:

Additional calibers are under development.

Suggested retail pricing for the 24″ version of the rifle starts at $1,689. A carbine version with an adjustable stock and 16″ barrel starts at $1,268.

Olympic Arms went through some difficulties, and I believe is under new ownership. You might want to contact them directly to see if they are making the specific magazines you are interested in: http://www.olyarms.com/

I have a Olympia arms 308 mpr. I love it. I want to purchase a complete upper in 300 wsm 24â€ heavy barrel and several magazines. Can you help me ? Thanks

I checked around, but couldn’t find any of those still in production. I’d suggest reaching out to Mountain Arms. They custom build 300 WSM uppers. I’ve never shot one, so I cannot offer any feedback as to how they run.