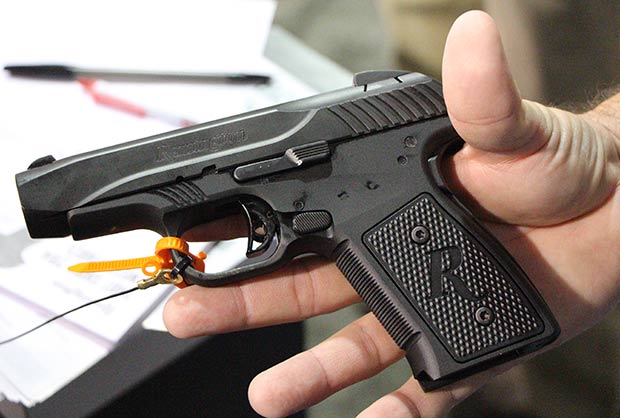 (Ed. note: For the latest information on the R51, read my most recent update here.)

I spoke with a Remington representative at the 2015 NRA show about the status of the R51 pistol. There has been a wide range of speculation about the gun ever since it was recalled in 2014.

The original problem with the R51 was tolerance stacking. Too many of the parts had to large of a tolerance. When some of these variations were “stacked” as parts were fitted to the guns, problems developed as the overall package was out of spec. I was previously told this at the SHOT Show, but I confirmed this had been the problem and was now fixed.

Remington had the problem fixed months ago, but with the pending move to Alabama, the company chose to delay production rather than gear up the existing facility for production when it was preparing to shut down. It was a tough decision, no doubt, but probably the correct one. I wish the company had been a little more communicative about this.

I was told the new R51 pistols have a number of new features that are designed to address other concerns that the company fielded from customers. These new features include:

Will the revamped pistol be able to shoot more than two types of ammo reliably ? Or still just Remington and one other……..if not, no thanks

So it’s the second week of July and no news on this pistol. Anyone have any idea when it will hit the market – again?

I had a long talk today with a customer service rep who returned an R51 and was waiting for it to be replaced so she has watching and listening to every email and briefing. These are in production now, scheduled shipments to begin late August, early September. First R51’s sent back to Remington will be the first to receive replacements. All “recall” guns will be replaced before any retail shipments go out. They are still offering refunds or an exchange for a R1 1911 to those who don’t want the replacement R51.

Thank you for the update! I really want to see this pistol succeed in being a winner. Once it proves reliable to certain testers; I will be buying one.

At this point that means at least 6 months to a year from now but I’m sure I’m not the only one looking at these.

On another note; I think most of us want to see Remington succeed in the long run as well. Not sure what happened internally there but if the will is there; it can be corrected.

Shortly after sending Remington an email about their lack of information on the r51 replacements I got a call from a Remington customer service rep. At that time, early June, she said they would be ready to ship in August. I must have got a lemon, my r51 performs flawlessly. I may take them up on the replacement only to get the free case and magazine, and a new gun of course but I have never had any problems. My son speculates that because I got mine through a friend who is a gun shop owner and he got one the first one in our area from his Remington rep I may have a pre-production model.

I wonder if it gives it extra value and if there is a way to find out for sure.

I asked a customer service rep, giving them the serial number but he said he could not tell when or where it was made. I found that unusual as they seem to be able to trace the date of manufacture and the location on some of their much older weapons. Put another 100 rounds through it this morning.

I find that hard to believe. There are strict controls by any manufacturer on guns and most anything really. For them to not know where or when sounds implausible. I think I would try, with try being the operative word, to talk with someone else in the company more likely to look up that info. It sounds to me like this rep was being lazy or evasive for some reason.

I vote for lazy. I think if I talk to the customer service rep who called me she could track it down. Didn’t have that info available the day she called. She gave me her number.

I would not buy ANY Remington product, even if you got Kate Upton free with it.

Really James Wegman!!? Even if it ‘came’ with Kate Upton?

I’ve never been a professional salesman but I’m guessing I could sell anything to you if Kate came with it; even if you’re gay.

On the off chance I couldn’t; I would buy it. To be straight up honest with you though; I wouldn’t even try. I’d keep her to myself if that was a real deal but of course; it never could be and never should be.

Well, It’s now mid September 2015 and still no signs of the Titanic, oops I mean R-51. Perhaps “Big Green” is too busy trying to get a handle on all its other recalls!!

Shoot about 1000 thru it and it will ‘be tolerant’; I really like mine; sorry they are having so much trouble. The new Glocks ( 41 & 42) are good alternatives….