Palmetto State Armory (PSA) is launching what may be one of the best values in AK-style rifles today. The new rifles are 100% made in the USA, establish a new standard and are veryÂ well priced.

PSA showed the new rifles at the 2015 SHOT Show in January, but have made a few tweaks since then. Let’s go over some of the details about these new rifles…

The new AK rifles will be available in a base model with the buyer’s choice of Magpul or wood furniture. Base guns will have:

The pricing on this version will be $699.

Another version of the rifle adds an optic mount and an Aimpoint H-1 sight. This package will carry a retail price of $999. Considering that an Aimpoint H-1 will sell for nearly $600 on Amazon, this package seems like an exceptional value.

The trigger pull on the display gun was much smoother than the import AKs I have shot in the past. Additionally, the safety was very easy to operate, with no sloppiness.

I spoke with Adam Ruonala of PSA. Ruonala recounted how the company did extensive research into the engineering background and history of the AK-pattern rifles. Like many AK-enthusiasts, PSA discovered that there are many design specifications for these rifles depending on when and where they were produced. All too often, the information is inconsistent or even contradictory. 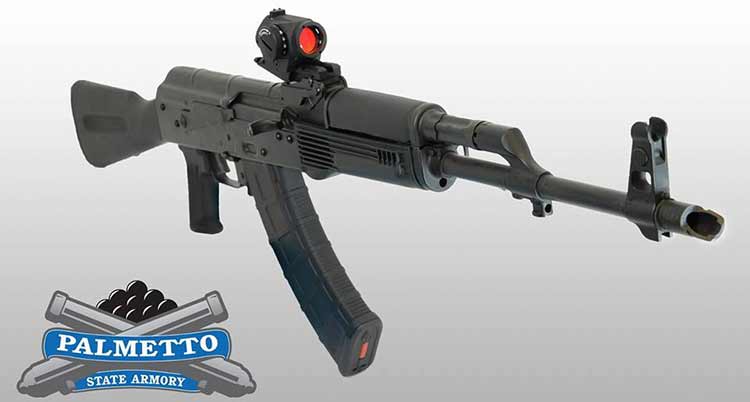 Ruonala stated PSA constructed the rifles to a specification that allowed for compatibility with existing AK parts. It appears PSA is willing to share these specifications with industry partners. Perhaps with a standard set of specifications to rally around, more US manufacturers will jump into the AK business.