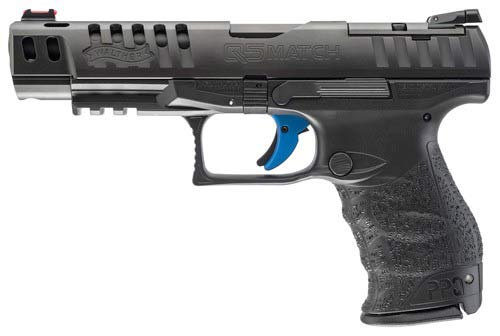 Interested in a new PPQ Match gun from Walther? It looks like the company will introduce one at the 2016 SHOT Show in January.

Details on a new 9mm pistols called the Walther PPQ Q5 Match have begun to leak out. Not much is known about the new guns, but I’ve pieced together details from several different sources to present the best information possible on the new gun.

The PPQ Q5 Match is a 9mm pistol that is designed for sport, not self-defense. Chambered in 9mm, the pistol has a 5″ barrel and overall length of 8.1″. This essentially makes it the same size as the company’s existing long slide PPQ M2.

Also like the PPQ M2, the PPQ Q5 Match uses a push button magazine release and not a lever like is found on the Classic model. Magazines will hold 15 rounds of ammunition, though there is conflicting information on how many mags are included with the gun. Some sources say two magazines, while others say three.

The forward end of the slide has been ported, though I have not been able to find any reference to the barrel itself being ported. I am venturing to guess, therefore, that the barrel is not ported.

The slide is pre-cut for a red dot optic like the Trijicon RMR. The gun will ship with multiple mounting plates to fit a number of different optics. A front fiber optic sight is standard on the gun.

Walther uses the Quick Defense trigger on this pistol. However, on this gun, the trigger has a bright blue finish.

Like other PPQ pistols, this gun has a polymer frame with interchangeable back straps. Both the frame and slide are black. “Q5 MATCH” is engraved on the left side of the pistol slide.

Based on multiple sources, it looks like the suggested retail price will be $849.

I’ve never had a PPQ for a review, but front fiber optic sight have been good performers. Obviously, this gun is geared towardÂ the sporting market. What do you think? Is it worth adding to your collection?

In a matter of weeks Apex Tactical is introducing one of their highly regarded, flat raced, reduced travel triggers for the PPQ. All signs pointed to it being part of this new competition model as Walther specifically requested a blue prototype. The blue trigger pictured above appears to be the normal PPQ trigger which is a huge disappointment. Don’t get me wrong, the standard PPQ trigger is an excellent trigger for target or defensive purposes but it’s take up / pre travel precludes it from being a great competition choice.

In order for the Q5 with Apex trigger to be “legal” in USPSA Production & Carry Optics divisions , the Apex trigger must be the stock factory trigger (or stock on another Walther approved for the same divisions.) The same is true to some extent in IDPA’s SSP div but I’m not as familiar with their rule book.

Hopefully Walther will offer a different sku with the Apex installed otherwise it will be useless for most of the competitions it was supposedly designed for!

You’re the only person I’ve ever seen complain about that trigger….why would you need an Apex for a PPQ…?…the trigger is already good to go for competitive matches. I’ve seen a few people so very well with a Q5 out of the box.