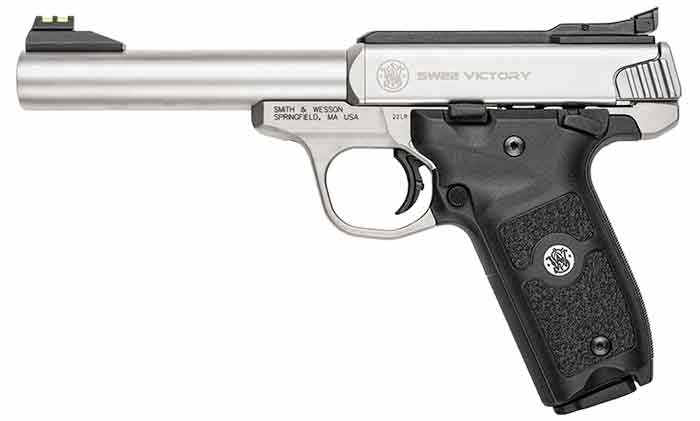 Days ahead of the 2016 SHOT Show, Smith & Wesson announced the return of an affordably-priced, dedicated .22 LR handgun to its line-up: the SW22 Victory. The new gun represents the first sub-$1k .22 LR platform pistol from the company since the Model 22A was discontinued.

As regular shooters will note, Smith & Wesson does make other .22 LR pistols and rifles. With the exception of the Model 41, these guns are essentially centerfire designs that have been reworked for the rimfire cartridge. The new SW22 Victory is truly a dedicated platform. 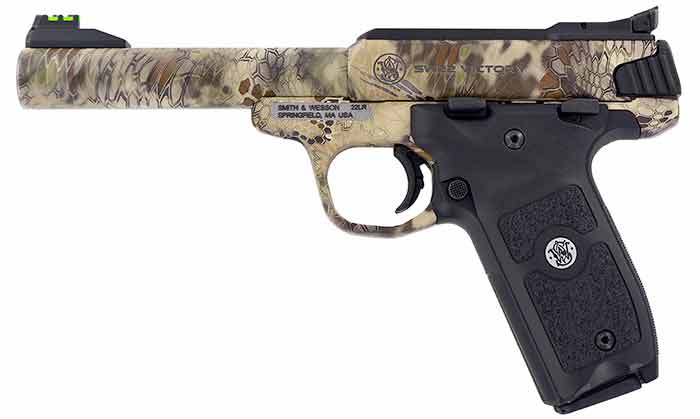 The new pistol is being introduced in three flavors: standard, threaded barrel and a standard model with a Kryptek finish. All three guns share the same basic specifications including barrel length, weight, sights and more. Skip down to the model chart for a comparison of the details on each.

The first guns will ship with a 5.5″ bull barrel. One of the models has a threaded barrel that will allow for the addition of a suppressor. With the heavy barrel and a 36 ounce weight, shooting this gun will be pleasant for even the severely recoil adverse. 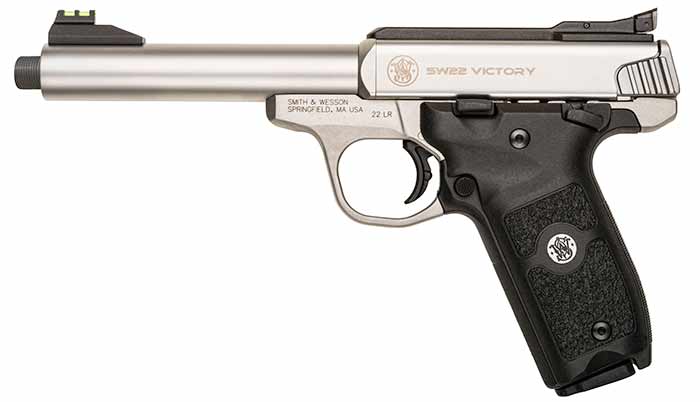 All three guns have fiber optic sights front and rear. The rear sight is completely adjustable. Additionally, the SW22 Victory pistols ship withÂ a Picatinny-style rail that can be added to attach a red dot optic.

The grip panels are removable, so I would expect companies like Hogue to jump in with aftermarket additions for this pistol. There is a frame mounted thumb safety on the left side of the pistol. 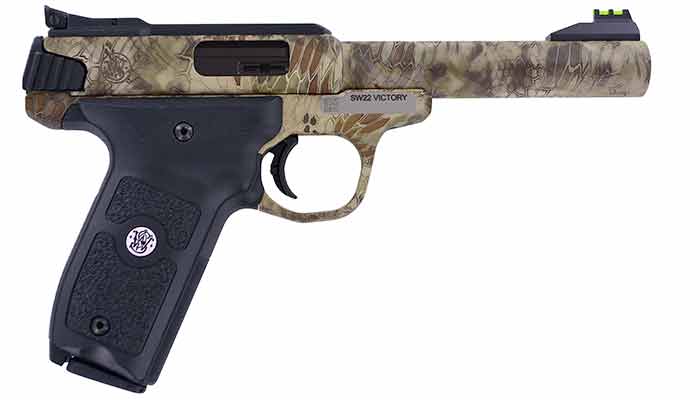 As one might hope, the SW22 Victory is a single action pistol, making it great as an entry level competition pistol or just hours of target practice. The trigger has an adjustable stop.

These guns ship with two 10-round magazines.

Smith & Wesson takes a bit of a shot at Ruger and Browning with the ease of takedown on this pistol. A single screw forward of the trigger guard is removed that allows the whole gun to come apart for cleaning. 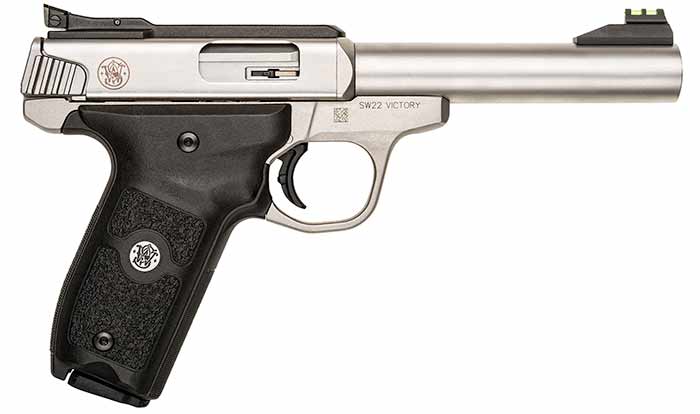 Smith & Wesson competition shooter Julie Golob mentions in the below video that aftermarket barrels can be added in the same way. I wonder what pre-launch arrangements may have been made with other companies for new barrels and other accessories.

I look forward to testing one of the SW22 Victory pistols in the coming months. Sound off in the comments section if you grab one and have some feedback on how it shoots. 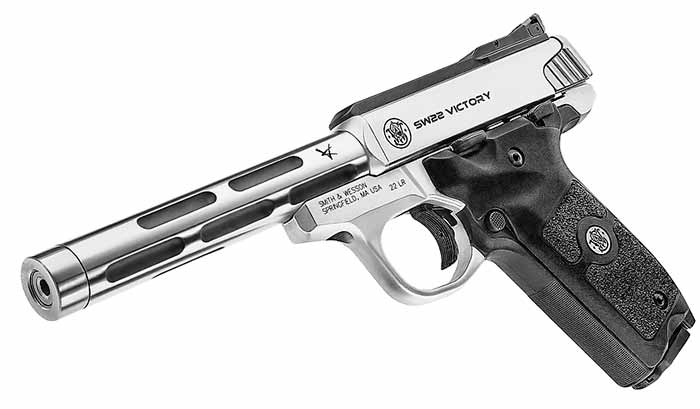 Volquartsen announced the company is now building two barrel options for the new S&W pistols. The first is a stainless steel barrel that is fluted and threaded. The barrel comes with both a thread protector and a blow forward compensator that can be used to reduce recoil. The fluting is in the company’s i-pattern. According to Volquartsen, the barrels reduce the overall weight of the gun while increasing rigidity and improvingÂ heat dissipation.Â Volquartsen lists the retail price for this barrel and compensator at $295. 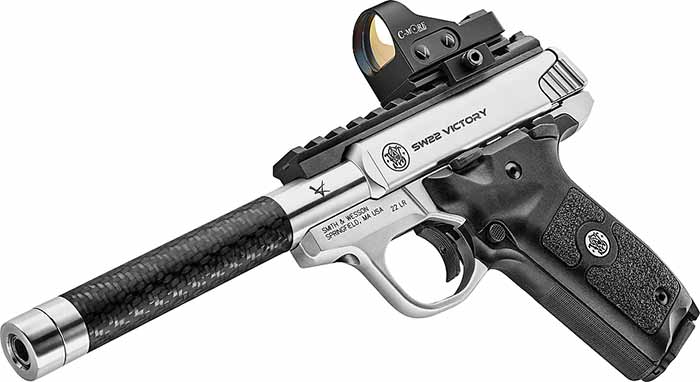 The second aftermarket barrel option for the SW22 Victory is the Carbon Fiber Lightweight barrel. This Volquartsen barrel is also threaded and comes with a thread protector. With this unit,Â Volquartsen uses a barrel tension technique to increase accuracy while drastically reducing the barrel weight. The retail price for this aftermarket barrel is $215.

Ed. note: The original article indicated that S&W did not offer a dedicated .22 LR target gun since the 22A was discontinued. This was an error. As a reader correctly pointed out, the Model 41 never left the line. I regret the error.

what does the performance package get you for a few hundred dollar upgrade.Is it worth it,is the trigger so rough that an upgrade is necessary?

The trigger on the victory is better than the trigger on my Kimber custom 1911 Raptor II commander. Donâ€™t let the price fool you. You are getting way more than what you are paying for. Iâ€™m not a S&W guy . The Victory is my first S&W and I own a large amount of firearms and Iâ€™m thoroughly impressed by every aspect of this gun. Itâ€™s a tack driver and the fiber optic sights are perfect. The only change that I had to make was buying a larger grip for it. I bought the â€œHiveâ€ grip and now this is the only gun I use when Iâ€™m trapping. I canâ€™t say enough about how much I love this little gun. I took a chance and Iâ€™m very happy I did. The grip on the Rutgers are better but thatâ€™s about it. The S&W trigger is far superior than the ruger. But both guns are accurate but I think the S&W is better and itâ€™s lighter but very well made. ðŸ‘

Is there a holster on the market for it?