Smith & Wesson discontinued the Model 22A line from its catalog, and has no public plans to reintroduce it at a later date.

Last year rumors began to circulate that Smith & Wesson was dropping the rimfire pistol from the company’s line up, but the gun remained on its site and in its catalog. I have since been able to confirm with a company spokesperson that the gun is now officially history.

Smith & Wesson has not released an official statement on why the guns were discontinued, and the spokesperson stated he had no information on whether the company will ever bring back the guns. 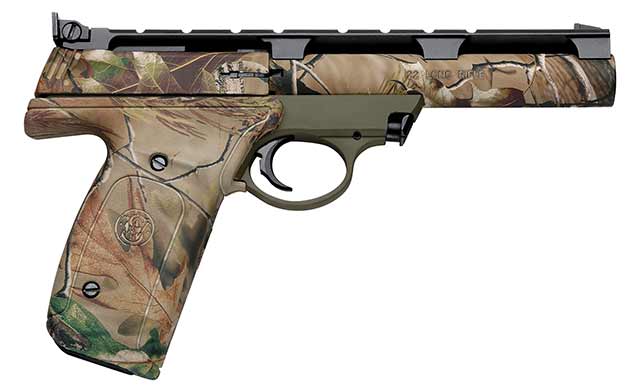 The elimination of the 22A pistols is another in a long line of discontinued legacy products from S&W. Third generation autoloaders, typified by classics like the 5906 and 3903, have long since passed. So have many classic revolvers.

For semi-automatic pistols, the company is focused on polymer frame handguns like the M&P and SD series, while the wheelgun category has been significantly trimmed back as compared to where it was decades ago. Almost perversely, the company that is modernizing its product line does offer 1911 pistols.

Having sat in on many Smith & Wesson earnings calls, it has been clear that management is pushing the M&P line that includes guns like the wildly popular Shield. Frankly, I suspect that S&W would like to drop the revolver line if the revenue could be recaptured by expanding polymer pistol sales. Certainly, I understand the profit motive.

Smith & Wesson still offers several varieties of the Model 41. However, the 41 is not designed for the same market. The MSRP on the Model 41 starts at $1,369 and goes up. The Model 22A was a sub-$350 pistol (street price) that, in my experience, shot exceptionally well.

The only choice left for inexpensive rimfire shooting from Smith & Wesson are the M&P22 pistols. A lot of people like these guns, butÂ they are not even remotely similar to the 22A. Between the two pistols, I’d take the 22A every day. 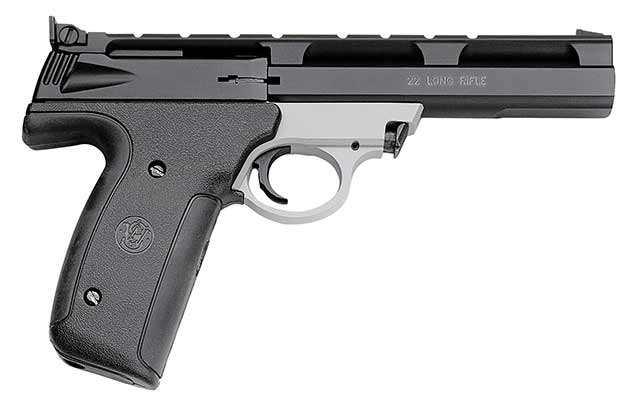 The Model 22A had been available in a variety of configurations prior to being discontinued. The basic all black model could be had with a number of different barrel lengths including 4″, 5.5″ and 7″. Camo patterns and polished slides were also available.

A Weaver-style rail was standard on the pistols for the easy addition of a scope for hunting and competition. The grips were made of a soft rubber and were very comfortable to hold.

I never measured the trigger pull on a 22A, but I always found them light and crisp.

These pistols can still be found on GunBroker, some even new. So, if this is one of the guns you’ve always wanted, I’d suggest buying sooner rather than later. 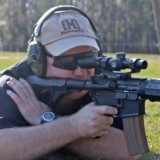 If you do not have one of these and you get a chance to buy one on the used market, you should do it. I have one and it is wall worth the money,

What a shame. We love ours. Accurate, Reliable & Inexpensive.. Came with a nice top rail for dots or other accessories..WTH was not to like ?

the 22 victory is more money and replaced it

Still have new ones here in Canada all over, just bought one! 🙂

I own 7 of these guns ,different barrels,grips ,and slides. A couple of them I had dipped. I love them all, I had one put together for my son,with glow-in -the-dark lime zombie green! His idea,not mine. Some are 4″,5.5″, and 7″ barrels, all shoot very well,a few are nib ,haven’t been fired ! I’ve called, contacted on line , and wrote to Smith& Wesson, and told them that stopping production of this AWESOME pistol is a crime, and they said they didn’t care, that they were more interested in developing a better model that they could make a bigger profit on ! They apparently are more interested in profit,than LOYALTY of their customers. I’m a person who has a short temper, so if they don’t care about us, they can kiss off as far as I am concerned. In the future ,I don’t plan on spending any of my dollars at Smith & Wesson!!,EVER. No longer your customer,Robert Harvell

only complaint was placement of magazine release

I have owned 7 of the S&W 22a’s proud to say the are remarkable in every way, low cost ,accurate, Beautiful design, and not deserving of the treatment shown by its manufacturer,who I regard as a money hungry ,blood sucking piece of crap! Its a slap in the faces of all of us who been loyal customers of the Smith &Wesson brand. In fact , I have a special hunting shirt with a special (bullseye) design on the back ,that I would like the person,or persons to walk point and wear and come hunting with me and some other S&W 22a owners ! Its even getting hard to find usable parts that haven’t had the prices raised ! Sorry if I sound unhappy or ignorant, but that’s how it is for me !!!!

That was a killer, Smith and Wesson
Discontinue the great, reliable, 22A,
I bought mine many years ago new in box, 2 magazine,
Never had any problems with it,
Just keep everything clean after shooting, have 5″1/2 and 7″ Barrels,
I like the 7″ inch barrel the best,
Plan on keeping this for sometime,
Have bought spare parts 22A.
have them on hand if needed,
All my friends have shot this 22A and end up buying one,
I don’t plan on buying the Smith and Wesson replacement .22 any time soon, well enjoy what you got,
Oldtimer from oregon

Do you have a main spring for the 22A?

Do you have spare main springs?

Just had a young man bring me one that had been painted with black paint (??) So I did my best to strip the paint off and give it a good cleaning up. Seems like a really nice little pistol but at times there are problems with the bolt fully seating home about 1/16”. Hopefully I can get this solved. I plan on acquiring this pistol from him as I like to have a little .22 ‘field gun’ to carry as I walk the farm. It seems like something I would definitely enjoy. If anyone has any ideas on why I’m having the bolt problem please leave me a reply.

I bought one in 1999 still have it l topped it off with a red dot scope for squirrel hunting this gun is extremely accurate killed many of squirrels over the years.

I have a model 22a with the 2 tone stainless side panel! I love this gun. Since it has a weaver rail on top I put a Bushnell red dot sight on it and this gun would de hard to beat for accuracy! Is there any other brand where the rail don’t move when fired ? That is the best part about this gun to me ,brilliant design! Wish they still made this great pistol!