Made in Slovenia, the Arex Rex Zero 1 Standard (1S) pistol will make its American debut at the 2016 SHOT Show in Las Vegas. The new pistol is the first of three different sizes and four different calibers the company is making that may make their way to these shores.

The Rex Zero 1 Standard is a duty sized pistol with a 4.25″ barrel that is hammer fired. Chambered in 9mm, the gun uses a 17 round magazine. Unloaded, it weighs about 28 ounces.

To my eye, the gun bears a striking resemblance to the traditional P-series of SIG SAUER handguns. However, the dimensions are definitely different, as are a number of features. I’ve never handled one of these pistols, so I do not know if there is any similarity between the guns other than a visual resemblance.

Arex equips the gun with a dual purpose de-cocker. When pressed down, it de-cocks the weapon. When pressed up, it can lock the slide to the rear. For those familiar with the SIG P-series pistols, the de-cocker on the Arex gun appears to be in the same general location as where it would be on the SIG.

Closer to the user end of the frame, the company has an ambidextrous manual safety. According to the company, the gun is designed to be carried either cocked and locked or with the hammer down in a DA/SA mode. Using the SIG pistol as a reference, the safety is where the slide stop would be on the SIG.

A disassembly lever is located on the frame of the Arex – pretty much where the lever would be on a SIG.

Arex uses a frame machined from 7075 aluminum. The frame has a hard coat anodized finish. The slide is steel and is nitrocarburized. In theory, this provides greater resistance to corrosion and daily wear and tear.

The sights are a 3-dot configuration. Thankfully, they are made of steel so should wear well over time. The rear sight appears to have a fairly flat face that might work for one-hand slide manipulation.

Not surprisingly, the sights can be replaced with other SIG-sized sights.

The barrel is cold hammer forged and is also treated to the nitrocarburizing process. The gun is rated for +P ammunition.

Arex machines an accessory rail into the gun frame. It appears to be large enough for most, if not all, pistol lights on the market.

The transition from the sides of the slide to the top appears to have a hard angle, rather than machined radius. I presume that this is because the company is using hex shaped bar stock similar to what SCCY and other companies do.

For a highly-stylized look at the manufacture of these new pistols, check out the below video created by Polenar Tactical.

Arex offers other sizes, colors and calibers in the Rex Zero 1 line. In addition to the Standard, the company also makes a Combat and a Compact pistol. The Combat is slightly shorter in length and lighter with a 3.85″ barrel and a 27.5 oz weight. It maintains the same grip size and magazine capacity. 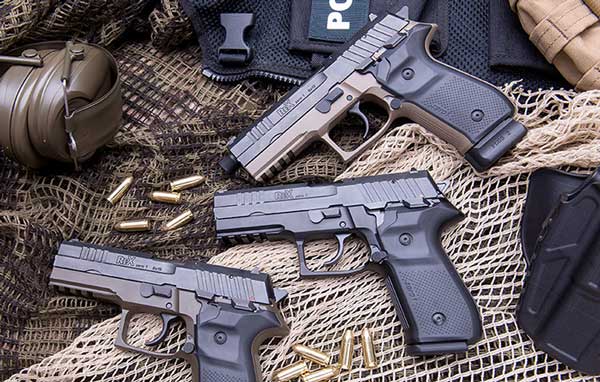 The Compact pistol has the Combat pistol’s length and chops the grip. The smaller magazines hold only 15 rounds and drops the weight to 25 oz. It also takes 0.4″ off the height.

The imported Arex pistols will be chambered in 9mm. However, the company also makes the Rex Zero 1 in:

I imagine the .32 would be a very light shooter indeed.

The new pistols are being imported by FIME Group in Las Vegas. FIME will provide warranty support on the guns. All of the Rex Zero 1S pistols will have a limited lifetime warranty unless purchased by law enforcement or the military. In those cases, the company will only warrant their product for a single year.

According to the company, the pistol has a service life in excess of 30,000 rounds.

Ed. note: Originally, this article misidentified the country of origin as Slovakia instead of Slovenia. This has been corrected. I apologize for any confusion. Thanks to readers Marek and David who pointed this out.

I tried these pistols in both regular and suppressed configurations at the dhow, and was quite impressed. My only frustration is that the importer and distributors will not give me a straight answer as to when the threaded versions will start shipping. We were also able to meet two of the engineers who designed the pistol, and they were both very nice and answered all of our technical questions.

This is little bit strange to me….because this is not new gun. It was already created in Serbia 2-3 years ago by company NB Inat…you can see exact same gun as Pistol B210 – Gepard and it is arround 470 $ here. http://www.nbinat.rs/index.php/products-2/pistols/pistol-b210-2

Wow, what a weapon, the FIME Arex Zero S1. I have over 15 guns, and this is the best I’ve owned, by far. Now, I am looking for a great holster, I can wear all day, for CCL.

Here are a few to consider:

I hope this helps.