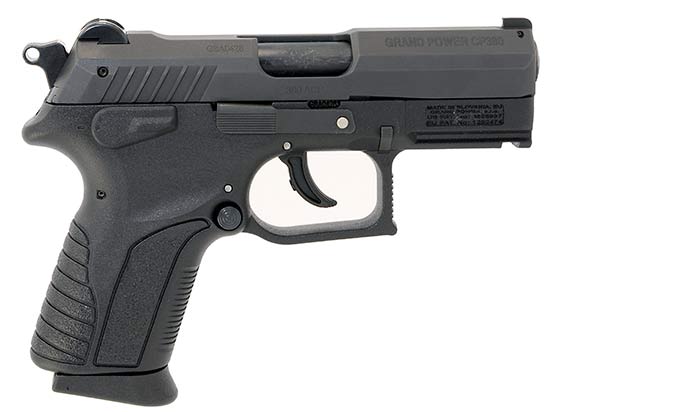 Eagle Imports will begin the importation of the Grand Power CP380 in 2016. The guns are new to the United States market and expand the Grand Power footprint in this country.

The guns are a double-action/single-action hammer-fired design with a steelÂ frame and polymer grip. According to a Grand Power representative, the mainspring is in the hammer group, which is part of the steel frame sub-assembly. The below photo shows the frame. The gun uses a straight blowback design. Â (Ed. note: I originally reported that this gun used aÂ rotaryÂ barrel action. This was incorrect. See the update below.) 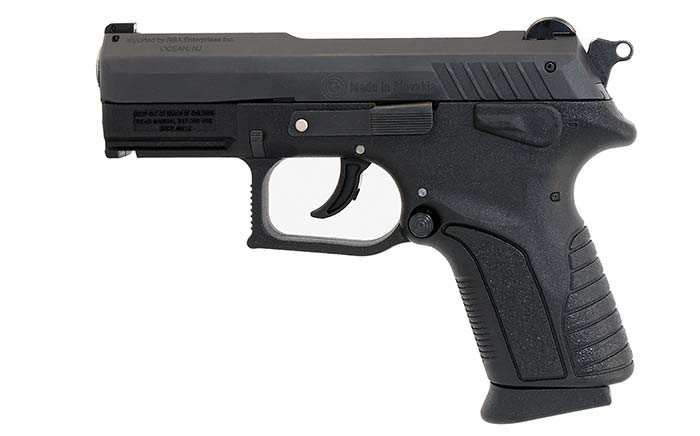 As I mentioned, this gun is more of a medium or compact sized pistol – not a subcompact pocket gun like the Ruger LCP. The barrel is 3.3″ long and the double-stack magazines hold 12 rounds each. The ammunition capacity necessitates a grip width of about 1.4″. Unloaded, the gun weighs 26 ounces.

The controls are truly ambidextrous – not merely swapable. All of the controls on the left side of the pistol are mirrored on the right side of the gun. In addition to the magazine release and the slide stop, the gun has a frame mounted safety/de-cocker.

Grand Power uses a three dot sighting system on the CP 380. The front sight is plastic. I prefer metal, but in most cases a plastic sight will serve well. The rear sight is steel with a pair of half-moons providing the external shape. This I personally dislike as it precludes the rear sight from use as a contact point for one-handed manipulation of the slide.

Eagle Imports backs these pistols with a lifetime service contract that covers the original owner. It does not appear the contract extends to any subsequent owners. The suggested retail price on these pistols is $528.

This pistol will be on display at the SHOT Show 2016 later this month.

I originally reported that this pistol used a rotary locking barrel system. This was based on the information provided (and still listed at this time) at the Eagle Import site. Unfortunately, this information is wrong, and I relayed the incorrect information.

After investigating the gun further, I was able to determine that this pistol doesÂ not use aÂ rotary barrel. Rather, it is a straight blowback design. This information was confirmed by David Copping, the Vice President of North American Operations for Grand Power SRO.

Thanks to reader Daniel Watters for catching the error and Laura Burgess Marketing in helping with the clarification.

I apologize for any confusion.

Unless they’ve made a change from the P380 they’ve sold elsewhere, the pistol is likely a straight blowback.

Both the Eagle Imports site and press release claim this is a “rotary locking barrel system,” but it wouldn’t be the first time an error was made in such things. I’ll see if I can get a clarification and photos from the company on this.

I was able to confirm your suspicions. The gun is a straight blow back design. I’ve updated the article, and I thank you very much for catching the error. Hopefully, Eagle Imports will correct its website soon and eliminate the confusion.

Thanks again for catching the error.