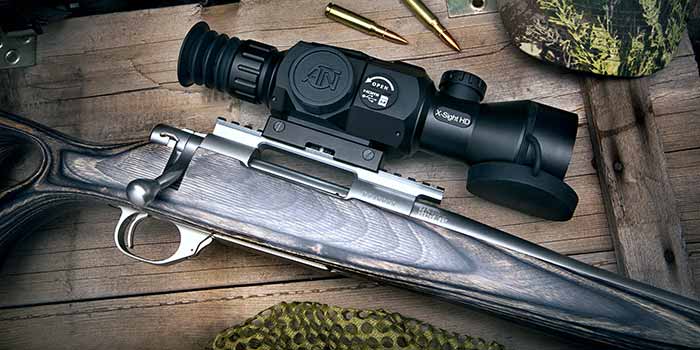 These scopes are electronic rifle scopes, not pure glass optics. The scope displays an electronic image to the shooter instead of the shooter looking directly through the glass at the target. This is akin to the difference between taking shots with a modern mirrorless camera as opposed to a traditional SLR. Among the many features of this kind of scope, aÂ shooter is able to electronically make adjustments to the point of aimÂ instead of clicking knobs.

Another huge advantage of this sight when compared to traditional glass only optics is its night vision ability. In the daytime, the display offers a clear view of the target in millions of colors. In night mode, the screen displays a green scale image that allows you to easily identify the target and make the shot.

The new scopes come in a choice of two variable magnifications: 3-14x and 5-20x. These are an increase of 2x on the top end of both scopes when compared to the original X-Sight.

One of the major hardware changes in the new scopes is the use of the latest ATN computer core: the Obsidian II. The more advanced core improves the ability of the unit to quickly process the images, record video and handle all of the other functions of the scope. The scopes have a built-in gyroscope for image stabilization.

One of the new functions is the built-in Gyro Range Finder. This new function allows the shooter range a target and adjust the reticle for the distance/point of impact. The units can also measure altitude and barometric pressure.

Images and video can be recorded directly in the X-Sight II. Video is recorded at a full 1080p resolution at 30 fps. Internally, the scopes have 4 GB storage. However, they also have a micro SD slot for adding your own storage (up to 64 GB) for longer videos.

The scopes also have built in WiFi and Bluetooth 4.1. From an iPhone or Android device, you can control the scope, post images online and more. Also, if you are shooting with a partner, your second can see exactly what you see through the scope by watching on the connected phone or tablet.

At this time, ATN has not released a suggested retail price on these scopes. The original X-Sight scopes retailed for $599 and $699. I beleive that the X-Scope II units are intended as replacements for the original units. If so, I would expect these to keep the same MSRP. The units are covered by a two year warranty.

A great thing about electronic optics is the possibility for upgrades through software updates. Improved algorithms and other functionality can be added through a firmware update. Because of this, ATN is offering a firmware upgrade to owners of the original X-Sight scope.

The new firmware upgrade will be available in a few months. It will allow owners to download an updater and add some of the functionality of the new scope system. Like updating your iPhone or Android device, the upgrade is still bound by the existing hardware.

For additional information on all of the new scopes coming out at the SHOT Show, follow my SHOT Show page here.

I ordered the 3-14x this afternoon. Can’t wait to try it out when I get it…I also heard that the new IR illuminator was supposed to work much better than the old ones did. Supposed to be much better but I think I am ordering a streamlight 88704 IR light anyway, just to be sure.

I am going to use it on my 300 blackout but also thought about using it on my Barnett Predator crossbow. Heard that they had a site programmed for the crossbow…

I just received a 3-14 yesterday and I have a major whiz bang woody going on here ! This is one amazing package of technology in a reasonably sized package. It will not only be great for hunting but also for a Zombie Apocalypse or SHTF .