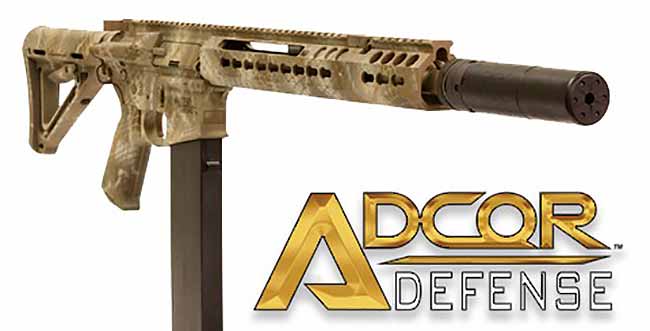 Adcor Defense will introduce a new AR-style rifle at the SHOT Show this coming week. Called the Super-16 A-556 Elite, the gun is a combination of an Adcor Defense build with a SilencerCo suppressor. Here are a few of the details…

The Super 16 starts with a basic Adcor Elite design. This means the gun has a long stroke piston that is attached to the bolt carrier group, and the barrel is free floating. The rifle has a non-reciprocating charging handle located in the upper portion of the handguard section. Adcor designed the charging handle to swap from the left side to the right side if the shooter desires.

If you are not familiar with the basic Adcor design, take a look at the following video:

However, the Super 16 deviates from the standard Elite series in two important areas: it has a sound suppressor and a KeyMod rail system. Let’s start with the suppressor.

Adcor teamed up with SilencerCo to include a sound suppressor standard on the rifle. The gun has a 14.5″ barrel. Adcor then adds the suppressor and pins it to make it a permanent part of the barrel. The barrel length then becomes 16.2″ removing the requirement for a second NFA tax stamp.

The new KeyMod rail is a 13″, 3-piece handguard. While a new handguard may not be a big deal for some rifles, with the Adcor rifles the piston system is contained inside the handguard to keep it off of the barrel. This allows for the barrel to float free, increasing potential accuracy. Moving from a quad-rail handguard to a KeyMod type was no small engineering feat I’d wager.

The new rifles will come in black as a standard color. However, custom colors such as flat dark earth can be ordered from the company as a Cerakote process.

While I imagine most people would prefer to have a removable suppressor, would you consider purchasing this rifle with a permanently attached one to avoid a second NFA stamp?