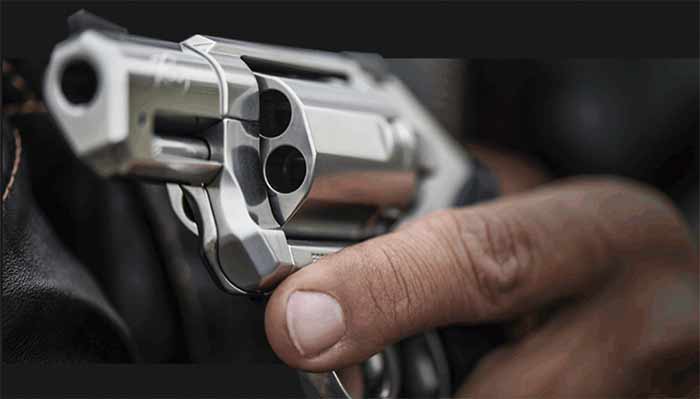 Kimber America did something that I had not expected: the company went retro and introducedÂ a wheel gun at the 2016 SHOT Show. The new Kimber K6s is a compactÂ 6-shot Magnum revolver that is likely to get a lot of attention in the coming months.

The biggest thing about the gun is the addition of an “extra” round compared to the five of other compact revolvers. Kimber managed to do this while keeping the cylinder relatively thin and the overall weight relatively light for an all steel gun.

The K6s revolver is chambered for the .357 Magnum. It need not be said, but I’m going to anyway, that this is a powerful cartridge. Even out of a short barrel gun like this one, the .357 Mag can generate a lot of power. Of course, it is like they said in the Spiderman comics: with great power comes great recoil…or something like that.

But don’t get all freaked out about the recoil. The lowly 9mm has the same SAAMI-spec maximum average pressure as the .357 Magnum: 35,000 psi. The 9mm +P goes a step farther with an average pressure maximum of 38,500 psi – more than the Magnum. My point here is don’t freak out about shooting a Magnum in a small gun. Yes, recoil is stout, but it is not going to break your hand.

Of course, the great thing about revolvers chambered in .357 is they will also shoot .38 Special. Many people may opt for a .38 +P to get decent performance with a lighter recoil.

As I mentioned above, the cylinder holds six rounds. For a small revolver, five is the typical number from the Smith & Wesson J-frames to the Ruger LCR and SP101 guns. 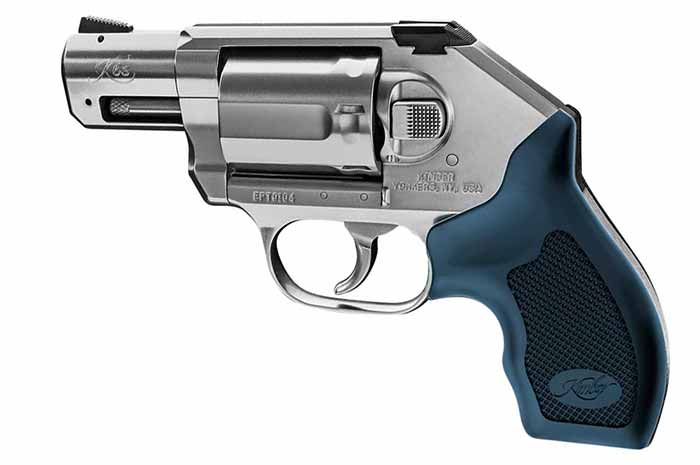 However, Colt used to make a six shot revolver that some readers may remember: the Detective Special. That gun was a favorite of many cops who carried a full size Colt duty gun as the speed loaders for one would work with the other. Kind of a magazine compatibility argument of the day.

I don’t know that the Kimber K6S will have speed loaders that will work with any other gun, but it would be kind of cool to have them the same size as a K- or L-frame S&W.

I am happy to say that the Kimber revolver has decent sights, and that they can be easily replaced if desired. Many compact revolvers have sights that require a grinder or band saw to replace. Kimber, however, designed differently.

The front and rear sights are black with a serrated face to reduce glare. If these don’t work to your liking, no worries. The rear sight is dovetailed while the front is pinned. I expect to see companies like Trijicon and XS Sights offer aftermarket options.

Kimber appears to be targeting the concealed carry market with the K6S. It has a short barrel – only 2″ – that makes it short enough for concealment in a pocket or other location.

The gun also has a completely shrouded hammer. It cannot be cocked and is double-action only.

DAO guns can sometimes have a heavy trigger exceeding 12 pounds. Kimber makes this revolver with a match grade trigger that has a pull rated for 9.5 – 10.5 pounds. This is a very reasonable pull weight, and I’m very interesting in trying it out.

Edges of the gun have been rounded to help reduce the likelihood of the gun hanging on a concealment garment. Even the front of the crane appears to have a scallop to reduce drag. 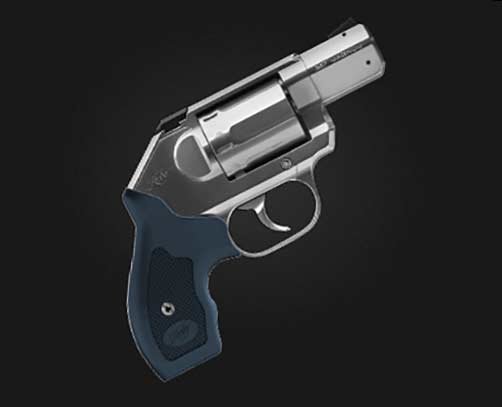 Kimber makes the K6S from stainless steel: the frame, cylinder and barrel are all stainless steel. While all steel construction tends to be heavier than aluminum or polymer, it is extremely tough. Even so, Kimber has managed to keep the weight on this gun to 23 ounces. This is a full two ounces lighter than a 5-shot Ruger SP101 with a bobbed hammer.

Revolver fans may observe a resemblance between the K6S and the popular 640 revolver from Smith & Wesson. While there appear to be numerous design differences between the two guns, I thought it might be interesting to see how they stack up against each other.

* The cylinder width is not provided by Smith & Wesson. The approximate sizes were provided by numerous sources.

** Smith & Wesson does not provide a factory trigger pull weight. In my own testing, I have found S&W J-frame revolvers tend to be around 12 - 12.5 pounds.

On paper, the two guns are remarkably similar. The Kimber is more expensive and slightly larger, but gives youÂ an additional round of ammunition plus a lighter trigger pull. I’m a huge fan of Smith & Wesson revolvers, but I have to say that the Kimber looks good when lined up next to the Smith.

I’m not sure where Kimber plans on taking the K6s. I would not be surprised to see the company offer the gun in a variety of finishes or models with different sights or a Crimson Trace laser. Public acceptance of the gun is likely to determine where to company decides to take the line.

In the meantime, I look forward to getting some time on the range with this gun. 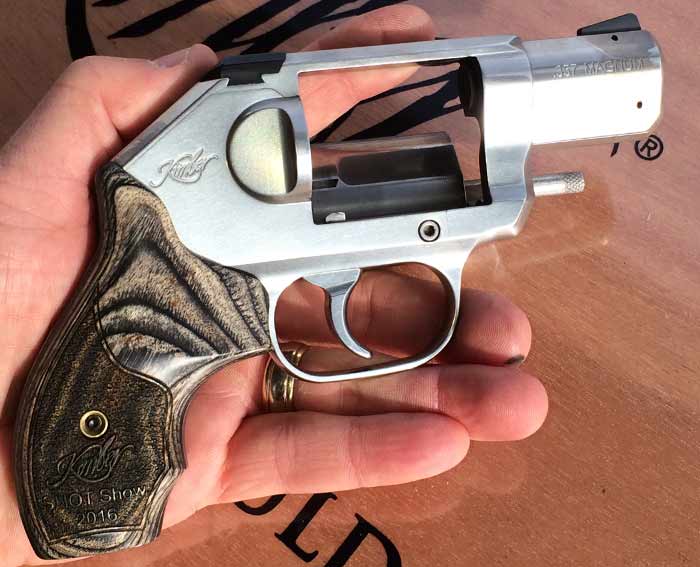 There is a lot of speculation going around about this new gun. So, I went to Grant Cunningham for accurate information.Â Cunningham is a longtime revolver smith and was part of the Kimber design team. Cunningham worked with Kimber every step of the way from concept to completion during its three years of development. 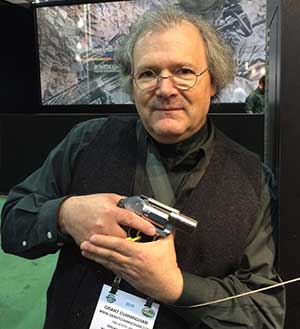 Cunningham was able to help me out with some specific information that address some of the speculation by internet experts:

licensed design – Kimber did not license this design from any other company, nor did they copy the design from some esoteric revolver maker. The design is all-Kimber. While I expect that there are certain design aspects that may appear similar across brands – the revolver is not a new kind of gun after all – Cunningham explained that Kimber started with a clean slate when this project began.

MIM parts – There are none in this gun. None. Zero. Zilch. 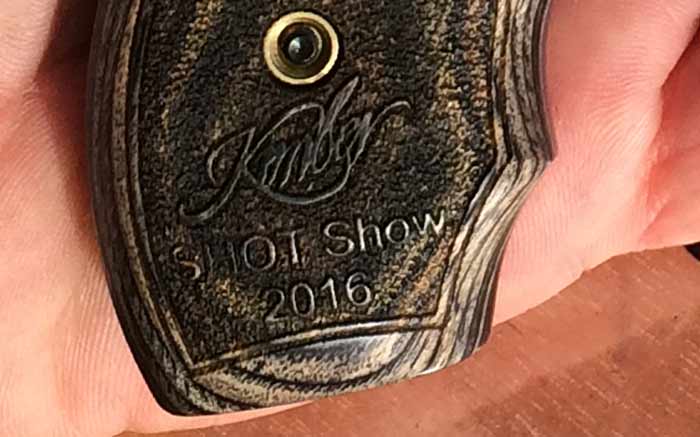 As time goes on, there will be various manufacturers that introduce accessories for the K6s. At launch, here are some of the things that are available:

Holsters – Right now, three companies have molds and are building rigs: DeSantis, Galco and Mitch Rosen. Additional companies are being brought in to expand the carry offerings.

Crimson Trace – CT will be making an aftermarket lasergrip for the K6s. It is possible that Kimber will offer this as a factory option, though nothing has been decided.

Speedloaders – Included with the revolver will be a pair of actual SpeedStrips that have Kimber branding. Additionally, 5 Star Firearms will be making their speedloaders for the K6s. 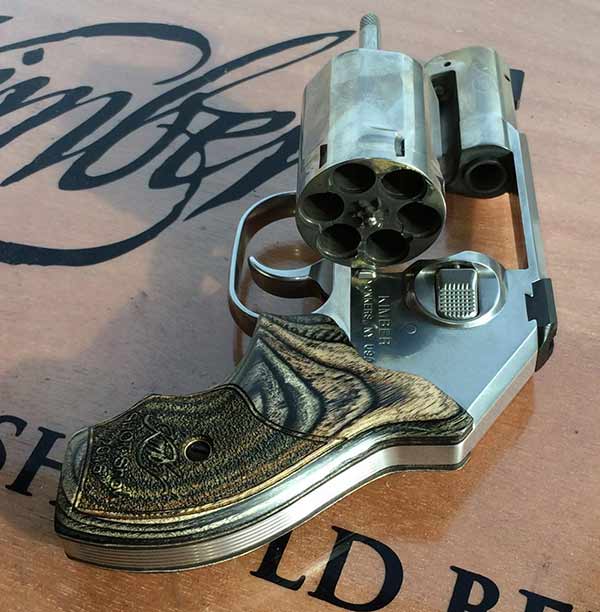 At the annual Media Day at the Range (a pre-SHOT Show event) the GHG crew go a chance to put hands on the new K6s. The model we handled was, in the words of one of the shooters, sweeeet.

The trigger was amazingly smooth – more Smith & Wesson like than a Ruger LCR, but without the staging often felt in J-frame revolvers. The return was strong, so short stroking is not likely a concern when running it fast.

Recoil with Magnum rounds was very controlable and nothing to worry about. For the recoil sensitive, .38 Special might be your best bet, but for an experienced shooter the full Magnum loads should be fine. 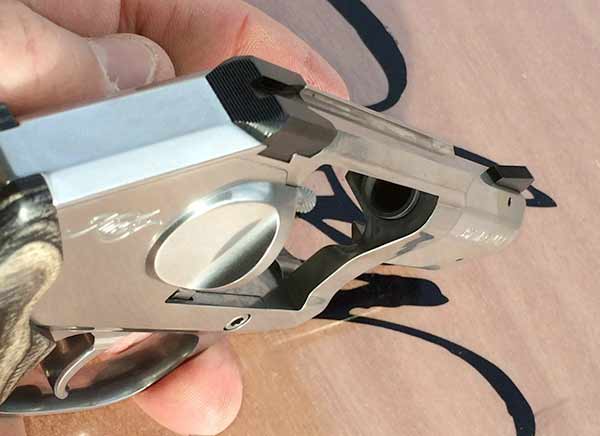 The sights were a bit lower profile than expected, but worked very well. Better than the typical gutter found on a lot of compact wheelguns.

The cylinder rotates counter-clockwise like a Smith & Wesson. The fit and finish were very nice. On the model we shot (in the photo above,) the gun had very nice wood grips. If you look closely at the bottom of the grips, you can see the special “SHOT Show 2016” designation.Â Though rubber grips may be more practical in many instances, I would like to have a set of these for my own. 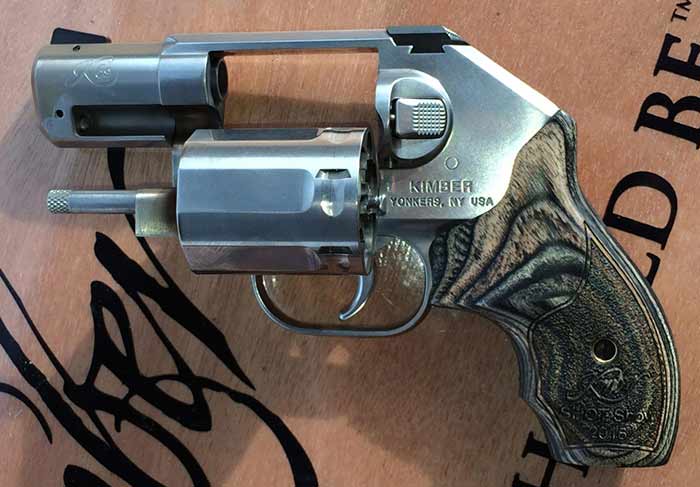 Hi all, I went to 5 star and no luck With the speedloader. At least there wasn’t anything specifically for the K6S. I love mine and the strip it came with is what I carry but I want a couple of loaders also. Any other model that works for this one? Any other six shot wheel gun I could search for that uses the same size speedloader? Kimber won’t use the USPS to ship it here and wants 75 bucks to send via FedEx.