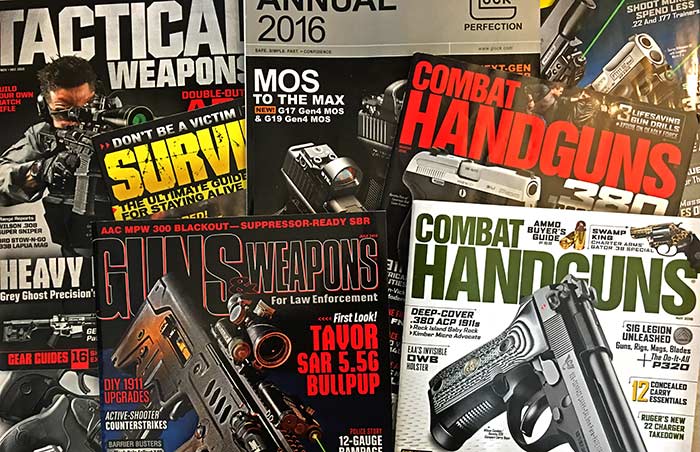 Although this impacts the gun enthusiast, Harris Publications produced more than 75 different periodicals covering diverse topics that ranged from the automotive industry to sports coverage to the latest in music and fashion. It is unfortunate to see this company go, as many people I know will be hit hard by the unexpected job loss.

To be completely fair, I was never asked to provide a positive or otherwise “good review” of any firearm or ammunition I evaluated for Harris Publications. The Great Remington R51 Reporting Fiasco, with both offline and online publishers participating, was certainly a classic case of saying good things about a gun that did not deserve it.

My criticism is not leveled solely at firearms magazines. I have see the same kinds of bad journalism in other magazines. A good friend relayed several stories to me about how the photography industry was plagued by manufacturer purchased journalism several decades back.

Harris Publications going out of business will send shock waves through the publishing industry. It was a major player. However, I don’t think it will be the last to fall.

19 replies on “Harris Publications Closing Down”

Yes, digital is the new wave. While printing presses, ink, and paper wont be used, neither will the mailman, the pressman, the paper makers, the loggers, and another wave of technological displaced jobs. But writers and photographers are needed, so I would hope to see high quality firearm internet publishing at lower retail cost.
Soldier of Fortune Magazine ended printed issues last month. But I hope my Shotgun News, now Firearms News and National Rifle Association pubs remain paper bound. Digital pubs need a whole lot of things to work to become readable, and packing in batteries, solar cells, and an ereader to read a formerly 5 dollar magazine when pack camping in the boonies is crazy. And I cannot read on an escreen or LCD screen without eye strain. Call me old fashioned. I prefer paper bound publucations.

I much prefer reading a bound book than the electronic version of the same. The paperwhite Kindle is pretty good, but the rest cause me eyestrain as well.

Of course, I can’t recall the last time I purchased a car, photography or computer magazine. I used to read those all the time in the 80’s and 90’s. Now, I grab what I need online and keep moving. It’s kind of sad as I feel like I miss out on exploring new things I could see in a magazine, but never know to Google.

You also can’t wipe with a Kindle or iPad in a pinch like you can with a paper publication. Well, you can, but would you really want to?

This is a sad day. Combat Handguns was my only “must purchase” gun magazine these days. It was usually read cover to cover then loaned out to friends. I still have boxes of them from when I started reading it back in the 1980s. While the gun and gear reviews were always helpful and honest as far as I could tell, the tactics, court cases, and first person accounts of defensive encounters was mainly why I read it.

I dropped the other favorites years ago due to the rising costs of purchasing them. Back when they were $3-4 I would buy several a month, when the prices got out of the reasonable range I cut down to my favorite and an occasional ‘impulse buy” of others.

An online only version would seem to be a way to keep the brand alive. Similar to what Jim Benson did years ago when the print version of American Survival Guide ceased publication. He managed to keep the tone and content of the paper edition intact, but eventually even that disappeared. The modern re-incarnation of ASG seems to be just regurgitated press releases from gear manufacturers, not real reviews and how to articles. If you guys could manage to keep it going online with it’s reputation and quality intact, you would have me as a reader!

Any idea what the current subscribers will be faced with? Will they receive money owed due to cessation of the magazines?

I’m afraid I have not been able to determine anything about subscriptions. I was just a writer and not privy to any of the business information about the company. I inquired with a few of the former employees – but they didn’t know anything either.

Unfortunately, it looks like the company pulled down its customer service page on at least one of the websites… I don’t want to be a pessimist, but I’m not sure anyone is getting a refund.

Thanks Richard, I appreciate the response and explanation. Pity, as I looked forward to the magazine. Thanks! Jeff

I had just renewed my subscription to ‘Guns of The Old West’ magazine for two years, guess I got screwed there, huh?