Sturm, Ruger & Co. announced the addition of a new rifle to the 10/22 line: the 10/22 Takedown Lite. The new rifle combines the features of the company’s existing take down rimfire rifle with the company’s modular stock and a lighter weight barrel assembly.

Ruger has been investing in its takedown style rifles, offering both 10/22 and SR-556 takedown versions of the guns. The original 10/22 Takedown was introduced at the 2012 NRA Show. I have not shot a 10/22 Takedown, but I found the SR-556 Takedown to be well built and accurate. I am hoping this rifle will exhibit the same characteristics.

The 16.1″ alloy steel barrels are hammer forged and have a 1:16″ twist. Ruger mates a 6061-T6 aluminum sleeve to the barrel which is then torqued down and is said to provide the correct amount of tension for optimum accuracy.

As one might expect, the barrels are threaded (1/2″-28) for the addition of a sound suppressor or other muzzle device. Since Ruger is now in the sound suppression business with its Silent-SR .22 caliber suppressor, I would expect that nearly all rimfire firearms the company introduces will have threaded barrel options. 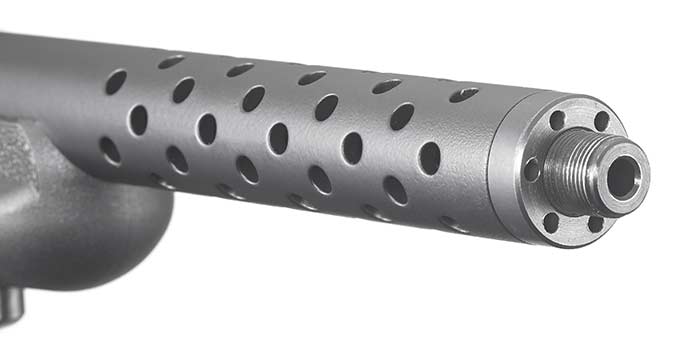 Ruger introduced the modular stock not that long ago, but the company seems eager to move it into more and more of its rifles. These stocks allow you to adjust the length of pull and comb height by swapping out components. This gun will ship with both a high comb, standard length and low comb, standard length module. Other modules can be purchased from the company as well.

This new gun uses the same rotary magazines that other 10/22 rifles use. An extended magazine release allows the flush fitting 10-round magazines to be easily removed. 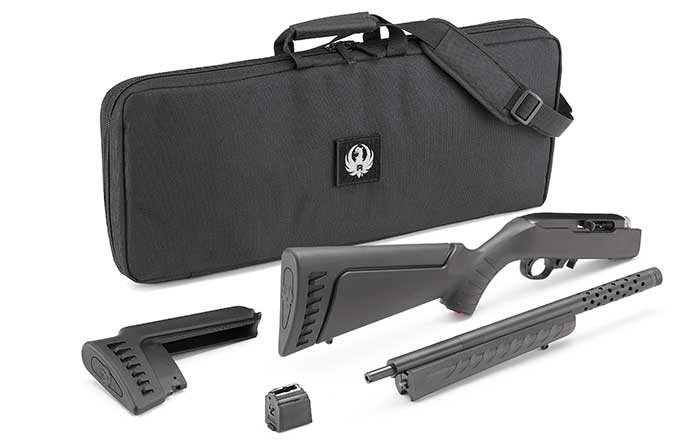 There are four versions of this new gun. The basic model has a satin black finish on the receiver and barrel assembly. The other three versions are functionally identical, but have a different colored finish: red, blue or green. All versions of the rifle carry the same suggested retail price: $659.Â Ruger includes a soft-sided carrying case with the gun.

I gave my wife a special edition 10/22 for Christmas. I’m thinking this rifle might be a nice way for her to return the favor.

It looks like the Lite weighs more than the regular Takedown. What gives?

You are correct that the original 10/22 Takedown with a fixed stock and standard barrel is 0.1 pounds lighter than the Takedown Lite.

However, the Lite has a different stock system than the original Takedown and – in theory – offers improved accuracy with its tensioned barrel system. If you compare the Lite to the Takedown model with the modular stock and target barrel (#21133), the Lite comes in 0.6 pounds lighter.

Although I have no insight into Ruger’s marketing department, I can only assume that the name was based on the comparison of the Lite rifles to the comparable product in the standard Takedown line. In other words, increase the potential accuracy of the rifle and gain an adjustable stock for only 0.1 pounds instead of 0.7 pounds.

At least that’s my guess at what they are saying.

Thanks for the reply Richard. I assumed the Lite moniker was in the same theme as Rugers 22/45 Lite pistols which are significantly lighter than the steel versions.

Improved accuracy seems a stretch ginseng the rifles 1) existing inherent accuracy, and 2) triple contradiction in it being a light weight .22 takedown rifle.

I went back and took another look at the Ruger press materials and they state:

“…combines the popular attributes of the 10/22 Takedown line with a new, lighter weight barrel…”

So, it looks like the Lite name is referring to just the barrel assembly as compared to the original and/or fluted target barrels.

Great movie reference, by the way. My 9 year old son loves to quote that line also.

Anyone know when it will be available in stores? Thanks

Ruger only announces when they are ready to ship. You local dealer should be able to order one for you. Just keep in mind that demand will likely outpace supply for a few months. Most distributors take care of the largest clients first, so you are more likely to be able to get one at a larger shop than a smaller one.