Earlier today, the Federal Bureau of Investigation awarded a contract to Glock for new 9mm duty pistols. The new contract has a potential value of $85 million over 10 years.

The FBI amplified a conversation regarding the relative effectiveness of different handgun cartridges when its training division published a paper in 2014 justifying the use of the 9mm cartridge for law enforcement use. A year later, the agency published a request for proposal (RFP) for new 9mm duty pistols. 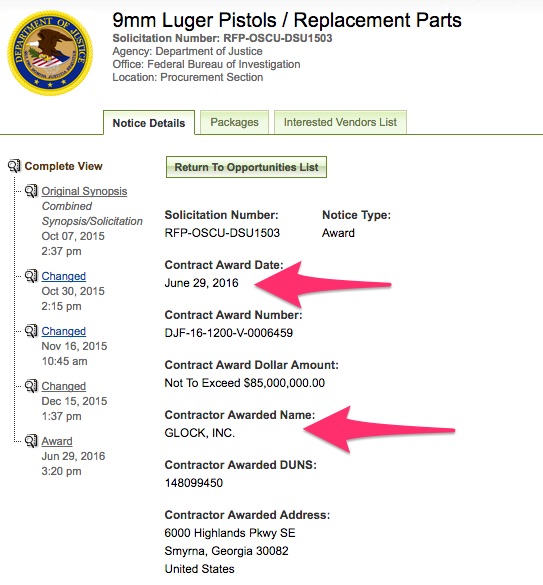 Currently, the FBI issues Glock handguns in .40 S&W – a cartridge that was developed largely because of the FBI’s condemnation of the 9mm in the wake ofÂ the infamous Miami shootout. The FBI transitioned to the 10mm, but had problems with full power loads.

What Are the New Guns?

At the time of this writing, neither Glock nor the FBI have released specific details on the guns chosen. However, we know what the FBI was looking for in the new pistols:

Under normal circumstances, that would be a Glock 19 and Glock 17 respectively. However – and this is a big one for the current and previous generation of Glock pistols – the FBI stated:

Finger grooves on the frame are not permitted. (emphasis theirs)

For me, the ideal Glock grip matches the Gen4 texture with the second generation’s lack of grooves. Perhaps the FBI feels the same way.

It will be interesting to see if Glock releases grooveless frames to the general market. I would happily pick one up if they did.

In addition to the two pistols, the RFP had requirements for training and Simunition pistols along with parts for everything.

While the deletion of finger grooves mentioned above is one of the most obvious changes to the Gen4 guns that the FBI wanted, there were several other items in the RFP that are worth mentioning:

In addition to the FBI, other federal agencies may purchase these pistols under the same contract. These agencies include, but are not limited to:

I’ve reached out to both the FBI and Glock for additional information. When I get more, I will update this article.

Complete waste of tax payer money. The Glock 22 and 23s they have on hand and the BILLIONS of rounds of .40sw they bought would last for years to come. Like another commenter said, it is an excuse for the government to now suck up all available 9mm ammo and manufacturing capacity. Oh, and about 15 years from now, we will be discussing how the 9mm is still to weak to stop a drug crazed lunatic.

9mm ammo is about to skyrocket.