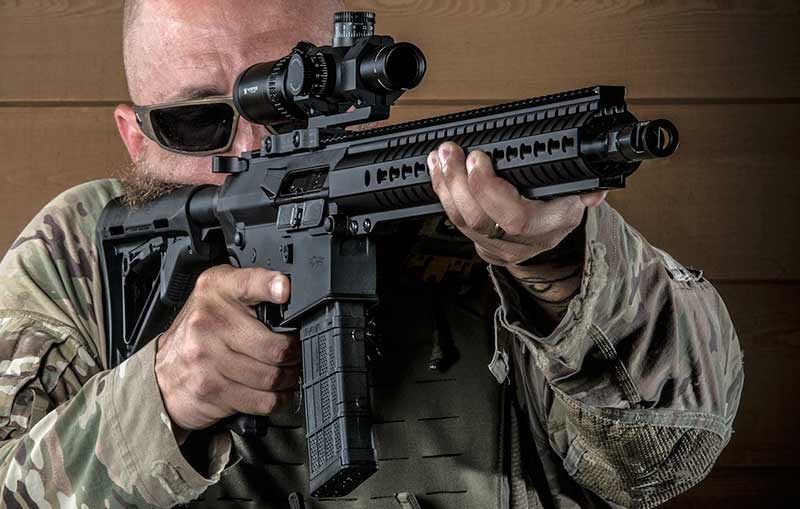 CMMG announced a new mid sized AR style rifle that is designed for larger diameterÂ cartridges. Called the MkW Anvil,Â CMMG custom designed this gun to use the strength offered by AR-10 components, butÂ with an eye to keeping the platform close to the AR-15 compatibility originally envisioned for the .458 SOCOM cartridge.

Let’s take a look at how the new platform is designed and the initial models that are being offered.

CMMG uses an AR-10 receiver and bolt – but smaller. Ok, I know that sounds contradictory, but I think once IÂ explain how the company does it, you will better understand why I say this. To get a better understanding of the company’s design decisions, I think we shouldÂ take a brief look at the SOCOM round first. 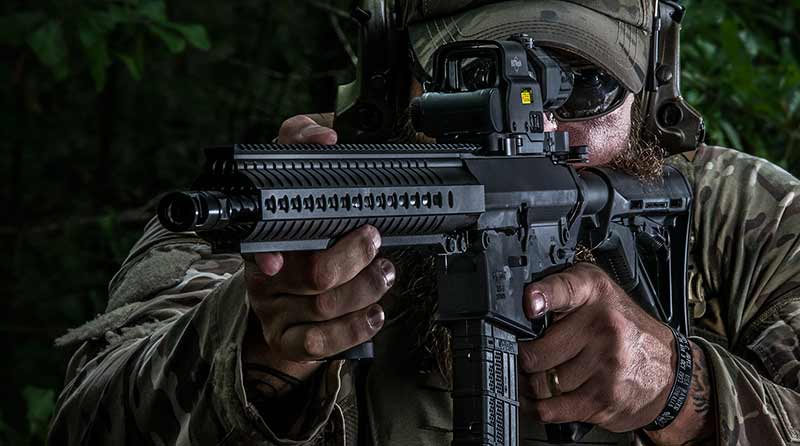 As the story goes, the .458 SOCOM cartridge was developed for the Special Forces communityÂ to provideÂ better terminal effect than the existing 5.56 NATO. However, it was important that the the new cartridge fit into the existing M4 platform: same magazines, receiver,Â etc.

In other words, the cartridge was intended to operate in existing guns with minimal modification, but offer a substantially increased ability to put enemy combatants down quickly. With this general framework, the cartridge wasÂ developed.

The .458 SOCOM uses a significantly larger diameter case when compared to the ubiquitous 5.56 NATO. It also uses a rim that is sized the same as the .308 Winchester’s case rim. A typical .223 Rem/5.56 NATO AR-sized bolt can have its face enlarged to run the .458 SOCOM.

Another nice feature of the .458 SOCOM is it will feed reliably from most standard AR-15 magazines. Since the round is so much larger, the SOCOM sits as a single stack round in the magazines with typical 20 rounders holding 7 or so of the larger cartridges. A 30 round magazine will hold between 9 and 11 rounds depending on the manufacture and how much force you put behind loading the rounds.

For the MkW Anvil rifles, CMMG went with a receiver and bolt based on its AR-10 designs. In theory, this can increase the long term reliability of the platform when compared to a standard AR-15 that has been upsized to the SOCOM round.

What is also interesting is a stronger design like the MkW Anvil would possibly allow the shooter to run that .458 SOCOM with hotter loads than originally developed due to the increased strength of the system. I don’t expect to see any “hot” factory loads, but for someone who knows what he is doing and carefully works up loads, handloaded rounds might offer increased levels of performance.

CMMG made a similar approach to heavy duty bolts when the company developed its Mk47 Mutant. In that case, the company opted for a larger bolt instead of the existing 7.62×39 AR-15 bolt options that were on the market.

Matching the AR-10 sized bolt is an AR-10 sized receiver. However, CMMG is not ignorant of the size and weight increases of the -10 platform when compared to the more svelte AR-15 rifles.

In an effort to balance size and durability, CMMG shrank the upper receiver by 0.75″ to reduce weight and length. Additionally, since the .458 SOCOM runs in standard AR-15 magazines, CMMG was able to reduce the magwellÂ size for additional weight reduction.

Although these guns are currently being built only for the .458 SOCOM, it seems obvious that the platform could be used for any cartridge that is designed for the AR-15, but has a larger case size than the 5.56 NATO round.

All of the initial models will ship with Lancer L-5 magazines. I do not own any rifles in .458 SOCOM, but from what I’ve read, the Lancer mags are widely considered as the best for the cartridge. So, good on CMMG for going with the best.

The MkW Anvil is a gas impingement system, and I’ve included additional details on it in the section below that describes the specific models being introduced. Additionally, I’ve detailed other items like handguards and buttstocks in that section as well.

The T model is the company’s base model .458 SOCOM rifle. It is equipped with many features, but with the line’s lowest price tag.

As with the more expensive models, this version of the gun has an SLR Rifleworks Sentry 7 adjustable gas block to tune the gun to the specific ammunition being run. Considering loads can run from 140 grain supersonic to 600 grain subsonic, it is conceivable that you might need to make an adjustment depending on what you feed the rifle.

The XBE model steps up the furniture used on the gun.Â On this rifle variant, CMMG uses a Magpul CTR stock and a MOE pistol grip. Other than the furniture, this gun is the same as the T.

If you want an improved trigger in the MkW Anvil, you want to look at the XBE2. This model comes with a Geissele SSA two stage trigger that replaces the single stage, milspec-type triggers in the T and XBE models.