A recently formed Nevada company, Full Conceal, Inc., is showing a new prototype product online called the FC-G17 that might be one of the worst ideas for a handgun that I’ve seen in a long time.

The FC-G17 appears to be an 80% receiver kit with a chopped grip and rail attachment. The receiver appears to be a heavily modified version of the Polymer80 PF940 80% lower that allows you to build a Glock 17/22 clone.

I see several potential problems with this design. The first is a problem with its use in self-defense.

Full Conceal suggests that it is ok to carry this completed pistol without a holster on its website. I can only assume this means that the gun is not meant to be carried with a round in the chamber. If this is true, one would have to draw the gun, remove a magazine from the front of the gun, insert the magazine into what’s left of the magazine well and manipulate the slide before the pistol could be used for self-defense. 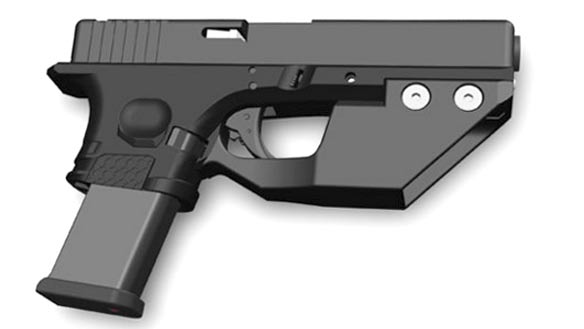 Of course, having an open magazine well invites debris and other material into your firearm that could prevent the insertion of the magazine at the time of need, or otherwise render it inoperable.

Another potential problem that I see is that this kit contains an unfinished receiver. Most shooters will not want to machine the frame to make it into a firearm. I’ve completed a PF940 frame, and while it is not terribly difficult to do, it does require time, tools and additional parts. Most people don’tÂ change the oil in their car; I wonder how many have a drill press with a cross vise to machine the rear rails on this?

Of course, there is also the question of reliability that comesÂ with a novice machiningÂ a firearm. With the PF940 kits, you have to hand fit the slide and there is some degree of break in required. I just don’t know if this is a good idea for a self-defense firearm that is marketed for the general shooting public.

Like I’ve said in other posts, I like innovation in the gun industry. While I think this specific product is a poor idea for the vast majority ofÂ self-defense situations, I still like the idea of rethinking our concepts of what a concealed carryÂ firearm should look like.

While I would not recommend this product in its current state, I hope the company continues in its “outside of the box” thinking and develops something that will really improve some aspect of the carrying of arms for defense.

What are your thoughts on the FC-G17? Am I off-base and this is a great idea? Is it just good idea that needs refining? Or is this a disaster waiting to happen?