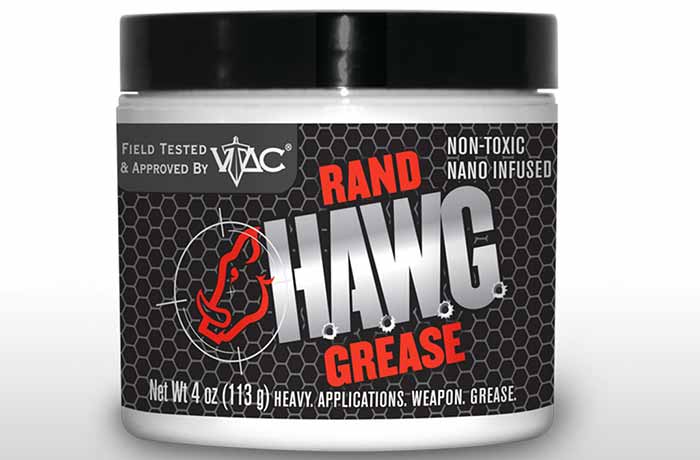 The folks at Rand CLP are now offering a grease for your guns: H.A.W.G.

Heavy Applications Weapons Grease, or H.A.W.G., is a non-toxic weapon lube that was originally developed for use on heavy machine guns like the Ma Deuce. Heavy machine guns generate a lot of heat, pressure and wear on their parts which necessitate an excellent grease to keep things running. According to Rand CLP, that is exactly what the company developed this grease to do: perform under heat and pressure.

The folks at Rand have tested this grease in the lab and in the field. H.A.W.G. passed the U.S. military’s 100 hour salt spray test and is rated to run in a wide range of temperatures: from -30ËšF – 619ËšF.

Rand also states the grease has done very well when packed in sound suppressors and with corrosive ammunition. (Side note: anyone who packs their sound suppressors with a grease or oil – would you please sound off in the comments below with what you use and how well it seems to perform? Thanks!)

The formulation of H.A.W.G. includes nanoparticles that supposedly bond to the metal surface of your gun. These particles are supposed to fill in any tiny imperfections in the surface. In theory, this makes the surface smoother and reduces friction and heat. It also acts as a barrier to anything that would cause the metal to corrode.

I have no way of testing these claims, but I have used the original Rand CLP product extensively during the past 2-3 years. I’ve used it on my pistols, ARs and AKs with good results. All of the guns run as reliably with it as they do with other oils. A side benefit is my guns seem to clean much easier with the Rand CLP. Easier cleaning is one of the promised benefits of nanoparticles in the lube.

For what it is worth, I live in Florida and rarely shoot in freezing temperatures. I cannot speak to the lube’s performance in extreme cold, but aÂ thinner gun oil might be a better choice in those environments.

Rand is already shipping H.A.W.G. and a 4 ounce container has a suggested retail price of $16.99. You can get it on Amazon for a bit less.