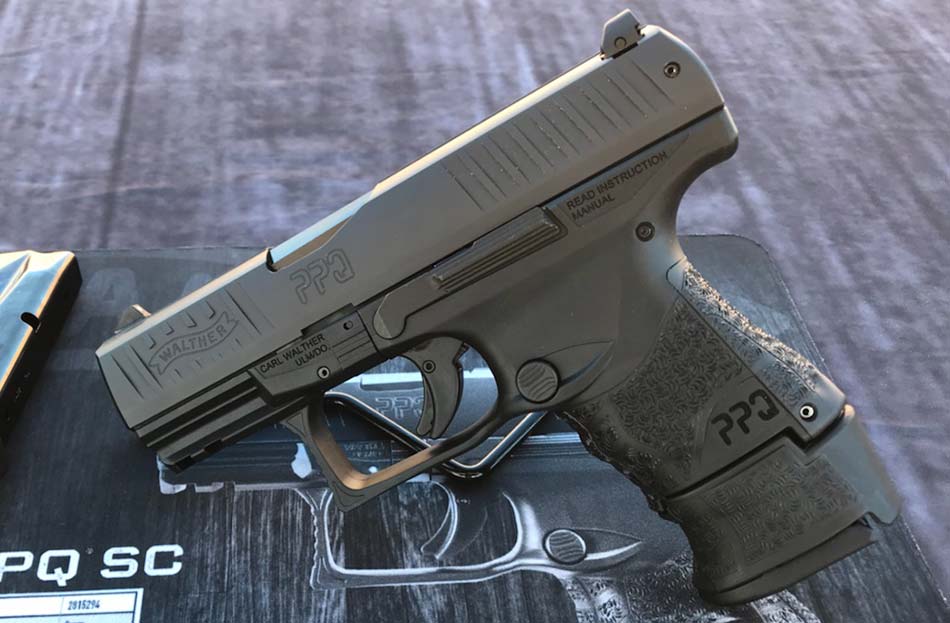 Walther Arms announced its latest pistol: the Walther PPQ SubCompact. This new 9mm handgun takes all of the popular features of the PPQ M2 and puts them into a more concealable platform. This announcement was made at the 2018 SHOT Show where the guns were on display at the Industry Day at the Range event.

In many ways the Walther PPQ SSC is just a chopped PPQ M2. However, that description diminishes how good this pistol could be. Nevertheless, it shares many of the iconic features of the larger gun just in a smaller package.

The PPQ Sub Compact has a 3.5″ barrel with a 1:10″ twist. This is 0.5″ shorter than the standard PPQ M2. One of the key measurements of a concealable handgun is the grip length. While Walther doesn’t give a measurement for the grip alone, the height of the gun is listed as 4.4″. This is a drop of 0.9″ from the full size pistol.

In more concrete terms, this means that the subcompact version of the gun is not long enough for the pinky to wrap around the grip. With the gun chambered in 9mm, 10 rounds fit into a flush seating magazine.

What is very nice is full compatibility with the larger 15-round and 17-round magazines of the larger PPQ guns. These mags use a spacer sleeve to provide a full grip on the gun. Also, the spacer sleeve prevents the magazine from striking the ejector when inserted into the pistol. 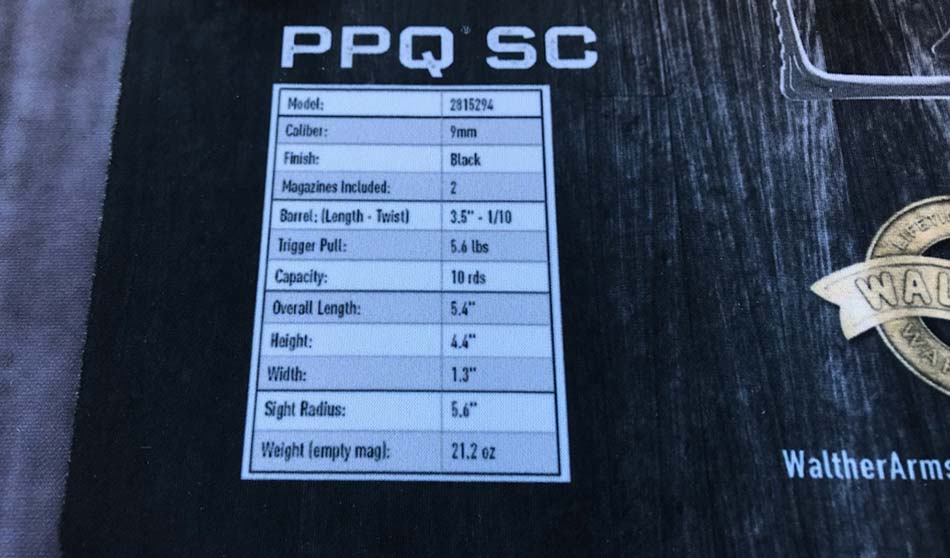 There is no immediate word if a .40 S&W chambered gun will be offered in the future. I doubt that adding the .40 S&W is a priority for Walther Arms since theÂ 9mm is the most popular self-defense cartridge in existence. However, I could see them introducing it as it could be used as a backup gun for law enforcement agencies in a manner similar to how Glock positions the G17/G22 and G26/G27 pistols.

Walther continues the use of a push button style magazine release on this pistol. While I prefer this, I know there are many Walther fans who like the lever style release. While not truly ambidextrous, the button can be moved to the right side of the gun if you prefer.

Keeping with the idea of matching the gun to the shooter, Walther Arms retains the ambidextrous slide stop lever. Additionally, the grip has backstrap panels that are swappable.

The PPQ SC has a suggested retail price of $649.

Walther Arms states the PPQ Sub Compact is shipping now. You should be able to slide by your local gun shop and order one up today. I would expect demand to be heavy for these initially, so you may have a delay depending on how many your dealer can get.

While I will likely keep my Walther PPS M2 as my daily carry gun, I am very interested in this gun. Having additional rounds on tap is certainly a good thing. The ability to use larger magazines in the PPQ SubCompact is also very interesting to me.

I look forward to trying one of these out in the near future.

Special thanks to Paul Carlson of the Safety Solutions Academy. Carlson is a top notch defensive firearms instructor and an honorable man. If you ever have a chance to shoot with Carlson, jump at the opportunity. You won’t regret it.

While I haven’t yet had a chance to shoot this pistol, Carlson did and was able to provide these photos. Later today, he will have a video that I will post here.

To, Extension 425
From, Dante Mastrosimone
I have not received billing email for 2 Walther M 1 17 round magazines yet.

I’m not sure where you purchased your magazines, but it wasn’t from here. This is a news/reviews website and I do not sell anything directly.

I’ve had good luck dealing with GunMagWarehouse. They ship fast and have reasonable prices on magazines. The Walther PPQ 9mm 117-rounders are here if you still need a pair.

I have a P99c AQ 9mm pistol, It is a compact model and would like to buy an extended 15 RD
magazine with the extended pistol grip as shown on your site, I have a paddle type magazine release [ not a button] Can you help me.

It looks like no one – even Walther – has those sleeves in stock. It is possible that they have been discontinued, so if you find any, grab them up!

I even checked some used sites like eBay and GunBroker and came up with nothing.

15 round magazines – without the extension sleeve – can be had at a variety of places. I prefer GunMagWarehouse due to the great customer service and good prices I’ve gotten in the past. The magazines are here. Also, if you are interested in 20-rounders, they have those here. Yes, it is an affiliate link which helps keep the site going. But, I would recommend them even without any benefit to me.

If you find any sleeves, would you mind sharing where you find them?