HatsanUSA, the exclusive US importer of firearms from Escort Shotguns, announced a new line of gas-operated scatterguns at SHOT Show 2020.

The new Escort Versatile Tactical Shotgun (VTS) series is designed to replicate many of the controls and features of the AR15-style rifle. The concept is to have shotguns that will very familiar in the hands of shooters who are comfortable with modern rifles.

Escort is making a range of VTS variants. Initially, the company will offer the DF12, SDX and BTS shotguns to the US market.

Let’s take a look at each.

Escort considers the DF12 as the premier VTS model.

Offered only in 12-gauge, the gun is magazine-fed and can chamber both 2.75″ and 3″ shells. The standard magazine capacity is 5 rounds while a 2-round mag will also be available for hunters and others needing more limited capacity.

Like an AR-style rifle, the DF12 has an upper and lower receiver that is held together by a pair of pins. Also like an AR, the upper and lower separate for easy cleaning and maintenance. The receiver halves are made of black anodized aluminum. Escort does not identify the aluminum used other than “aircraft alloy.”

The DF12 barrel is 18″ long and is hard chrome plated. It is internally-threaded for chokes and ships with a slug-friendly cylinder bore choke brake. Included with the shotgun are full and improved cylinder (F and IC) chokes.

The SDX shares a similar configuration as the DF12, but has two significant differences.

First of all, the SDX is available in both 12-gauge and in .410 bore. So, if you are looking for a lighter shooting shotgun, the SDX might be a better choice than the DF12.

The other major difference is that this gun uses a polymer lower and forend instead of aluminum. According to the company, the magazine well has metal guides to ensure proper magazine seating and increased durability.

Like the FD12 shotgun, the SDX is available in both black and FDE.

Using the same operating system as the two other shotgun models, the BTS reconfigures the package into a compact bullpup format. Keeping the 18″ barrel, the company is able to reduce the overall length of the shotgun by 9″. This gives the BTS a significant advantage in maneuvering.

AR shooters might expect to see a gas tube running above the barrel from the front sight tower. That is not how Escort designed this system.

Instead, the company developed a gas piston that floats around the barrel of the shotgun. According to the company, this improves the efficiency of the system while decreasing the overall weight and size of the shotgun. 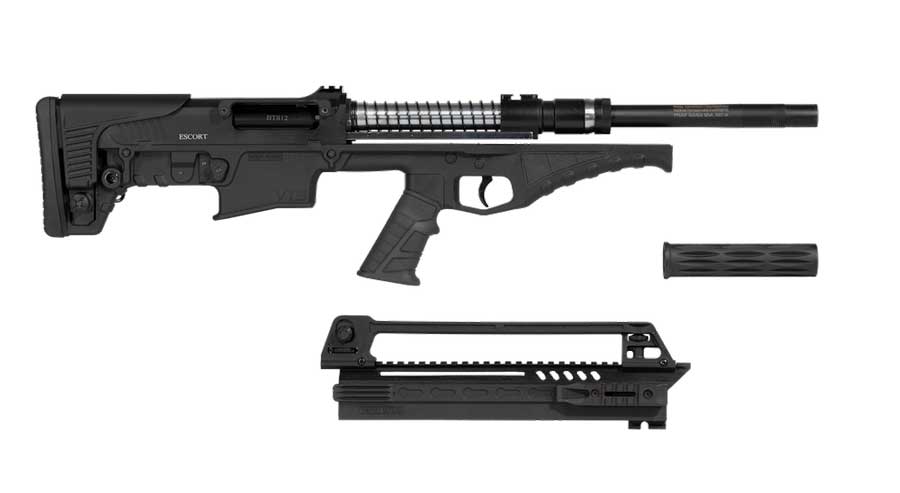 By having the piston coming back with equal pressure above and below the barrel, muzzle rise should be reduced. In theory, the recoil should be closer to a straight push backward.

Modern rifle-style shotguns are not an entirely new concept. However, this seems to be a more complete approach to the design. Shooters have three different variants to choose from – two AR-style and a third in a bullpup configuration.

For me, reliability is always a key factor. For a semi-automatic shotgun, I expect it to run with light and heavy loads without a lot of tweaking. I look forward to seeing how the Escort VTS line does.

8 replies on “Escort Versatile Tactical Shotgun: A New Series of Scatterguns for the Rifle Crowd”