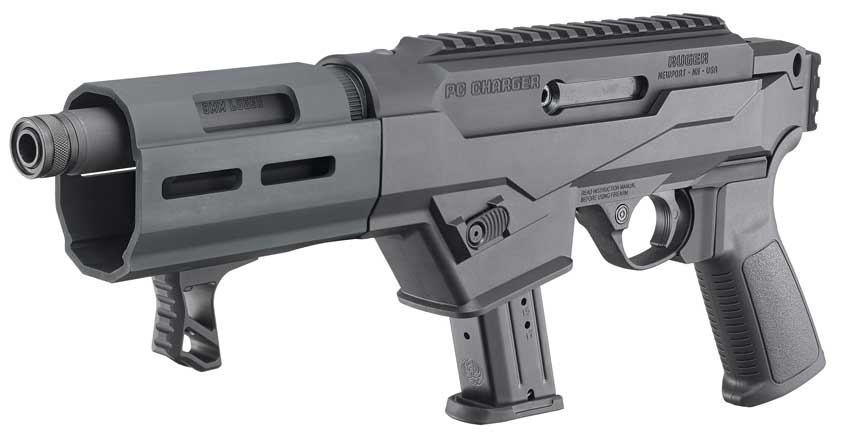 The standard AR grip on the pistol will likely please most buyers. However, it is compatible with all other AR-style grips. This allows you to swap in any other grip you might like.

Like it’s bigger brother, the PC Charger Pistol is a takedown gun. While a pistol doesn’t benefit very much from a takedown feature, it does offer some additional flexibility in the transportation and storage of weapons when space is at a premium. Likely, this feature is a holdover from the Carbine and it was easier to incorporate it into this gun rather than develop a new design.

Ruger uses a CNC machined aluminum forend on this pistol. It has M-LOK attachment points and a hard coat anodized finish. Further, a factory handstop is mounted in the 6 o’clock position as standard.

A 6.5″ threaded barrel is standard on this Ruger pistol. The barrel is cold hammer-forged with 1/2″x28 threads. A thread protector is included with the gun. Ruger rifles the barrel with a 1:10″ right-hand twist.

Like the carbine, the Ruger PC Charger Pistol has swappable magazine wells. Ruger SR9-type magazines are fed from one and Glock 17/19/26-type magazines from the other. Both ship with the pistol. I’ve tested the PC Carbine and the wells swap easily. Guns ship with 17-round Ruger magazines. A limited capacity (10-round) magazine version will be available for citizens in states with governments infringing on your natural rights. 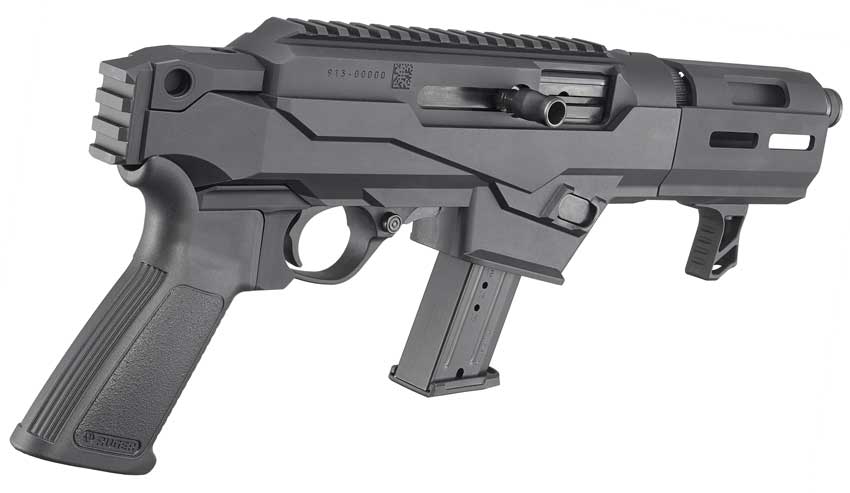 This new handgun has a pair of Picatinny-type rails. The first is integrated into the top of the receiver and is for the addition of a red dot or another optic.

The second rail is at the back of the receiver. This allows for the addition of an arm brace or stock. Without getting into the weeds of federal law, make sure you obtain your tax stamp prior to attaching a stock.

Left-handed users are accommodated with the PC Charger pistol. Both the bolt handle and the magazine release are reversible.

Integral QD sockets are located on both sides of the pistol. These allow you to rapidly connect a sling.

Ruger offers suggestions to dealers on how to price its firearms. The suggested price is $799. However, your dealer can sell the guns for less (or more) depending on supply and demand.

The timing of this pistol is interesting. While the United States deals with a pandemic, there has been an increase in the sales of firearms and ammunition. I believe this gun would be a moderately good seller, but in the current environment, the new Ruger PC Charger Pistol might be quite the hit.

I anticipate that this gun will be a solid shooter as it is based on the PC Carbine. The PC Carbine impressed me both for its reliability and its build quality. It was a very accurate gun to 50 yards and still reasonable out to 100.

Now, if the company included some hand sanitizer or a roll of toiler paper with it, it would sell out very quickly.

I just watched a video review on YouTube of this gun. And guess what, the barrel of the PC Carbine can be used on the PC Charger. The shooter put a fluted PC Carbine barrel, a folding stock and red dot site on the Charger it was awsome.

Swapping the PC rifle barrel is fine but adding a folding stock or any stock requires a $200 Tax Stamp.

I would like to see this firearm, and the 22 Charger, to be developed with options. Thus options of a carbine barrel for both. And either a arm brace or folding stock.

Thus with both firearms we could either use it as a pistol or carbine.

Does anyone know where I can get a replacement foregrip for the PC Charger? I want one I can wrap my hand around.