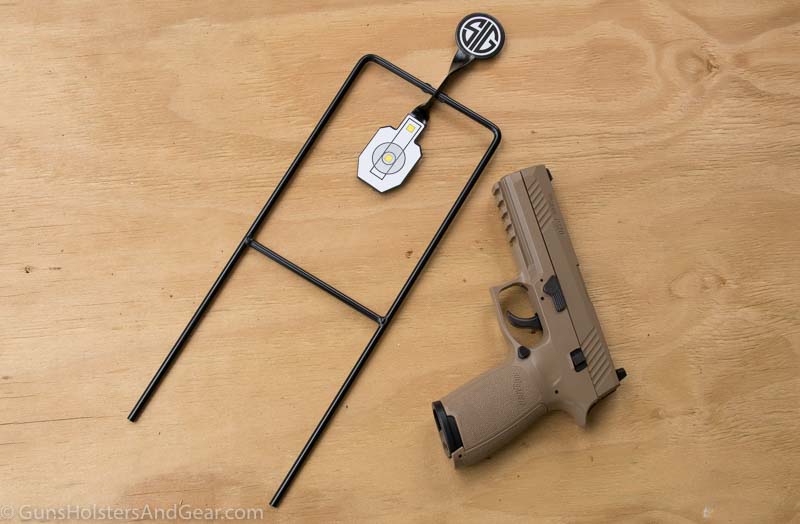 When shooting, few things are as satisfying as the “ting” you hear when hitting a metal target. This is true with both firearms and air guns. “Shooting steel” is fun, but requires additional safety precautions and can be more expensive that punching holes in paper.

In this SIG Airgun Reflex Target review, I take a look at a metal spinner that recently came on the market. Specifically, I look at its usefulness with both air pistols and rifles and if it is a good value.

This is a spinner type target with a heavy IPSC-style target below and a round target above. The two targets are held by a centerpiece that allow them to spin when struck with sufficient force. 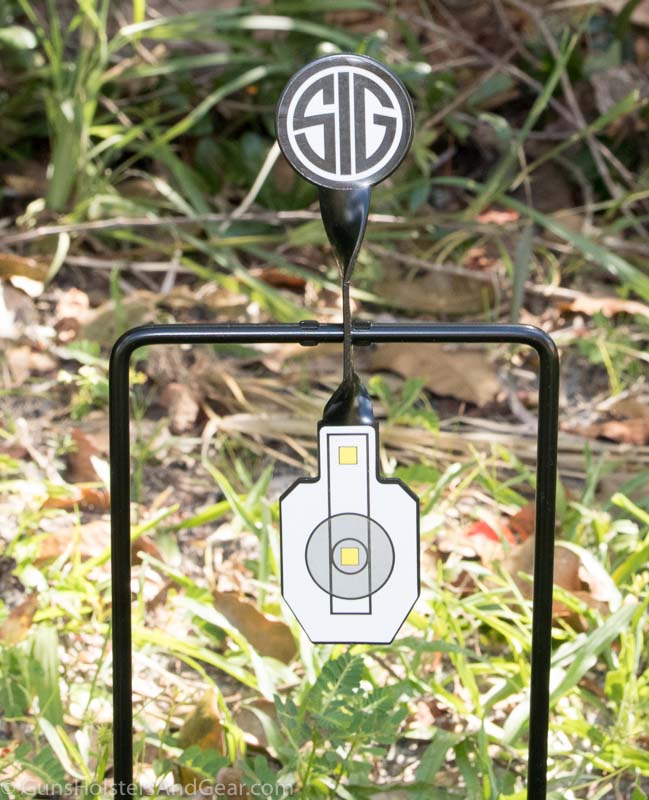 The targets are mounted on an A-shaped (well, old LCD display style A) frame that can be easily pushed into the ground. SIG ships these already assembled, so you don’t need to do anything to be up and running on it quickly.

SIG includes additional decals for both the top and bottom targets. As the target is shot and the older decals are damaged, these can quickly be slapped on for a fresh look.

I was a bit surprised when I picked up the box this target came in. It seemed a good bit smaller than I expected. I thought it might need assembly and would be larger when I put it together. In actuality, the Reflex Target was completely assembled in the box and was even smaller than I imagined it would be.

One of the warnings on the box cautioned against using the target at any distance less than 25 yards. For anyone used to shooting on steel targets, this is not a surprise. Any projectile hitting a hard metal target may bounce back toward the shooter. I’ve seen people injured in this way when shooting centerfire pistol rounds.

Shooting on this target, some of the lead pellets did bounce back. Many did not, but more than a few did. It is important to not only mind your distance to the target, but to also wear eye protection.

In my view, the problem is that the IPSC-style target is too small for enjoyable shooting with many airguns. The target is about 1.5″ wide and about 2.5″ tall. Many shooters would have problems keeping rounds on that target with a quality rimfire pistol at 25 yards. 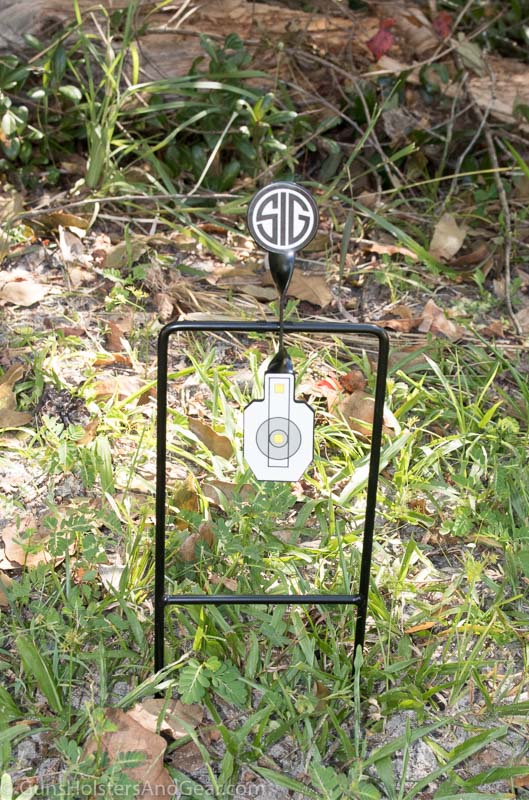 I started out with shooting this target with the SIG SAUER P320 air pistol. While the P320 air pistol was reasonably accurate, it was simply not precise enough for fun shooting on the SIG Airgun Reflex Target. Air pressure variations can cause changes in the pellet’s trajectory. While these are less noticeable at 3-7 yards, they can be quite obvious at 25 yards.

With the 12g cartridges in the P320 air pistol, the grouping was simply too large at 25 yards for me to reliably hit the target – even when using a rest. This is, perhaps, a failing of the gun and not the target. However, since SIG sent the target with the pistol for me to evaluate, I am pairing them together for this review.

However, I also shot the target with a pair of air rifles: a .22 caliber Crosman Nitro Piston air rifle (this is an older design similar to the Benjamin Trail Nitro Piston 2) and a .22 caliber Hatsan USA Gladius air rifle. Both of these guns are accurate and precise. This means I can put the pellet where I want not just once, but make good groups as well.

Both of the rifles were much more fun to shoot on the target. Generally speaking, if I did my job when pulling the trigger, I would ring the spinner without fail.

The metal target held up well to both .177 and .22 caliber pellets. I saw very few marks on the paint from the .177 pellets fired from the pistol. Both rifles made more obvious marks on the target, but neither ruined it.

I do not recommend getting the SIG Reflex Target if you only plan on shooting it with the P320 air gun or some other common air pistol. The accuracy of these guns is oftenÂ  not precise enough to achieve reliable hits on the relatively small target area from 25 yards.

However, it is a much better choice with a quality air rifle. With an air rifle – especially one that has a regulated air supply – this target can be quite fun to shoot. The Reflex Target has a suggested retail price of $15.99. (See the Amazon price here.)

For my money, I would pass on this spinner target. I get as much fun out of shooting rocks set on top of a log as I do with this. It’s not a bad product, just a bit small for what I want. However, I enjoyed the SIG Airgun Quad Shooting Gallery a great deal, and you may wish to take a look at it.

With all of my airgun reviews, I want you to know about any influences that might have added some bias to the article.

This target was provided to me by SIG SAUER for the purposes of a review. It was part of several air gun products sent to me including the SIG P320 air pistol mentioned in this article. Another is the Texas Star Spinner Target reviewed here.

No compensation of any kind was offered or provided by SIG SAUER to write this review. SIG SAUER is not an advertiser, nor are we in any talks for them to be one.

I do not hold any business interest in any air gun or firearms company.

If you have any questions about the review, please post them in the comments section below. I’m happy to clarify information or provide details that I may have left out.