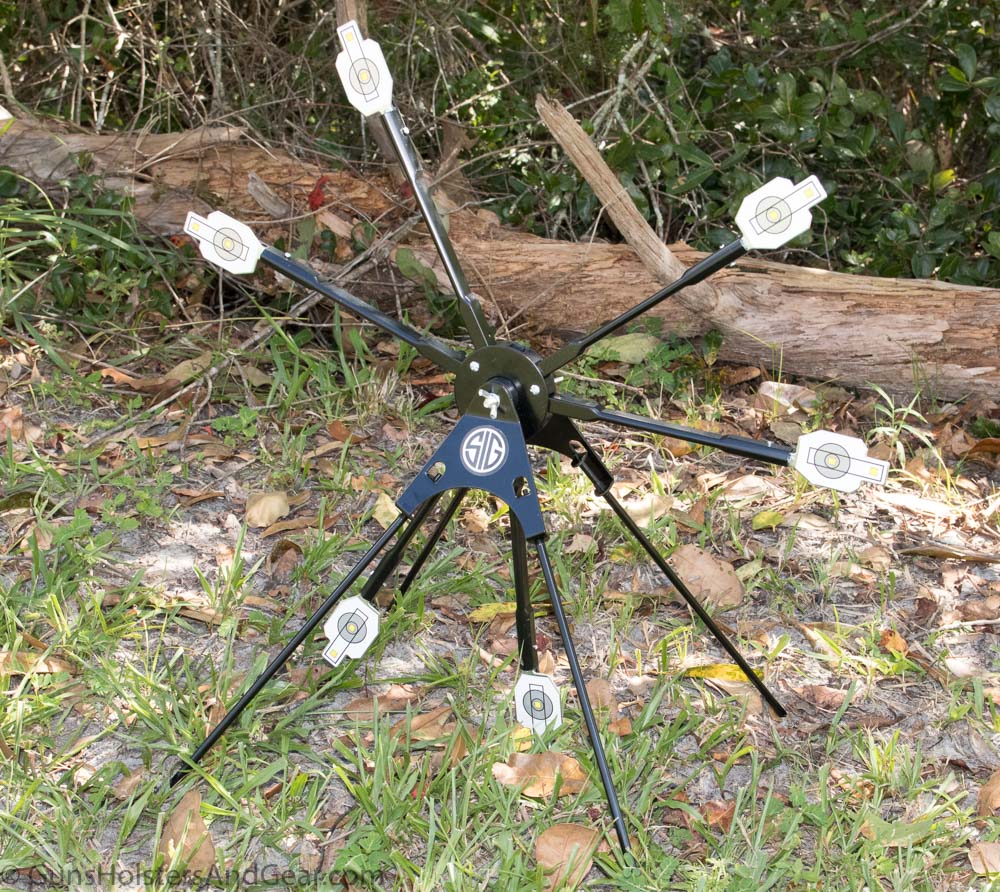 Few things are as challenging or fun for the new competition shooter than a Texas star target. SIG SAUER decided to bring its interpretation of the concept to the airgun market. Today, I present my SIG Airgun Texas Star Spinner Target Review.

I did not have a good experience with this product. While the company will be disappointed by my opinions on the target, I hope you can use them when making a decision on what kind of airgun target to buy for your needs. You can also check out my other airgun accessory reviews here.

SIG SAUER seems to have undertaken an aggressive expansion of its product offerings in the firearms and gun-related markets. From sound suppressors to ammunition to optics, the company is attempting to be a one-stop shop for shooters. Part of the company’s offerings include a number of airgun products. The one I’m reviewing today is the Texas Star Spinner Target.

Texas star targets are frequently seen in action pistol shooting competitions. They have a number of targets at the end of “spokes” attached to a center wheel. When on of the targets is shot, the balance between the targets changes and the remaining targets begin to spin. The below video shows a centerfire version of a Texas star target being used:

The SIG version of the Texas star has nine arms. Each arm has a single IPSC-style target attached to it.Â SIG ships this unassembled, so you will have to put it together when it arrives.

SIG recommends that you use only lead pellets with this target. Additionally, the company specifically states to not use steel BBs with the target. Presumably that is because the round BBs have a high likelihood of bouncing back at you.

Texas star targets can be challenging to shoot. Since I enjoy a good challenge, I was looking forward to trying this out with the new SIG P320 air pistol. However, I was disappointed by this product.

The first problem I ran into was during the assembly of the Texas Star Spinner: three of the target arms would not stay in place. SIG uses a set of wing nuts to sandwich the nine target arms between two plates. The idea is to slightly loosen the wing nuts, slide the arms in between the plates and then lock down the wing nuts.

The problem was that the three arms – all spaced equidistant from each other and perfectly in the middle of each of the wing nut pairs – would not stay in place. Yes, I followed the directions provided by SIG. I could slide the arms in between the two plates, but the nuts could not be tightened enough to hold them there.

Without the three arms, I was still able to use the target. 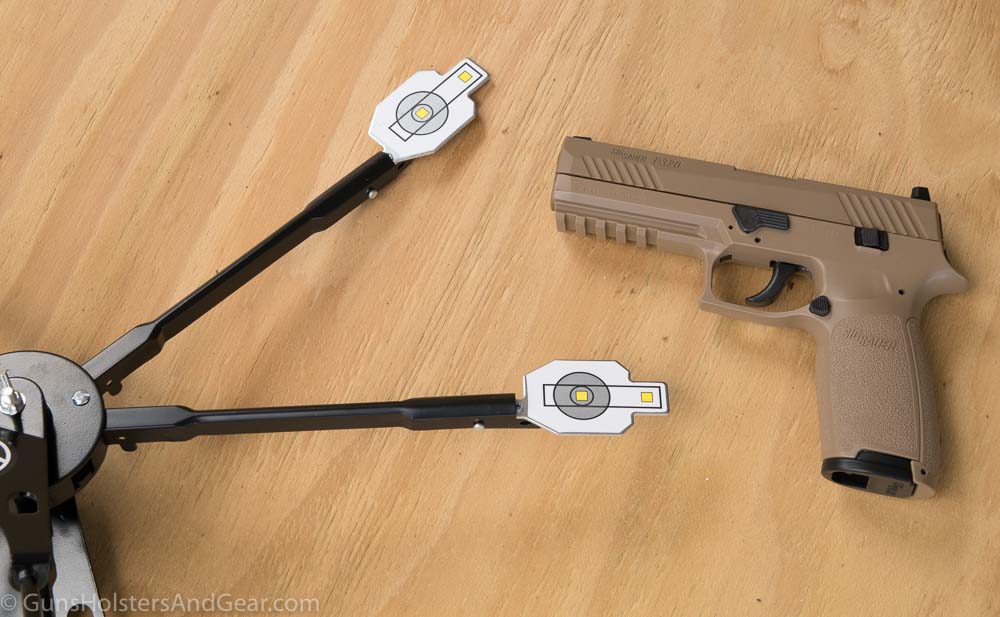 Like the Reflex Target I previously reviewed here, SIG warns that this Texas Star Spinner should not be used at distances of less than 25 yards. Unfortunately, the IPSC-style targets are of the same size as the Reflex Target. Shooting a spinning 1.5″x2.5″ target at 25 yards with a variably accurate pistol is the definition of frustration – not challenge.

Keep in mind that the P320 air pistol was sent to me by SIG with this target for use together. As such, I evaluated it based on the intent that they work together.

To make better use of the target, I moved within the minimum safe distance. As a result, multiple pellets went zinging back past me while shooting. Make sure you wear quality eye protection, jeans and a long sleeved shirt should you decide to violate SIG’s safety instructions. I do not recommend it.

With a Hatsan Gladius air rifle, I found shooting the targets to be easier. The movement introduces an acceptable challenge – and one that will humble even very good shooters. However, any misses you know are on you because the rifle itself is inherently precise.

If I use the Texas Star Spinner in the future, I will apply a little JB Weld to the arms to complete the assembly. However, due to the relatively small size of the targets, I doubt I will pull it out for another round of shooting with an air pistol.

I do not recommend the SIG Texas Star Spinner. My sample simply had too many drawbacks. Even if the target assembled properly, the targets themselves are too small to be reasonably used for pistol shooting when following the minimum safe distance.

At this time, I do not have any alternatives to recommend based on personal experience. The Air Venturi Medusa Airgun Target looks similar to this one, though with small round targets instead of the IPSC-style ones.

The Air Venturi product does offer two significant advantages. First, the minimum safe distance is listed as 10 yards when using .177 caliber pellets at a velocity not exceeding 600 fps.

Secondly, the paddles can be reset by shooting them again. When shot, they flip into a second position that can be shot again. Think of it like a dueling tree…but in a circle. At around the same price as the SIG product, I would rather try the Medusa.

I encourage anyone who has suggestions for a quality Texas star type airgun target to list them in the comments section below.

Every review you read should include a disclosure from the author about potential biases that would affect his or her writing. If you don’t see one, you should be extra cautious about the information presented.

This Texas star target was provided to me by SIG SAUER without cost for review. No promises were made nor sought for a positive review of the product. No money or other compensation was given or offered to write the review.

I do not have any financial interest in any airgun or firearms company.

If you have any questions, feel free to post them in the comments below.